Jane McDonald discusses her father as she cruises Scotland

Carnival Cruise Line, one of the world’s leading cruise companies, has introduced a new fine for bad guest behaviour. It said this was after an increase in “agitated behaviour”.

Carnival has introduced the new warning on its Cruise Ticket Contract and said bad behaviour will not be “tolerated”.

Passengers are warned: “Any guest whose conduct affects the comfort, enjoyment, safety or well-being of other guests or crew will be detained onboard and/or disembarked at their own expense and will be banned from sailing on Carnival in the future.

“Any violation of this clause may result in a fine to the guest in the amount of $500 (£430) and reimbursement of expenses incurred by Carnival as a result of the detainment of disembarkation.”

Expenses could run to thousands of dollars if the cruise line has to detain or disembark a passenger. 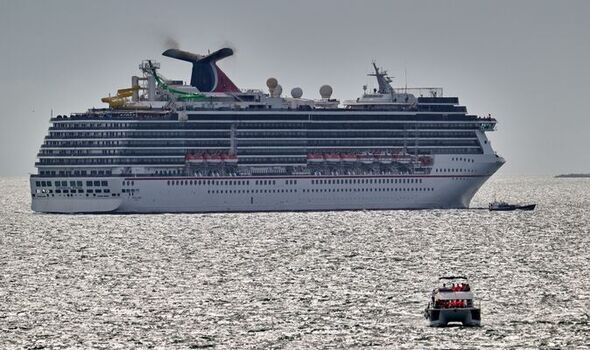 A Carnival spokesperson told Express.co.uk: “Cruise ships, like virtually all parts of travel and tourism – including airlines, amusement parks, sporting events and camping facilities – are experiencing an increase in more agitated behaviour by a small number of guests.

“Our commitment to the health, safety and security of all of our guests and team members is being demonstrated through the implementation of various measures to assure that our ships remain a welcoming, family-friendly place, including a revised guest code of conduct.”

Carnival’s Code of Conduct also asks people to supervise children, keep noise in hallways to a minimum, follow queues and show a spirit of community.

Recently, it said it may introduce a curfew for under 18s which would require them to leave public areas by 1am.

The curfew would not apply if under 18s are accompanied by an adult aged 21 or over in their own group.

In September, a video of a poolside mass brawl on a Carnival cruise ship went viral on social media.

The video showed two groups arguing verbally before the altercation became violent and a man began hitting a woman.

The fight went on until members of the cruise line’s security team intervened to separate the groups involved.

In 2018, The Carnival Legend cruise ship was forced to make an unscheduled stop to remove 23 members of the same family.

The ship had to stop in Eden in New South Wales to remove the Melbourne based family who had been involved in a brawl.

After that incident, the cruise line said it had a “zero tolerance” approach to “excessive behaviour that affects other guests”.

Guests who break rules on behaviour may be detained in a cruise ship brig or asked to leave the ship at the next stop.

In some cases, local police may become involved and will meet the ship at the port to disembark the passenger.

Recently regular cruise passengers said they thought the hot tub was often the site of unruly behaviour on a ship.

Mixing alcohol and hot water can raise peoples’ temperatures and may influence their behaviour.

Passengers have also been known to argue over seats by the pool or over ship buffet etiquette.