Inside, it’s equally unique – the Venetian-American couple who own it have gone for a sober palette of lagoon colours (eau de nil, grey, a hint of blue) paired with antiques they’ve done up themselves (they have a furniture restoration business).

It’s an intimate space, with just five rooms spread over two “wings” and communal areas including a courtyard and canalside living room-slash-kitchen, where continental breakfast is served and guests can cook for themselves. Owners Daniele and Brittany are hands-on hosts, and the feeling is of a chic friend’s house, rather than a B&B.

I’d never normally suggest a chain hotel, least of all in a city like Venice. But the Papadopoli, which opened in 2005, is part of MGallery Collection – Accor’s slick design-focused portfolio.

And it really is gorgeous. Just one bridge away from the Piazzale Roma bus station and about seven minutes’ walk from the train station, it still feels like you’re in Venice proper, with a canal wrapping round two sides, and the main façade overlooking the neoclassical Tolentini church and the Iuav architectural university, its entrance designed by Italian starchitect Carlo Scarpa. The back opens onto the Giardini Papadopoli park, one of the few green spaces in this watery city.

There are 96 rooms – too many to feel intimate, but not enough for a busy hotel feel. They’re snug, but stylish, with a brilliantly modern take on traditional Venetian styling (think damask walls paired with coffered leather headboards, and Commedia dell’Arte cut-outs in the corridors, and that’s just the standard rooms – deluxe ones are even fancier). It’s worth plumping for a canal view, as you get local life along with the water – there are a couple of bars, where students have breakfast, in the piazza opposite. Not that you’ll be having breakfast there – because the one here, overlooking the Giardini, is one of the best spreads in town. 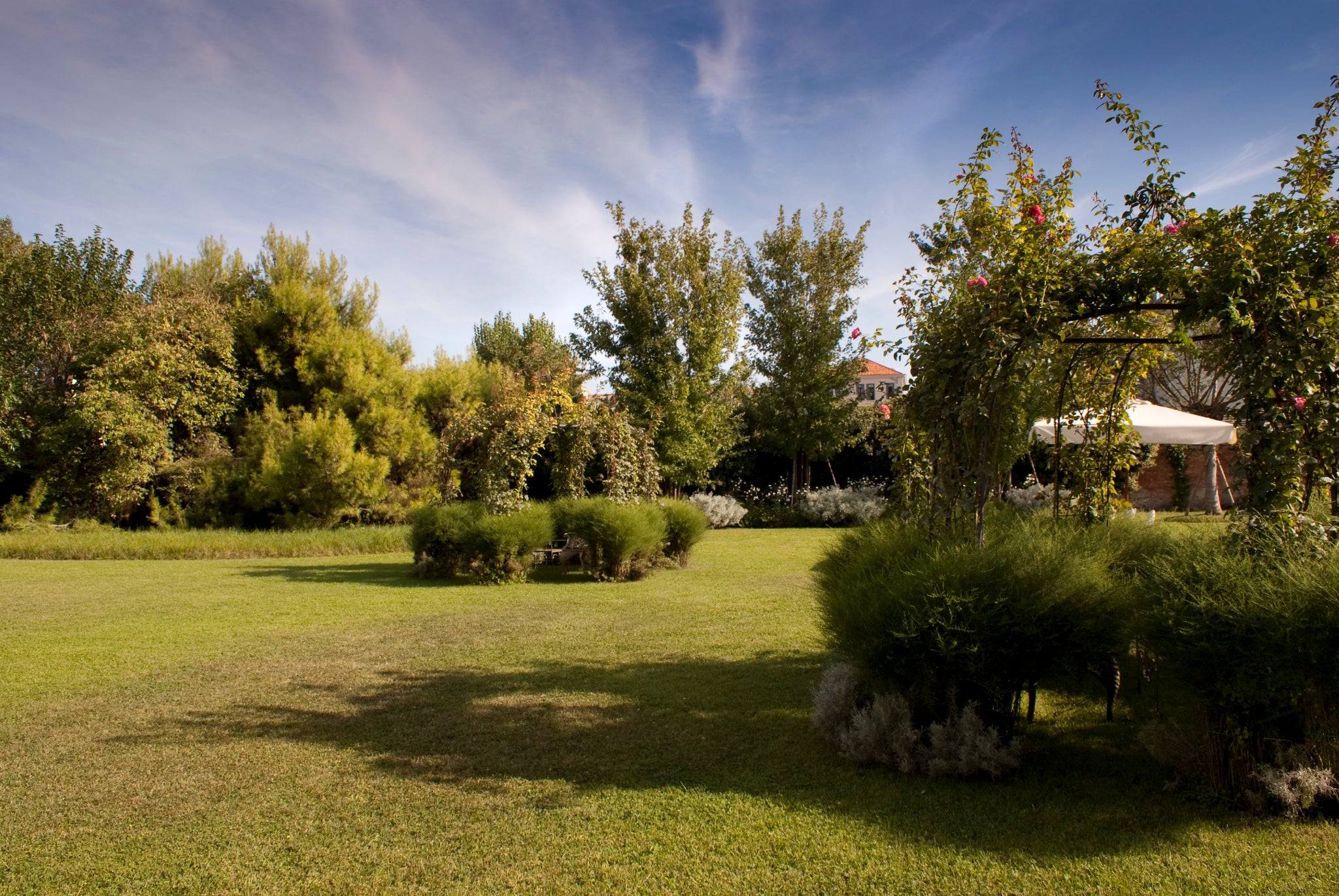 Was there ever a Venice hotel like this? Technically, yes – its sibling and neighbour, the breathtakingly pricey, Angelina-slept-here, butler-staffed Villa F. But even for those on an A-lister budget, to be honest, the Palladio is nicer. A conversion of a church and house for “fallen women” by 16th-century starchitect Andrea Palladio on Giudecca, the 58 rooms and 21 suites are spread across the main building and two blocks in the gardens.

The décor in the main building is slightly dated, as you’d expect from 16th-century digs, but the garden buildings are airy, tiki-influenced affairs, with ground-floor rooms opening directly onto the huge gardens, and a wild, flower-filled meadow breaking up the space. And if that sounds boho enough, know that the restaurant is vegan. The only thing missing is a pool. 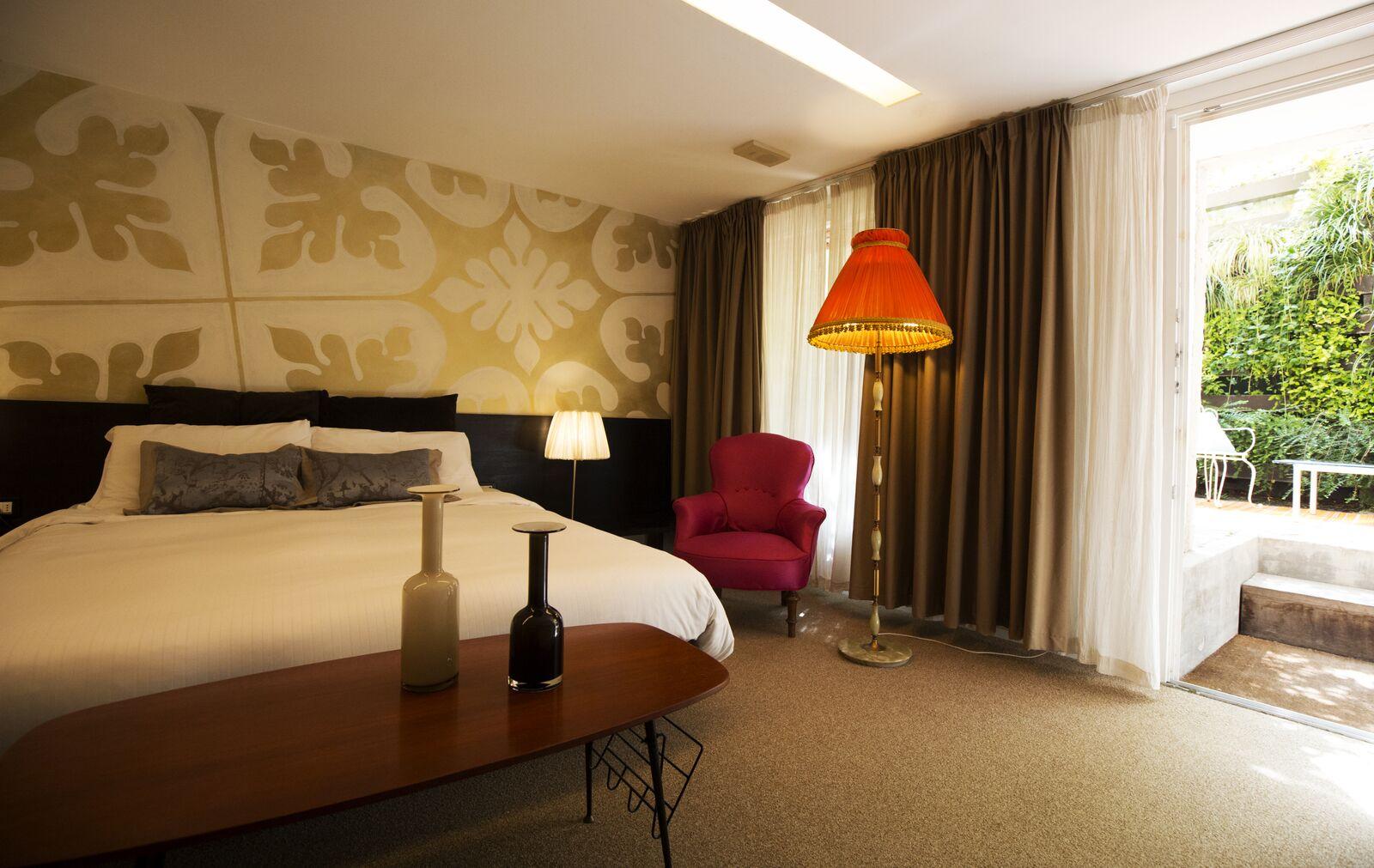 You’ll forget you’re in tourist town at Avogaria, a tiny, five-room residence at the far (read: local) end of Dorsoduro. The atmosphere is cosy – there’s even a fake cat curled up in the window – and the rooms a modern take on flouncy Venetian design (think mosaic walls and gilded mirrors), while three junior suites sport private walled gardens.

The hotel is a spin-off of the owner’s restaurant, so if it all gets too comfy, you can order the menu from room service, too. 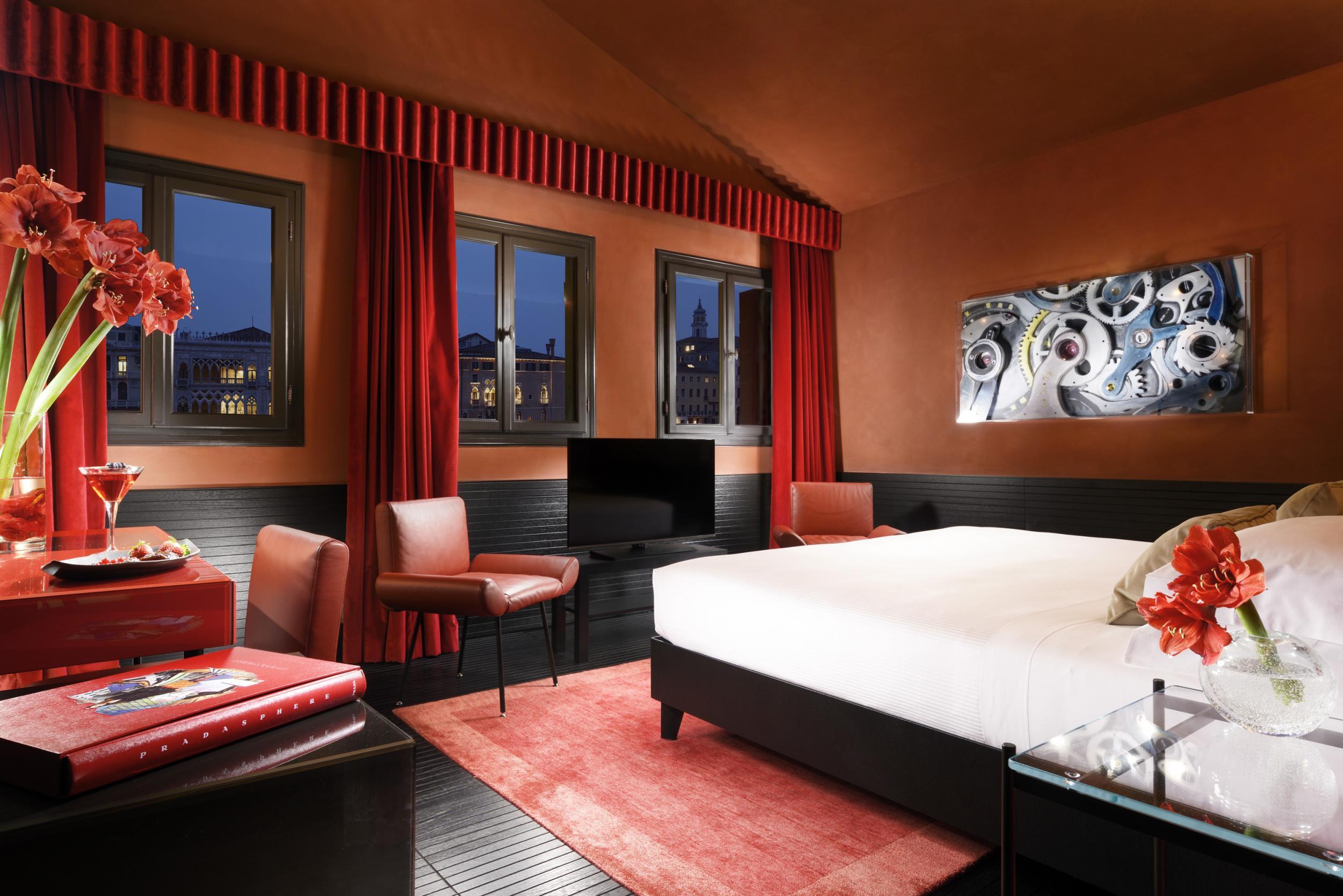 Technically the Hotel l’Orologio (Clock Hotel), it calls itself the Hotel L’O, which tells you something about the clientele. Dispensing with traditional Venetian style, the lobby is a design-led affair themed around antique timepieces, rooms have glowing cog-themed artwork above the headboards, and bright colours and semi-floating beds give a modern feel.

But despite being in the real world, at the L’O you’re also situated plum on the Grand Canal (some rooms have spectacular views), right by the buzzy bar area that’s sprung up around Rialto Mercato, so you can nip out for cichetti and an ombra (glass of wine) at Naranzaria or Bancogiro.

For a more self-sufficient stay (and to take advantage of the Rialto market nearby), the hotel has opened two apartments, both overlooking the Grand Canal. 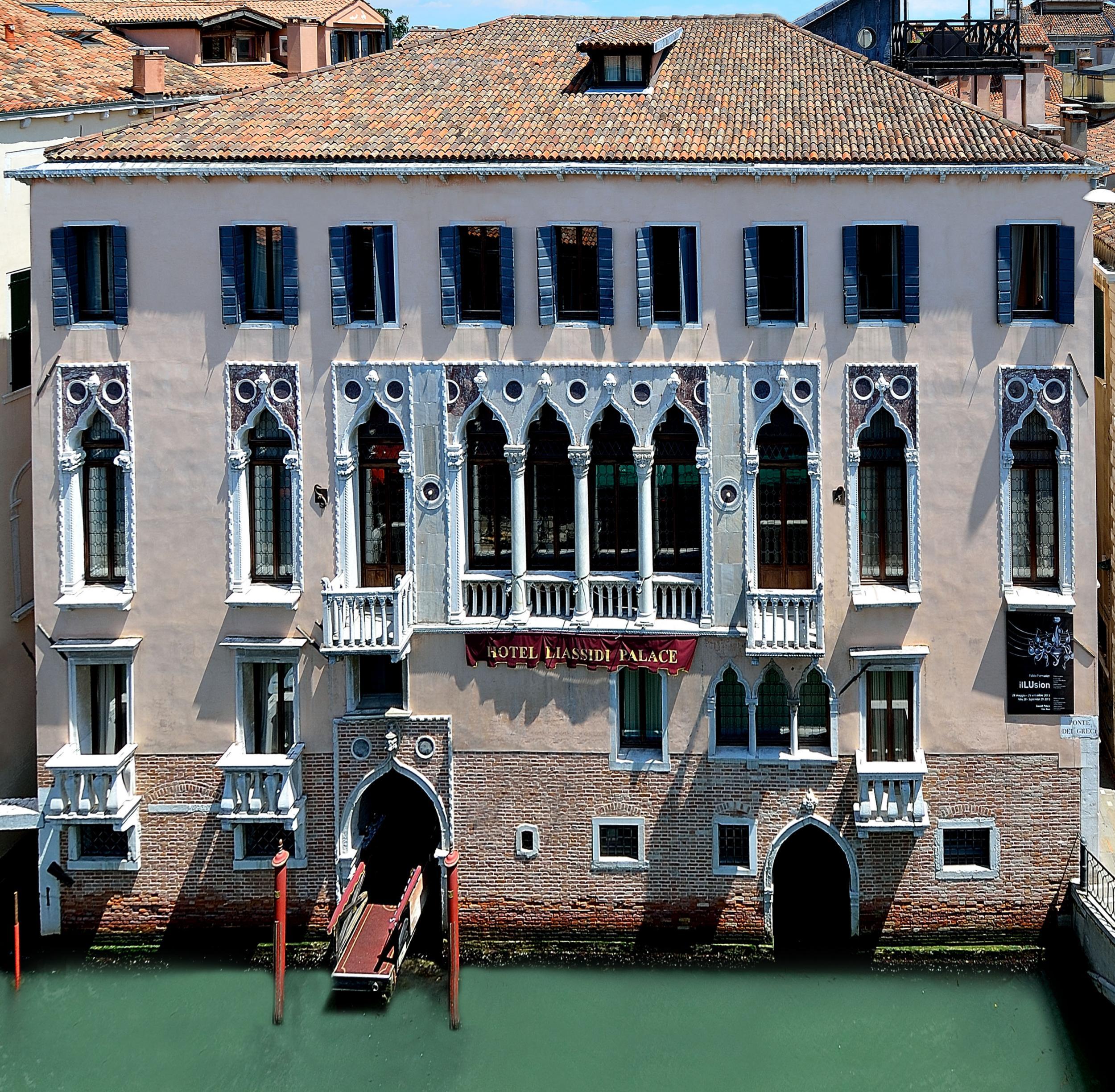 In a gothic palazzo in Castello, just east of San Marco, the Liassidi Palace has canal views, yet less of a scrum around it than those in the very centre. You’re well located for sightseeing here – the hotel sits between the Carpaccio paintings at the Scuola di San Giorgio degli Schiavoni and the Greek church with its tipsily leaning spire – as well as a quick walk to the less populated and more local part of Castello, around San Francesco della Vigna. Just 31 rooms take up the 15th-century palazzo, and the look is classic Venice, with heavy drapes, damask wall-coverings, flouncy headboards and chandeliers aplenty.

A member of the Small Luxury Hotels of the World group, it’s a good combination of affordability and intimacy, just steps from the action. 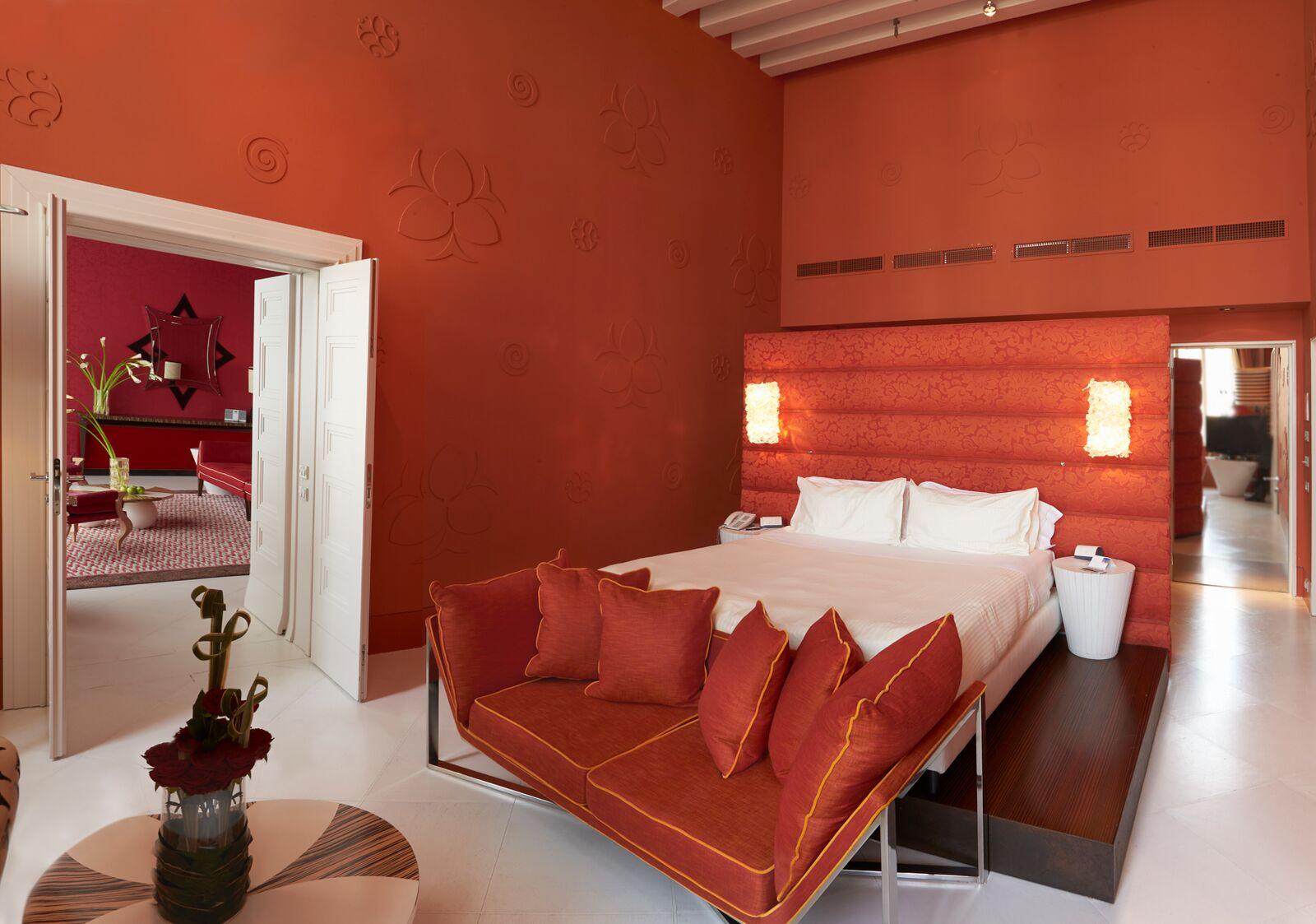 You may not want to like the Centurion Palace, if you’re in Venice for all things ancient. You may think the idea of gold-plated bathrooms – literally – is too much bling, that the modern, silver sculptures glittering in niches on the Grand Canal are “not authentic”. That the rooms – plain claret, rust-coloured, brown walls, even – are too modern for this most refined of cities. And then you’ll get there, and find your fears melt away.

It turns out that Centurion Palace is Italian-owned, modestly-roomed (there are just 50 in the vast property) and really rather lovely. The bar and restaurant both have seating cantilevered over the Grand Canal; there’s an inhouse cat, Centurione. Where other five-star hotels in Venice tend to be fairly stiff-atmosphered, the service here is notably friendly – staff are chatty, and conversations go two ways.

Walls are painted in plain, brash colours instead of swaddled in traditional damask and the corridors have modern photography rather than cod-renaissance portraits. And the Dorsoduro location is central but quiet – squished between the Salute church and Guggenheim collection, a 30-second traghetto ride from the sestiere of San Marco, but a couple of minutes to the Zattere, Venice’s most beautiful waterfront.

Doubles from €231, room only
sinahotels.com​ 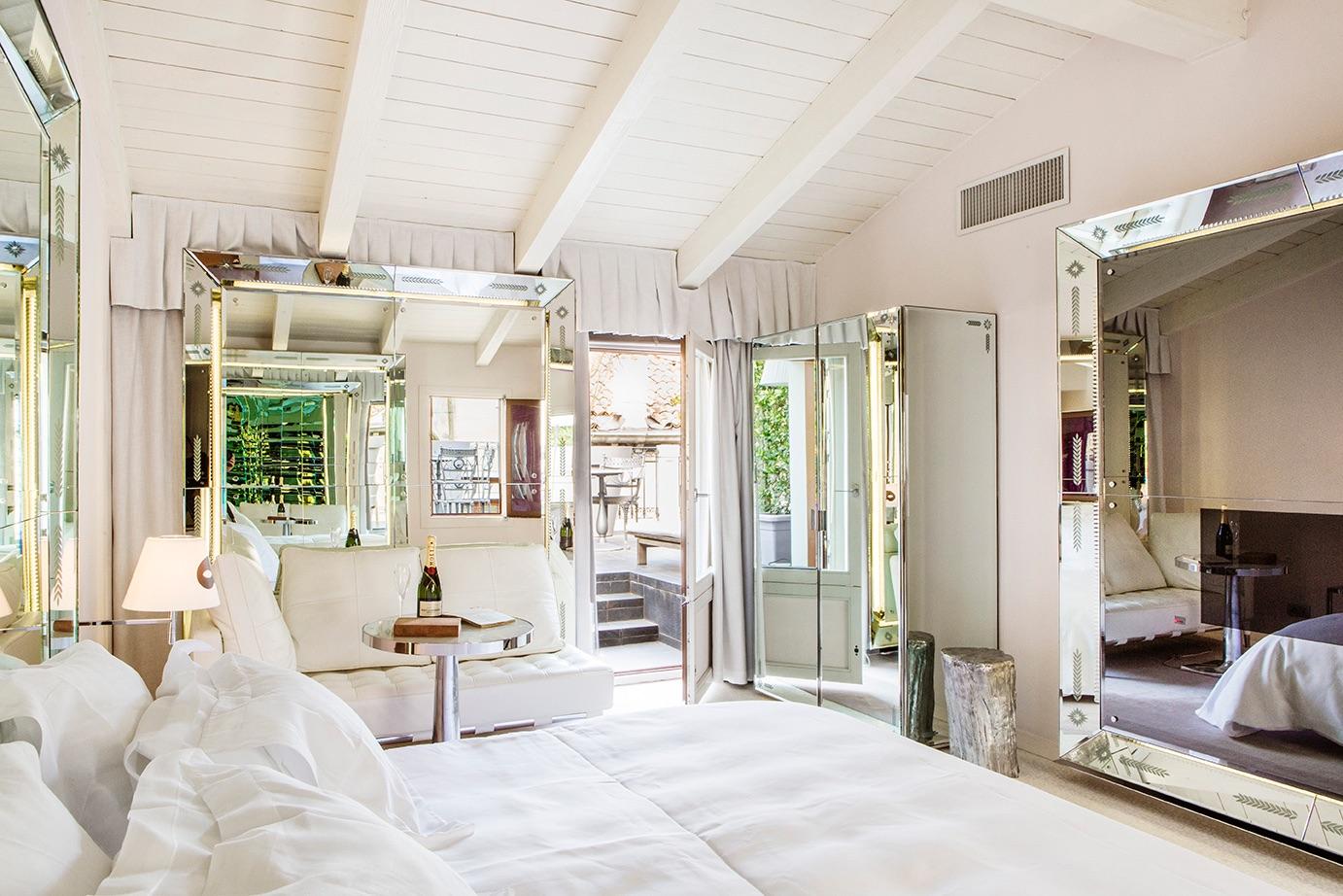 The closest Venice gets to a W hotel are these Philippe Starck-designed digs in a 16th-century little palazzo (“palazzino”) next to art gallery Palazzo Grassi. Formerly known as Palazzina G, the 26 rooms are full of signature Starck touches: mirrored walls, ceilings and chairs, carnival masks and stools that look like silver-coated tree-stumps.

Two buildings spliced together make up the hotel: one set back from the water, whose rooms overlook the alleys below, the other an elegant, slim palazzo on the Grand Canal, squished between behemoths on either side. This one is where the suites are – and they’re actually some of the best-priced Grand Canal suites you’ll find, as former guest Johnny Depp can tell you.

There’s no check-in desk here – it’s way too cool for that – but there is a “Krug Lounge” (the second in the world) and a beautiful main room – low-lit and framed by Corinthian columns – which serves as a restaurant, bar and lobby area. 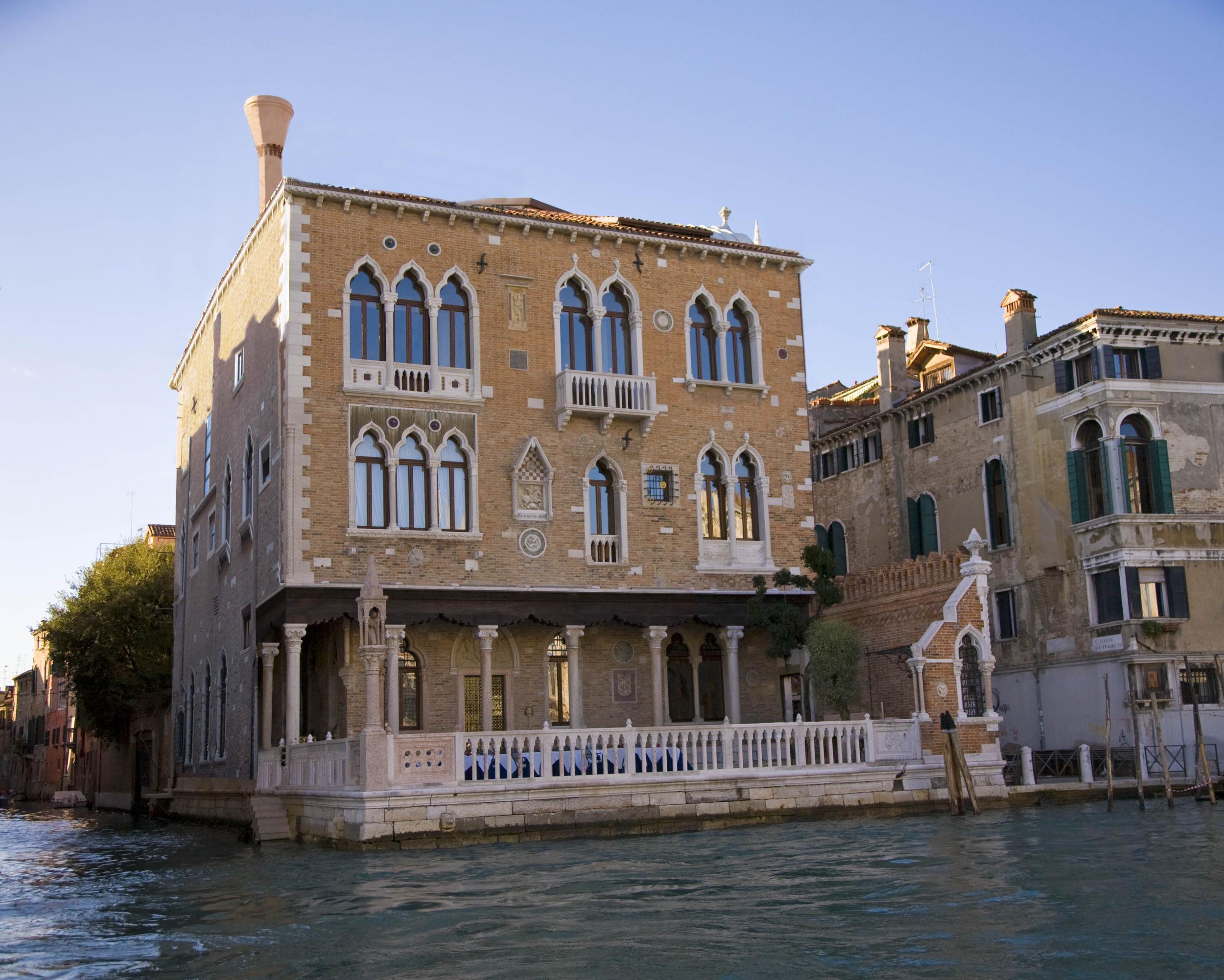 Everyone notices Palazzo Stern as the number 1 vaporetto glides up the Grand Canal and moors right beside it, at Ca’ Rezzonico. Not everyone, however, realises it’s a hotel, with its invisible signage and neat little garden, fringed by doric columns.

What used to be a house – built in the 15th century and ending up in the hands of a German art collector – has been converted into a 24-room property. The bedrooms themselves won’t win many design awards – they’re typical old-school Italian four-star – but the house itself is a gem, with a grand lobby, staircase, and rooftop hot tub. 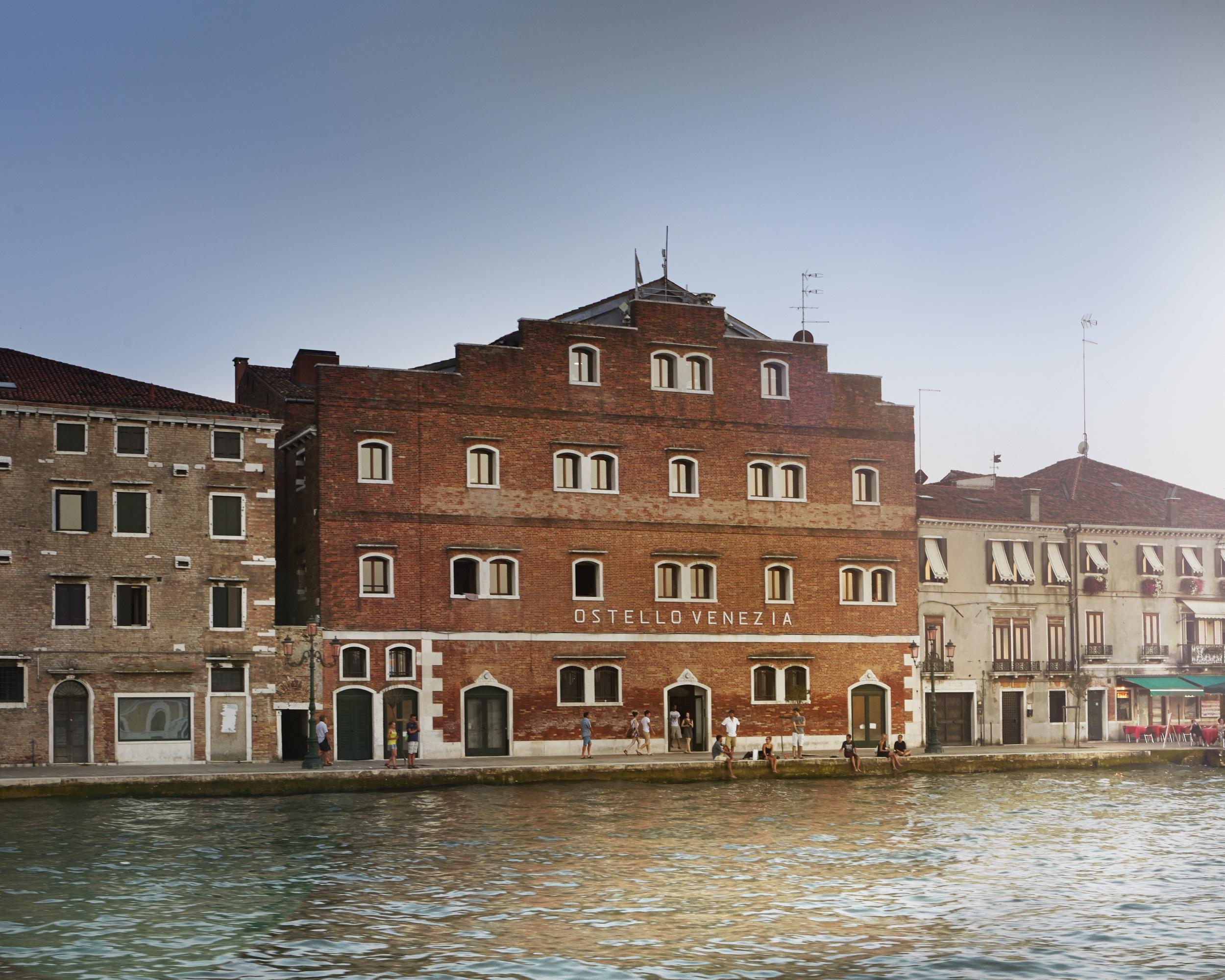 If you’re looking for a scene, here’s where to find it, in an enormous warehouse on Giudecca converted into a “poshtel” by the stylish Generator group. On warm evenings, millennials spill out onto the waterfront outside, creating their own mini movida; inside are design-led dorms (think exposed brick walls and beamed ceilings) as well as five ensuite doubles, overlooking the water and San Marco in the distance.

Dorms from €17, doubles from €60, room only
generatorhostels.com​ 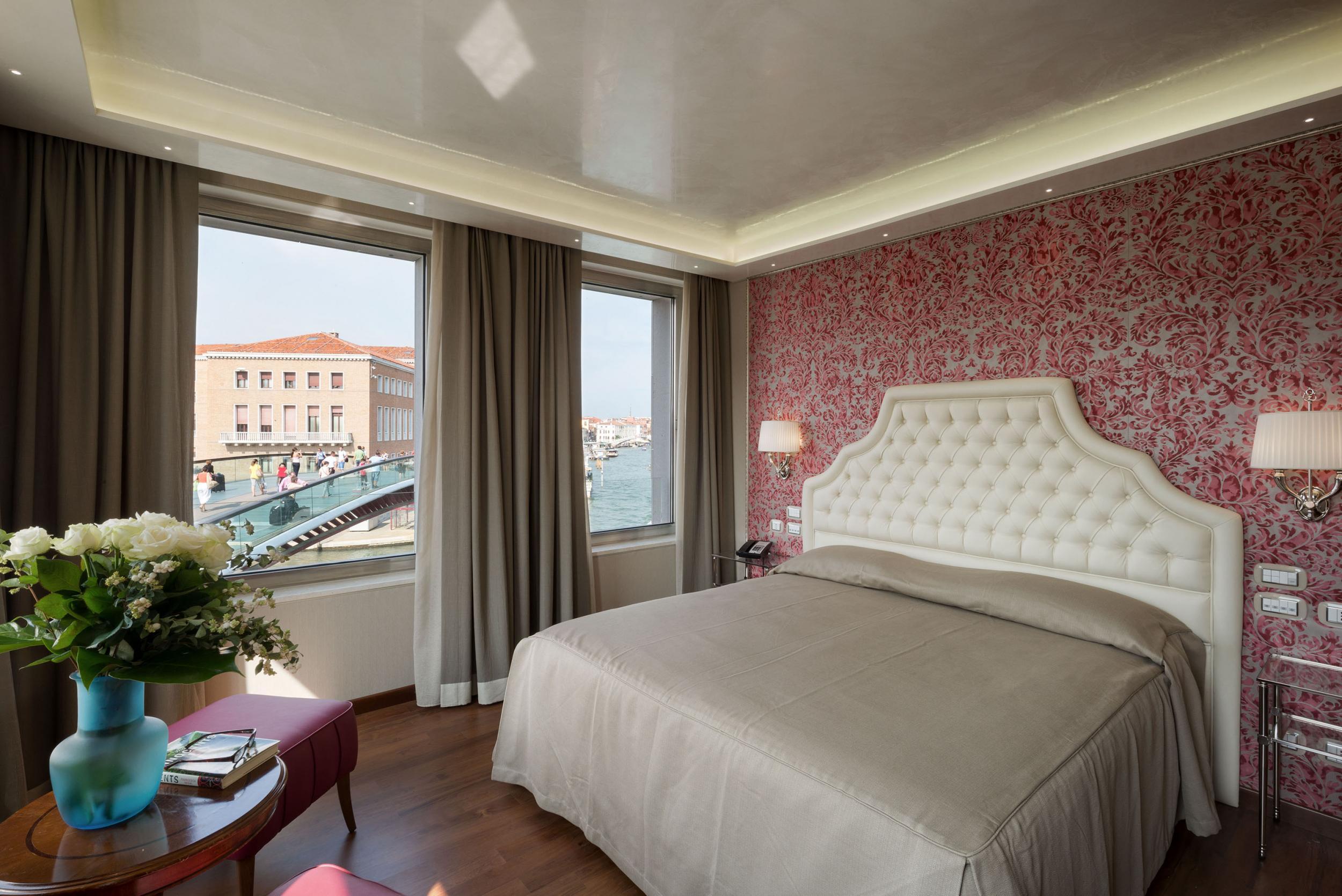 Staying by the bus depot isn’t generally the best plan. But in Venice – especially if you’re on a tight schedule, or have lots of luggage – things are a little different. The Santa Chiara sits at the mouth of the Grand Canal – not its most beautiful point, but a mere 20m from the airport bus stop. That means instead of sitting on the Alilaguna ferry to reach town (perhaps the most spectacular airport commute, but normally around 90 minutes) and then dragging your cases across bridges and around alleyways, you can get the bus from the airport to the Piazzale Roma terminus and go from Arrivals hall to your room in 25 minutes flat. Sans luggage, you can then walk to anywhere in Venice in about 15 minutes, rather than having to brave another long vaporetto ride. It is, it’s no exaggeration to say, revelatory.

The hotel is split across two buildings – a 19th-century convent and a concrete-ish modern building (adventurous or excrescence, depending on your sensibilities), which are joined in the middle so you don’t feel the split. Deluxe rooms are the ones to go for (classic rooms are in a separate annexe) – they’re modern and well equipped, with stylish feature wallpaper, comfy beds and faux walnut furniture. Breakfast is taken in a sunny room plum on the Grand Canal, while rooms can either have a canal view or one of the bus terminus behind (the latter are extremely well soundproofed, so there are no worries on that score).

The hotel is also wheelchair-accessible – as is Piazzale Roma – so if you have mobility issues, it’s an excellent base.