It’s been almost 40 years since the last time the Kilauea and Mauna Loa volcanoes were erupting at the same time. As such a rare event, it’s already brought many visitors to the island specifically to see the spectacle, while others are still wondering whether they should get on a plane and go.

The answer to that question came earlier this month from Hawaii County mayor Mitch Roth. “It’s actually a great time to come,” he said in a press conference. “People are here and seeing some of the most unbelievable sights ever, and you don’t have to go up Saddle Road. You can see [the Mauna Loa lava flow] from Hilo. You can see it from Kona. You can see it from Kau.”

In order to see both the Kilauea and Mauna Loa eruptions at the same time, you’ll have to go to Hawaii Volcanoes National Park (HVNP), atop Kilauea. The park is closest to Hilo, and it would be recommended to arrive at that airport if the park is part of the agenda.

Jessica Ferracane, public affairs specialist for HVNP, said both eruptions can be seen from Kupinai Pali (aka Waldron Ledge) or from the Volcano House, and both are easy to get to.

She also recommended visiting during off-peak hours, before 9 a.m. or after 9 p.m. Nighttime affords the best glow from both volcanoes, sometimes even when there are clouds. It’s just important to realize that the eruptions can change, or stop, at any time and that the weather can change throughout the day, which may obscure some views. 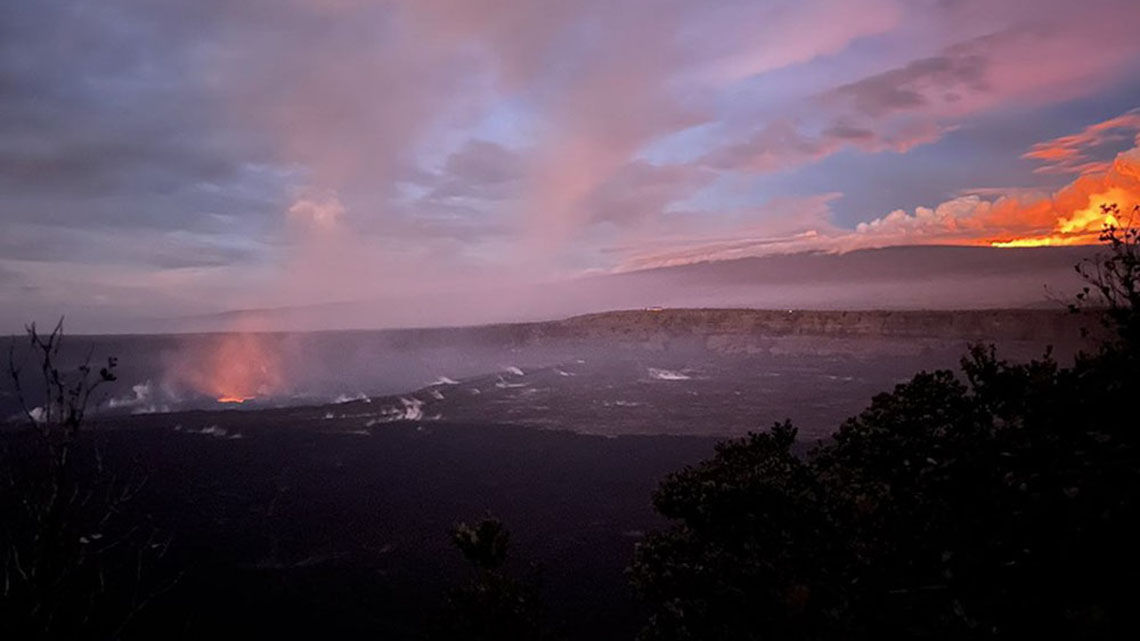 Earlier this month, a lava flow from the Mauna Loa eruption’s main opening, called Fissure 3, was threatening Daniel K. Inouye Highway (aka Saddle Road), a major highway that connects east and west Maui. As it was closing in at 1.7 miles away from the road, the lava’s supply was cut off at the top, stalling that flow. Fissure 3, however, is still erupting, but that can change at any time.

Hawaii County opened a traffic hazard mitigation route for vehicles on Dec. 1 along Inouye Highway so people could safely see the lava flow that was headed toward the highway. It’s uncertain how long that route will remain open, since the flow has stalled, but it’s something to check when arriving on the island, since it’s another view of the volcano.

The Mauna Loa trails in HVNP are closed, and the county warns people not to hike to the lava in any way because it’s trespassing and dangerous. Not only is volcanic rock sharp and can break beneath your feet, but the area near the traffic hazard mitigation route is part of the Pohakuloa Training Area, a military training ground, where unexploded ordnance was found recently.

The county is also asking people to be respectful as they visiti the viewing spots around the island. The volcanic eruptions are representative of the Hawaiian deity, Pele, and Native Hawaiians are actively visiting the sites for prayer and to give offerings to the goddess. It’s not polite to take photos or bother cultural practitioners who are amid protocol.

Understanding these do’s and don’ts and where to see the rare sight will provide for a better trip when a decision is made to go. Though no one is ever sure, the Mauna Loa eruption is not expected to last longer than a few months (based on past data) — maybe even shorter than that — so the sooner that decision to visit is made, the better.