On top of a striking new exhibition hall in the southern 15th arrondissement of Paris, the world’s largest urban rooftop farm has started to bear fruit. Strawberries, to be precise: small, intensely flavoured and resplendently red.

They sprout abundantly from cream-coloured plastic columns. Pluck one out to peer inside and you see the columns are completely hollow, the roots of dozens of strawberry plants dangling into thin air.

From identical vertical columns nearby burst row upon row of lettuces; near those are aromatic basil, sage and peppermint. Opposite, in narrow, horizontal trays packed not with soil but coco coir (coconut fibre), grow heirloom and cherry tomatoes, shiny aubergines and brightly coloured chards.

“It is,” says Pascal Hardy, surveying his domain, “a clean, productive and sustainable model of agriculture that can in time make a real contribution to the resilience – social, economic and also environmental – of the kind of big cities where most of humanity now lives. And look: it really works.”

Hardy, an engineer and sustainable development consultant, began experimenting with vertical farming and aeroponic growing towers – as those soil-free plastic columns are known – on his Paris apartment block roof five years ago.

This space is somewhat bigger: 14,000 sq metres, the size (almost exactly) of two football pitches. Coronavirus delayed its opening by a couple of months, but Nature Urbaine, as the operation is called, is now up and running, and has planted roughly a third of the available space.

Already, the team of young urban farmers who tend it have picked, in one day, 3,000 lettuces and 150 punnets of strawberries. When the remaining two-thirds of the vast rooftop of Paris Expo’s Pavillon 6 are in production, 20 staff will harvest up to 1,000kg of perhaps 35 different varieties of fruit and vegetables, every day.

“We’re not ever, obviously, going to feed the whole city this way,” cautions Hardy. “In the urban environment you’re working with very significant practical constraints, clearly, on what you can do and where. But if enough unused space – rooftops, walls, small patches of land – can be developed like this, there’s no reason why you shouldn’t eventually target maybe between 5% and 10% of consumption.”

Nature Urbaine is already supplying local residents, who can order fruit and veg boxes online; a clutch of nearby hotels; a private catering firm that operates 30 company canteens in and around Paris; and an airy bar and restaurant, Le Perchoir, which occupies one extremity of the Pavillon 6 rooftop. 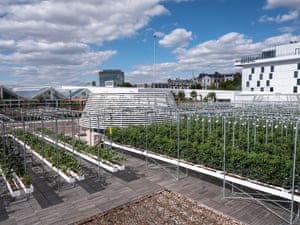 Perhaps most significantly, however, this is a real-life showcase for the work of Hardy’s flourishing urban agriculture consultancy, Agripolis, which is currently fielding inquiries from around the world – including in the UK, the US and Germany – to design, build and equip a new breed of soil-free inner-city farm.

“The method’s advantages are many,” he says. “First, I don’t know about you, but I don’t much like the fact that most of the fruit and vegetables we eat have been treated with something like 17 different pesticides, or that the intensive farming techniques that produced them are such huge generators of greenhouse gases.

“I don’t much like the fact, either, that they’ve travelled an average of 2,000 refrigerated kilometres to my plate, that their quality is so poor, because the varieties are selected for their capacity to withstand that journey, or that 80% of the price I pay goes to wholesalers and transport companies, not the producers.”

Produce grown using this soil-free method, on the other hand – which relies solely on a small quantity of water, enriched with organic nutrients, minerals and bacteria, pumped around a closed circuit of pipes, towers and trays – is “produced up here, and sold locally, just down there. It barely travels at all,” Hardy says.

“It uses less space. An ordinary intensive farm can grow nine salads per square metre of soil; I can grow 50 in a single tower. You can select crop varieties for their flavour, not their resistance to the transport and storage chain, and you can pick them when they’re really at their best, and not before.”

No pesticides or fungicides are needed, no soil is exhausted, and the water that gently showers the plants’ roots every 12 minutes is recycled, so the method uses 90% less water than a classic intensive farm for the same yield. The whole automated process can be monitored and controlled, on site or remotely, with a tablet computer.

Urban farming is not, of course, a new phenomenon. The mayor of Paris, Anne Hidalgo, aims eventually to have at least 100 hectares of rooftops, walls and facades covered with greenery – including 30 hectares producing fruit and vegetables. A programme called Les Parisculteurs invites local groups to come up with suitable projects for up to a dozen new sites every year.

Inner-city agriculture is booming from Shanghai to Detroit and Tokyo to Bangkok. Strawberries are being grown in disused shipping containers; mushrooms in underground carparks. Not all techniques, however, are environmentally friendly: ultra-intensive, 10-storey indoor farms that have sprung up in the US rely on banks of LED lighting and are major consumers of energy, Hardy says.

Aeroponic farming, he says, is “virtuous”. The equipment weighs little, can be installed on almost any flat surface, and is cheap to buy: roughly €100 to €150 per sq metre. It is cheap to run, too, consuming a tiny fraction of the electricity used by some techniques. 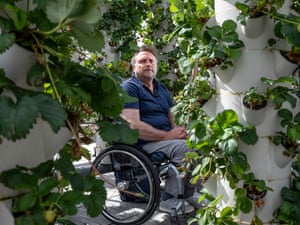 Produce grown this way typically sells at prices that, while generally higher than those of classic intensive agriculture, are lower than soil-based organic growers. In Paris, Nature Urbaine should break even, Hardy estimates, some time next year – a few months later than planned because of the pandemic.

There are limits to what farmers can grow this way, of course, and much of the produce is suited to the summer months. “Root vegetables we cannot do, at least not yet,” he says. “Radishes are OK, but carrots, potatoes, that kind of thing – the roots are simply too long. Fruit trees are obviously not an option. And beans tend to take up a lot of space for not much return.”

But Agripolis runs a smaller test farm, on top of a gym and swimming pool complex in the 11th arrondissement, where it experiments with new varieties and trials new techniques. A couple of promising varieties of raspberries are soon to make the transition to commercial production.

Urban agriculture is not the only development changing the face of farming. As with almost every other sector of the economy, digitisation and new technologies are transforming the way we grow food.

Artificial intelligence (AI) and the internet of things are beginning to revolutionise farming, from driverless, fully automated farm machinery that can sow seeds and fertilise and water soil with maximum precision to systems that monitor exactly how healthy individual animals are and how much they are producing (a concept known as the “connected cow”).

Drones, too, have multiple potential uses on farms. With the world’s bee population in steep decline due to global heating, pesticides and other factors, drones are increasingly being used to pollinate crops fields and fruit orchards. To avoid wasting pollen by wafting it randomly at crops, or the damage to individual flowers caused by drones rubbing against them, scientists in Japan have developed a system in which a drone uses what can only be described as a bubble gun to blow balls of specially formulated liquid containing pollen at individual blossoms.

With global food production estimated to need to increase by as much as 70% over the coming decades, many scientists believe genetic editing, which has already been used to create crops that produce higher yields or need less water to grow, will also have to play a bigger role.

The technique could help build plant and animal resistance to disease, and reduce waste. For example, with methane known to be a stronger greenhouse gas than carbon dioxide, research is under way into the stomach bacteria of cows in the hope that tweaking animals’ gut microbes may eventually allow them to produce not just more meat, but also less gas. 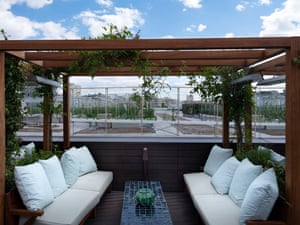 Urban farming of the kind being practised in Paris is one part of a bigger and fast-changing picture. “Here, we’re really talking about about building resilience, on several levels – a word whose meaning I have come to understand personally,” says Hardy, pointing to the wheelchair he has been forced to use since being injured by a falling tree.

“That resilience can be economic: urban farming, hyper-local food production, can plainly provide a measure of relief in an economic crisis. But it is also environmental: boosting the amount of vegetation in our cities will help combat some of the effects of global heating, particularly urban ‘heat islands’.”

Done respectfully, and over time, inner-city agriculture can prompt us to think differently both about cities, by breaking down their traditional geography of different zones for working, living and playing, and about agriculture, by bringing food production closer into our lives. “It’s changing paradigms,” says Hardy.