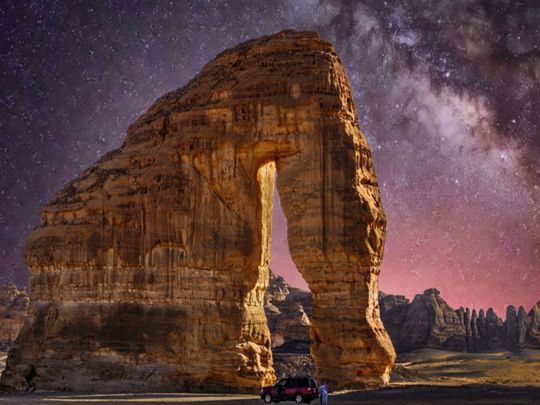 Abu Dhabi: While Saudi Arabia has strengthened its serious endeavor towards tourism transformation, and the formation of an integrated tourism destination, a tourism fund is expected to contribute to providing government financing to investors, and help complete development projects in this sector, Saudi media reported.

Saudi Arabia is moving towards the advancement of new tourist areas to enhance tourism as a vital sector and one of the channels for diversification of the national economy. The project of the tourism development fund in Saudi Arabia will contribute to providing government funding to investors, and it will also help in completing the important tourism sectors that will have rewarding returns, in addition to achieving the goals of tourism, economic and service development, experts said.

As the world is fighting the coronavirus, there have been changes in the tourist map around the world, especially after the outbreak of this pandemic and taking stringent precautionary measures to stem the spread of the disease, especially after its spread in the most important destinations of tourism in the world, whether in Asia, Europe or America.

Majid Al Hokair, Chief Executive Officer of Al Hokair Group, a major Saudi entertainment and hospitality group with 79 entertainment centers and 34 hotels spread in Saudi Arabia and UAE, said acceleration of development in the tourism sector would increase the Kingdom’s opportunities in the new tourism map, especially after the start of mega projects that will have a significant impact on the world stage and the development of natural sites in cooperation with the largest international companies in the hospitality and hotel sector, to develop the tourism sector, explore the nature of the Kingdom in all aspects and create new jobs for the people of the Kingdom.

Al Hokair added the global tourism map will differ just like other economic activities, and we would see the impact on all travel and tourism sectors, from transportation to hotels and restaurants, and all that is related to the tourism sector. “Also now, many international companies that were dependent on the world tourist traffic, especially in major cities such as Paris and London, are hit hard by the lockdown that was imposed on most activities of interest to tourists such as hotels, resorts and restaurants,” he said.

The global travel and tourism industry was estimated to be worth over $700 billion in 2020 – and it’s now forecast to be $447 billion as a result of the coronavirus pandemic.

Europe is likely to be particularly hard hit, with predicted revenue dropping from more than $200 billion to $124 billion.

Al Hokair added that the current trend of the tourism an dtravel sector is activating domestic tourism between neighboring countries such as those in Europe, other than that limited numbers of foreign tourists will go to other destinations. “Continuous warnings of precautionary protocols and bans will also affect tourism on the short and long run,” he said, indicating that the Saudi Tourism Authority focused on the marketing side and has been working on many initiatives for domestic tourism destinations, and announced an ambitious programme for this purpose, as there will be tourist destinations to Yanbu, Umluj and Jeddah, and after that Mecca will be available for the performance of Umrah, Taif, and the southern Suda and its environs.

Al Hokair suggested there will be a great dependence on domestic tourism during the coming period and factors and incentives if there is an orientation to be present on the map of future tourism is adopting exemptions and incentives, supporting destinations with attractive activities such as the Kingdom’s seasons, and creating targeted programmes for domestic tourism.

Khaled Al Rasheed, CEO of the Arab Tourist Experts Association, told Al Watan that the kingdom is an important tourist destination, featuring many different tourist attractions, the Two Holy Mosques, developed tourist infrastructure, and high spending from the state through giant projects in the tourism sector to build a global competitive tourist destination and promote it through marketing campaigns and through global events embraced by the Kingdom, such as international festivals and exhibitions, and the great tourist movement.

Al Rasheed indicated that the global tourism map is expected to witness a significant decline, and that the tourism sector will witness major losses, bankruptcy and closure of many tourist companies. “The new tourist destinations have little chance as the well-known and famous destinations that have earned the confidence of tourists will not be easily abandoned and will fight for preserving its market share,” he said.

Al Rasheed added tourism – which employs one in 10 workers worldwide, and with a proven track record for resilience during the 2008-2009 financial crisis – is also well-placed to lead future recovery, but this will take until 2023 and may reach 2025.

Experts estimate decrease in airline revenue for 2020, will amount to $314 billion.

Bloomberg reported that the tourism sector employs 300 million people, especially in developing countries, and these job opportunities can represent a way out of poverty and opportunities to preserve cultural heritage. A third of tourism-related jobs are now at risk, as airlines around the world say they are in need of about $200 billion to save it, and the low travel expenses at the regular and luxury levels show the tourism sector, whose outcome is estimated at $7.1 trillion, at risk.

• The futuristic mega city of Neom

• Qiddiya project, which will be the capital of Entertainment, Sports and the Arts in Saudi Arabia

• AMAALA project that will curate transformative, personal journeys inspired by arts, wellness and the purity of the Red Sea.

• Protect the ancient monuments and open them to visitors

Woman stays at Travelodge during Masters as it’s cheaper than uni accommodation
Airline worker shares the ultimate suitcase to take on a trip – ‘learnt that the hard way’
British tourist travel warning to check documents as Spain extends Covid rules
These are the most cringeworthy holiday snap captions
Making the leap employee to IC: Travel Weekly