From one end to the other of the postcard-perfect 3-mile stretch of white sand, the Kaanapali Beach Resort area has been hit by a wave of expansive renovations in the past two years. Now, the oldest master-planned community in Hawaii has some of the freshest room product, cutting-edge amenities and multifaceted pool complexes in all of the Aloha State.

Almost all of the work was planned prior to the onset of the Covid-19 pandemic, but several projects were accelerated or augmented during the seven-month shutdown from March to October 2020, before Hawaii launched its Safe Travels program for screening incoming travelers.

The 1,200-acre Kaanapali Beach Resort is home to shops, restaurants, condominiums and more than a dozen hotel properties. The area features a long strip of sandy beach, proximity to historical Lahaina town, top-notch whale-watching and access to numerous other activities.

“With all of the improvements that have been done, renovations up and down the coastline all at once, I think this is the biggest period of updates we’ve seen in at least the last 20 years,” said Shelley Kekuna, executive director of the Kaanapali Beach Resort Association.

“Kaanapali really has something for everyone, with a big selection and range of accommodations and a beautiful beach that’s always a draw,” Kekuna said. “For culinary tourists, the area has amazing food and is a host to the Hawaii Food and Wine Festival each year (scheduled this year for Oct. 7 to 10).

Here’s a rundown of the most recent upgrades completed or in the works at Kaanapali Beach Resort properties.

A two-phase, $30 million renovation of the Sheraton Maui was fully unveiled in January 2020.

First, a refresh of all 508 guestrooms and suites was completed in July 2018. Previously, all of the accommodations followed a similar design, but now all six buildings are done in one of three styles inspired by the three islands comprising Maui County: Maui, Lanai and Molokai.

The Anuenue and Nalu buildings are Maui-based, featuring high-contrast artwork and a color palette of warm pinks and reds. The Lahaina and Ohana buildings are themed on Lanai, with designs featuring abstract artwork and a color scheme emphasizing orange and blue tones. Finally, the Moana and Hoku buildings are Molokai-inspired, highlighting the ocean views and green and aqua tones. The resort upgraded all of the in-room televisions to 52-inch screens, and the bathrooms were redone with new vanities, tiling and a bright, modern look.

The second phase of the project touched on common areas and was completed at the beginning of 2020. The lobby was completely reconfigured with a new open-air deck offering panoramic views of the beach and ocean. The Sheraton also introduced the first lobby bar in the entire resort area, Sandbar. The lobby bar and cafe area transition from coffee and breakfast in the mornings to cocktails and small plates in the evenings. On the lower lobby level, there is a new family game room, including a digital projector and screen for movies as well as foosball, shuffleboard and video games, including vintage arcade games such as Pac-Man.

“Before the transformation, the lobby was more check in and check out, that’s it. It was very transactional,” general manager Tetsuji Yamazaki said. “Now it is more open, and there is space for people to feel comfortable, enjoy the view and hang out.” 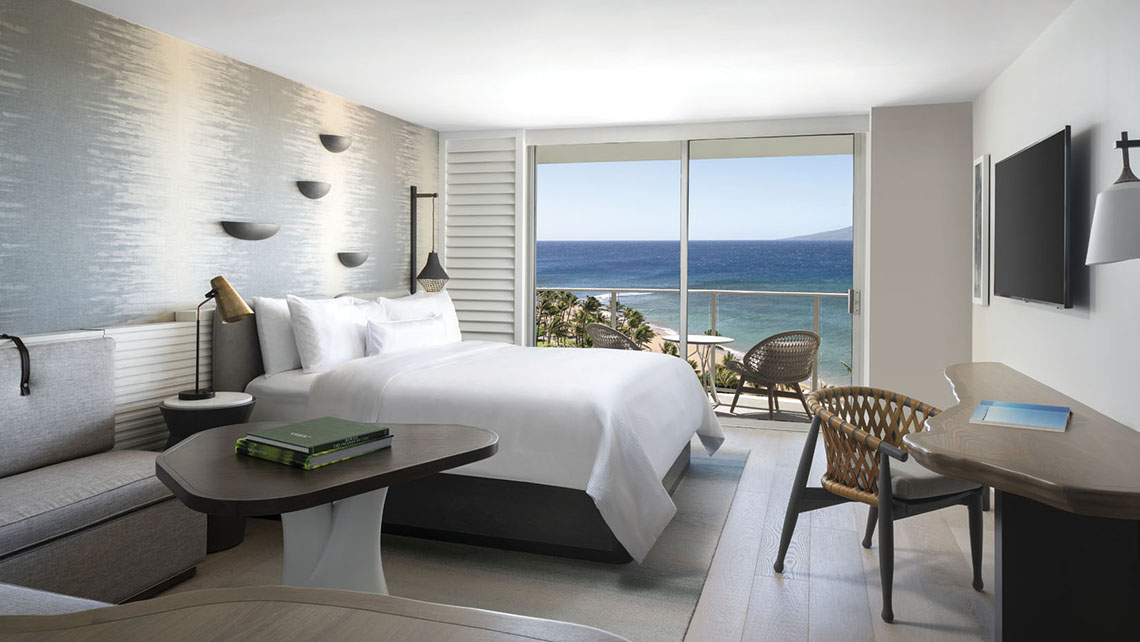 This 12-acre resort started a three-phase, $120 million renovation in 2018, with work completed in time for the reopening last November.

The revamp of the 87,000-square-foot “pool playground” included expanded seating areas, new cabanas and a redesigned family pool with swim-through waterfalls linking two connecting pools. A new adults-only infinity-edge pool has its own dedicated bar and small-plates service. The kids area was augmented with spray jets, a mini-waterslide and a waterfall.

In December, the property debuted the 217-room luxury Hokupaa tower, which general manager Gregg Lundberg called the “crown jewel” of the project. The rooms in the tower feature private balconies with glass partitions for sweeping views of the ocean. Hokupaa tower guests have exclusive access to the new Lanai at Hokupaa, a second-floor private bar and lounge with panoramic views, an infinity-edge pool and morning breakfast service in addition to exclusive programming.

The new signature restaurant, Waicoco, is helmed by Chris Kajioka, a James Beard Award finalist for Best Chef Northwest and Pacific region who refers to his cuisine as New American with Japanese influence and Hawaiian flavors.

The Hyatt Regency Maui completed an extensive renovation of its guestrooms and updated the lobby in 2020.

Guestroom closets were opened up to create a feeling of more space, and the balconies were redone with new sliding glass doors and a glass barrier for better sightlines. The bathrooms have new tile flooring, granite countertops and double sinks.

The lobby was also renovated for the first time in the property’s four-decade history.

Additionally, solar panels and other energy efficiencies were introduced.

In its biggest update since 2008, the Kaanapali Beach Hotel introduced a signature restaurant and completed renovations to two of its four guestroom towers.

The $75 million project includes Huihui, a restaurant built by the sea. Executive chef Tom Muromoto has crafted a menu focused on contemporary cuisine utilizing traditional Hawaiian foods and cooking methods. The 5,000-square-foot venue also functions as a new sailing academy for guests to learn the early Hawaiian traditions of voyaging and wayfinding.

The two guestroom towers that were significantly redesigned were also renamed: the Papaku South Wing (formerly the Kauai Wing) and Kauhale Southeast Wing (formerly the Lanai Wing). Guestrooms in those towers were revamped with modern design elements while still retaining elements of Hawaiian culture, including new employee-made makamae (precious gifts) shadow boxes in each room that contain traditional handmade Hawaiian items. The two other guestroom towers are also slated for renovations; dates for those projects have not been announced.