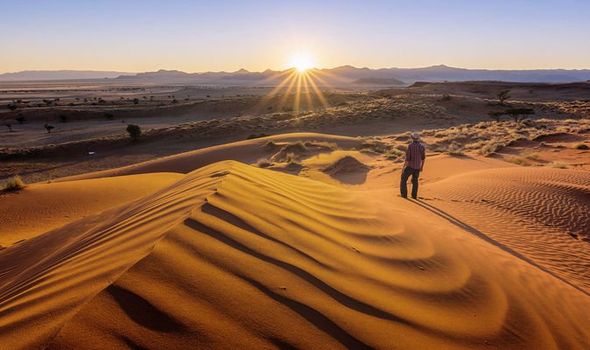 Namibia’s vast wilderness can play tricks on the eye. A combination of the shimmering heat haze refracts off the dazzling white surface tricks and teases your mind.

It’s the third day on my seven-day road trip exploring the central-eastern plateau of this beguiling country. The landscape is certainly mesmerising. If ever there was a place to fire up the artistic imagination, this is it.

In the capital Windhoek, I picked up a Toyota 4×4. A step up would have been useful to climb into the cab, but in just half an hour I’d settled into my private transport for the week, and soon I steamed out of the capital on wide-open roads.

The first leg, to Sesriem, was about 200 miles. It took far longer than imagined (six hours) but offered me the chance to get to grips with off-road driving and to take in some of the hypnotic terrain – from elaborately-patterned rock fissures resembling the lunar landscape, to a sandy white vista as far as the eye could see.

In Namibia, it’s the law to drive with lights on and a good job too. Particularly when you encounter another car. Giant plumes of dust signal their approach half a mile out. It’s not unlike a scene from the Road Runner cartoon, with the protagonist speeding through the desert kicking up a mushroom of dust, with the dogged Wile E Coyote in its wake.

And I never realised how rewarding it could be to wave at total strangers, such is the delight when you spot another car.

A simple sign marking The Tropic of Capricorn, 23º south of the Equator, sits in a desolate spot. My timing was off when it came to witnessing the sun at its highest, though, so I continued along the Gaub Pass, a series of dips, rises, gullies and ridges slicing through the rockface on the way to the quirky settlement of Solitaire. 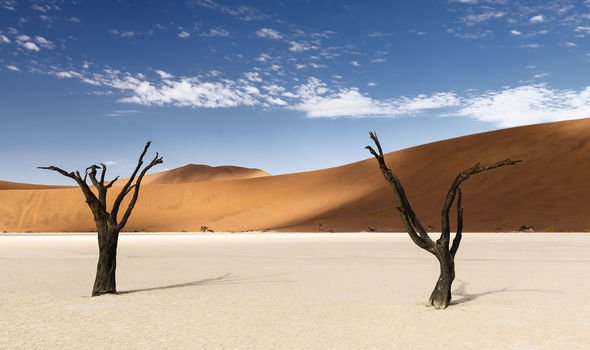 It turns out to be no more than a cafe, tyre workshop (very handy out here) and a corner store. Oh, and a graveyard of rusting car wrecks, their shells seemingly trying to haul themselves out of quicksand. Perhaps they were placed there as a deterrent to speeding drivers.

It was a welcome break close to the Namib-Naukluft Park and an excuse for a slice of the most succulent German apple pie you’ll find outside of Hamburg. I wondered whether the settlement had expanded purely on the back of its culinary offerings.

I arrive at Desert Homestead in Sesriem, a charming cluster of 20 thatched whitewashed cottages set around a smattering of outcrops, just as the sun is setting.

The craggy Rotterkaum mountains turn from golden toffee, to hot pink and finally, deep purple. A technicolour slideshow with oryx and springbok wandering across the plains.

The clock had barely ticked past 4.30 the next morning when I’m up and off to visit Namibia’s star attraction, the mighty sand dunes of Sossusvlei. Desert Homestead’s exceptional guide, Ziggy, sped over the roads like a champion, for the 40-minute drive to the gate into the Namib-Naukluft park. By 6am there was already a queue of cars.

Once inside, not only were we welcomed by the most perfect Tarmac road (a treat in itself), but a pristine, other-worldly desert landscape. This was desert proper; perfect peaks of sand, stained red due to the intense iron oxide content. 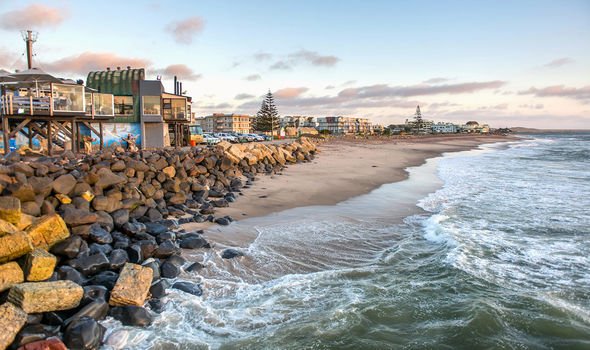 This quiet, eerie place makes you want to talk in hushed tones. There is no life, save for the hardy camel thorn trees which survive for 300 years thanks to deep, deep roots which eke out precious drops of water. Otherwise, the only life comes in the form of a lone oryx, jackal or ostrich dancing across the sandy stage.

Ziggy points out Dune No.1 before stopping at the 280ft high Dune 45, denoted by a swinging sign.

I watch people climb up its edge before sliding down on their behinds.

However, Big Daddy is the biggest draw. At 1,000ft it’s the one we’ve trekked here for, and which is the instantly recognisable face of Namibia.

Ziggy and I begin the slow climb up. The higher you go, the bigger the reveal. The “dead lake” with its naked, blackened tree trunks standing like art installations on the cracked ground is hauntingly beautiful. It’s hard to imagine anything surviving here, save the occasional oryx or jackal foraging around the car park for scraps.Landscapes don’t come any purer or more extraordinary than these.

The following morning we hit the road to Germany. Well not quite… Swakopmund, a bizarre Germanic town nestling on the wild Atlantic coastline. I chose, perhaps unwisely, to travel a B road traversing the empty plains of Hotsas and Ganab parks. 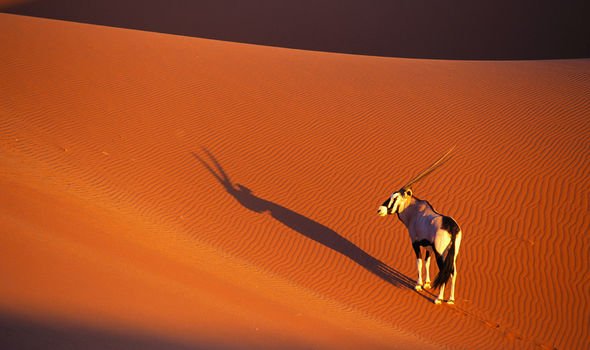 It felt like the end of the world and I was the only living thing for miles, save for a flock of ostriches.

They made the slight apprehension at my being well off the beaten track worth it, despite the bumpy ride.

Swakopmund is one of those places that doesn’t quite fit. In the late 1800s the Germans arrived, commandeered the land from the local Herero people, set up railways and built a staunchly Germanic city.

In 1915, following an uprising, they were forced to flee, yet today it still feels distinctly German.

The language is widely spoken and cake shops selling strudel are plentiful. Its wide roads built to accommodate the previous tram network, the half-timbered buildings and Lutheran churches – even the street signs, Leutwein, and Windhoeker are remnants of another era.

In contrast, local Himba women from their tribe in Namibia’s north west, are an arresting sight with their red-ochre skin, hair covered in thick wax, and clusters of jewellery covering their bare chests.

They sit on the ground of the local crafts market selling hand-beaded necklaces. 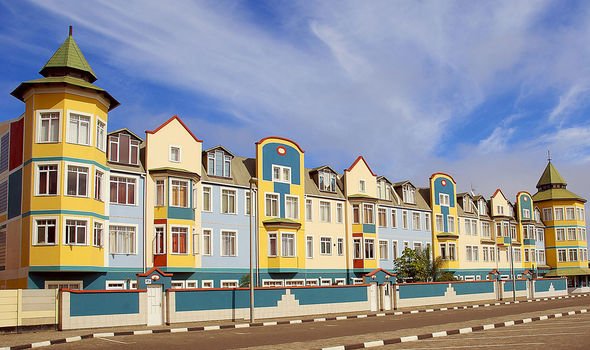 The seafront is lined with palm trees and bordered by a smart lawn. The jetty, built in 1905, is home to two restaurants serving fabulous seafood. I dined by a window at Pier 1905 on fresh oysters and grilled sardines with the wild Atlantic crashing all around me.

This coastline is also home to vast seal colonies whose numbers exceed 2.6 million; surpassing the human population by almost half a million.

I joined a tour with Pelican Point Kayaking based in nearby Walvis Bay. As our Land Rover cruised the windbeaten mile strip of sand towards Pelican Point, marauding seagulls swooped and stalked the wayward, defenceless baby seals. An unsettling reminder of just how cruel nature can be.

A prettier distraction were the elegant greater and lesser flamingos, just offshore perched on their bright pink pins and marching in perfect unison, seemingly oblivious to the carnage beyond.

Adrian launched our kayaks as we donned wading suits. As we tried to dodge the inquisitive seals, they leapt up and circled us excitedly before diving beneath our light vessels.

It was quite a surreal encounter accompanied as it was by a backing track of shrieking and grunting from the beach.

And to really appreciate just how vast this country is, I took a light aircraft flight up over the Skeleton Coast to the bulbous Spitzkoppen granite monoliths. 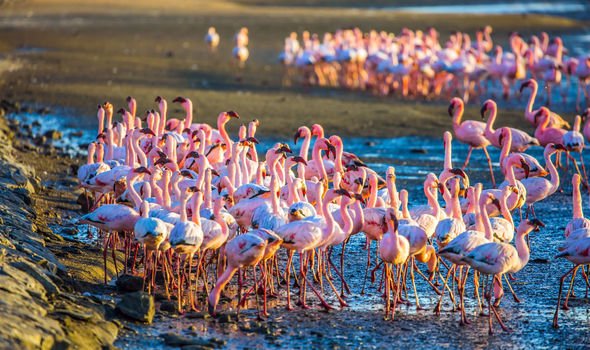 We swooped down over the thronging Cape Cross seal colony – where thousands crammed on to a small beach – and over sparsely populated towns with no more than a smattering of shanty houses.

I spent my last night at the GocheGanas Nature Reserve just outside Windhoek. It was a chance to kick back on a “mini safari” in the private reserve, home to white rhino, eland, oryx and springbok.

My stylish chalet was just what was needed after a hard week on the road, complete with a sunken bath and verandah, revealing the vast mountain range beyond.

A complete contrast to the tough terrain I’d spent the last week in which did, at times, appear lifeless and unrelenting.

However, when you dig beneath you can discover riches you never could have imagined – riches that will change your life for ever.