I visited Postojna Cave in another life. It was mid-March – the last days before Europe went into lockdown. I went to Slovenia’s most famous cave system to witness something that might now, in the shadow of pandemic and imploding economies, seem frivolous: a sneak peek at what was to be the first public display of recently hatched olms: blind, worm-like amphibians that are one of nature’s most remarkable underground creatures. But barely had the young olms settled into their new vivarium than Postojna Cave closed to visitors for the longest time in its 200-year history.

Postojna’s 24km cave system – 50km south of the capital Ljubljana, and just a 40-minute drive from Trieste in Italy – is one of Europe’s most-visited subterranean attractions. In pre-Covid-19 years nearly a million tourists took the red-and-yellow train through its caverns into a floodlit, cathedral-size chamber – and Postojna’s most-photographed rock formation, the five-metre-tall “Brilliant” stalagmite. They would file past a tank of adult olms, with its dim red lighting to protect their photosensitive skinsand visit the world’s only underground post office, complete with its own stamp and postmark. 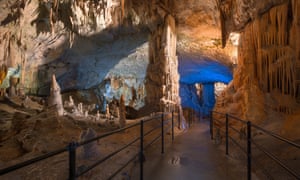 Slovenia has fared better than many of its European neighbours through the Covid-19 crisis – with 1,473 cases and 109 deaths to date. Bars and restaurants reopened on 5 May and on Wednesday the lights will go up again in Postojna Cave. Public health measures include 1.5-metre social distancing, mandatory masks, the sanitising of equipment in between tours, and a limit of 60 people per train (instead of the usual 116). On Monday 8 June, the young olms, or, as everyone in the cave calls them, the “baby dragons”, will at last go on display.

If olms are dragons, Primož Gnezda, a blond biologist with a beatific smile and complexion untroubled by the sun of the over-world, is their handler. As Postojna’s resident biologist, he spends his days in the cave, observing creatures that remain stubbornly mysterious, even to scientists who dedicate careers to their study. 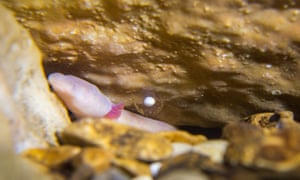 Local legend had it that the olm (also known as the proteus or human fish) was the offspring of cave-dwelling dragons – it’s as good a way as any of explaining the strange, pink wrigglers that were washed out of the caves after heavy rain. The truth is hardly less extraordinary. Olms are neotenous, meaning they retain juvenile characteristics for all of their 100-year lifespans – they never lose the pink external gills that look like sea anemone tentacles. At 30cm long, adult olms are the world’s largest subterranean animals; these aquatic salamanders are also blind, sensing light and vibration through their skin and sensory pits on their heads. Their hearts beat just twice a minute, and they can go more than a decade without food.

A display of adult olms has been part of Postojna’s offering since the early 19th century (they are mentioned in a 1868 Baedeker Guide), but the creature considered by some to be Slovenia’s national animal had never bred in captivity in the country before (the French, to Slovenian chagrin, managed it in the 1950s). Nor had olms ever been seen breeding in the wild. So when, in 2017, a translucent spherical olm egg appeared on the glass of Postojna’s main vivarium, Gnezda and his colleagues couldn’t believe their luck. More eggs appeared. The nation held its breath for an agonising 120 days before 22 babies hatched in the underground laboratory. 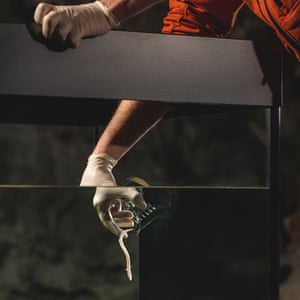 The babies have already yielded insights into olm behaviour. Researchers knew the animals could regrow lost limbs, but when one of the young tore off a sibling’s leg, they were able to study the regeneration process up close. Yet much about the amphibians remains mysterious. We have no idea how many olms live in the wild, nor even how many species there are, says Lilijana Mali, an amphibians expert at Ljubljana University. Her team think there are probably nine types, scattered throughout the Adriatic limestone karst. They do know, though, that the amphibians are sensitive to pollution as well as light, which makes Postojna’s breeding success all the more vital.

Like skiing for the Norwegians or surfing for Hawaiians, caving is a national pastime in Slovenia. The limestone bedrock of this country of 2 million people is peppered with more than 13,000 caves. To experience the realm of the wild olms, I pulled on overalls, helmet and wellies and left behind the vivarium and the tourist train. Caver and guide Roman Bogataj, who studies astrophysics in his spare time, was to be my guide, and I warned him that I suffer from mild claustrophobia. “Just think of it as a walk with nice scenery,” he said, with a stroke of his beard. 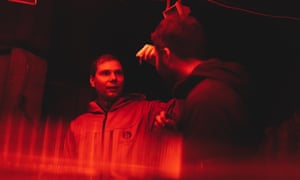 We followed an easy path along a thundering subterranean river, then turned off into a side chamber known as the Colourful Passage. Translucent curtain stalactites hung from the ceiling and the floor was adorned with cave pearls, glinting stalagmites and jumbled red rocks. Then Roman nonchalantly invited me to crawl through an oval opening in the rock face, a mere olm’s-length high. “I can fit, so for you it’s no problem,” he smiled, patting his modest belly.

I peered into the hole and felt darts of adrenalin shoot down my legs, but with Roman’s reassurance, and against every instinct, I found myself squirming into the crevice. The rock squeezed my chest from below and above, narrowing to a point where I had to angle my helmeted head to one side to fit through. I belly-wriggled and kicked until I was alone in a chamber that was the stillest place I’ve ever been.

Roman joined me and we clicked off our headtorches. For a few clockless minutes we experienced the world the baby dragons know: a place of silence and deep, smothering darkness, to which my thoughts have often turned in the long lockdown months since. When Roman switched on his torch I found myself like the olm, flinching from the light and in no hurry to return to the bright, chaotic world above.