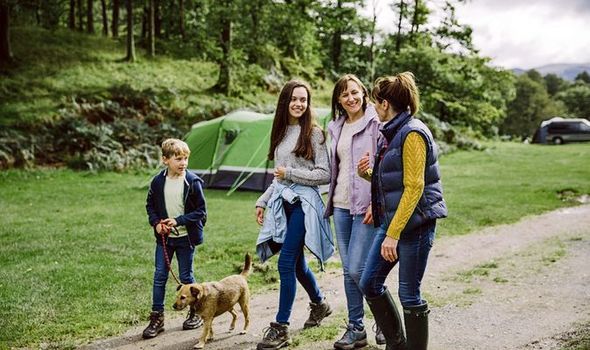 Nearly 40 percent said it was “imperative” that their four-legged friend join the fun at hotspots such as Cornwall or Lake District. The figures from Co-op Insurance – which offer further proof that Britain continues to be a nation of animal lovers – means that up to 4.8 million pooches could be setting off to popular destinations this year.

Charles Offord, managing director of Co-op Insurance, said: “Many people have welcomed a dog into their home over the past year and it’s understandable they want their four-legged family members to share in the holiday fun.”

But he warned that pet thieves were on the prowl everywhere – including tourist destinations.

He said: “We’d remind owners to be on their guard – both owners and their dogs will be in unfamiliar surroundings so they must remain alert if enjoying a drink on the beach or in a beer garden. Dog thieves can be opportunistic and a dog who looks lost is perfect prey.”

Thousands of people have got a pet during the pandemic as they spent more time at home or tried to combat loneliness.

But Mr Offord warned that people risk breaching the Highway Code if they drive with an unrestrained pet in the car which may distract the driver.

In the event of an accident, it could actually negate insurance cover as well as result in a maximum fine of £5,000.

He said: “Many owners don’t realise they’re risking big penalties if they let their dog travel unrestrained. Not only is it against the law but it could invalidate their insurance, costing them more money if they’re involved in an accident.”