Staying somewhere specifically designed to encourage strangers to socialise may not be top of everyone’s post-lockdown travel wishlists, but England’s hostels are hoping that outdoor enthusiasts and younger travellers will be quick to return – even if much of the communal fun is missing.

“For the first time in our 90-year history, we are encouraging people not to be social,” said James Blake, CEO of the England and Wales Youth Hostel Association (YHA). But Blake is confident that the essence of the organisation remains: “affordable places to stay to connect with people, the outdoors and heritage” – and that it will have strong appeal after three months of lockdown.

“People are going to be desperate for social interaction and the outdoors – climbing mountains, going to the coast, seeing heritage in cities. I’m not worried about there being a lack of demand. The issue is, during this period, until there is a vaccine or social distancing ends, we will be constrained in what we can offer.”

The YHA turns 90 this year, and although coronavirus poses its biggest challenge, it has survived several crises before. The foot-and-mouth outbreak of 2001 led to the closure of all rural properties for the entire summer, as access to the countryside was blocked; and during the second world war, many properties were requisitioned for troop training and field hospitals. 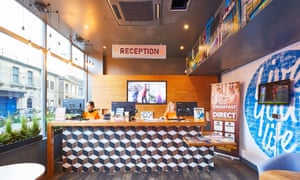 A phased reopening of the YHA’s 150 properties in England and Wales from 17 July includes 30 hostels with private rooms, many en suites (from £29 a night) and a further 63 sites for private hire (from £99), plus camping pods and cabins (from £39), but no campsites yet. Dorms will be used for family bookings only.

This cautious model, as Blake describes it, is unlikely to offer restaurant service or communal kitchens, but may include tea points and takeaways. Areas such as lounges, laundry rooms and locker rooms will remain closed.

“What we are fundamentally about will be so valued and valuable to people,” Blake said. “People are natural travellers. They like exploring and adventure. As soon as it’s safe to do so, people will come back – that’s been our experience in past crises, through foot and mouth and international terrorism. Things like that look really disruptive but people return, and we’ve always come through stronger.”

It’s an optimism shared across the industry. Lior Slepkov, founder of Hostel.consulting, believes the sector’s reliance on young travellers will help its speedy recovery. “In the past hostels have proven to be among the first accommodation models to recover from a crisis because of the clientele they cater to: young backpackers and digital nomads who are most likely to be single, without children and less averse to travelling in times of crisis.”

However, Slepkov’s concern is that many hostels, particularly those in cities, rely on international travellers, who are still restricted by closed borders or quarantine measures. This is exacerbated by travellers’ concerns about the UK’s still relatively high Covid-19 death rate. On the upside, said Slepkov, “UK travellers are generally more open to the concept of hostelling in their own country” than many other Europeans. 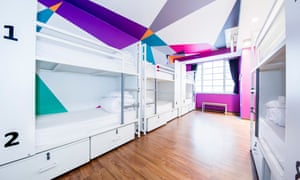 Alastair Thomann, CEO of Generator Hostels, said booking enquiries for its UK hostel in Kings Cross London, which reopens on 4 July, are up 400% on this time last week following Boris Johnson’s announcement of lockdown easing. “Many of our guests – the transient hostel travellers – are very last minute, but there is a pent-up demand to travel, especially domestically this year.”

Elsewhere, other UK hostels are attempting to navigate the new normal. Safestay’s hostels in London and Edinburgh will open from 17 July with safety measures including contact-free check-in; screens in reception areas; packs with masks, hand sanitiser and gloves handed out on arrival; new cleaning protocols and dorms restricted to the same group of travellers.

PubLove plans to open its six London hostels and the attached pubs gradually from 22 July, with reduced occupancy in dorms and contactless check-in and payments. St Christopher’s Inns is due to open its London Bridge and Newquay hostels on 4 July, initially replacing big parties with “safer events such as live music and quiz nights”, utilising outdoor space.

Hostelling Scotland, a network of 60 hostels across the country, is yet to announce an opening date but its website says anyone with a reservation up to to 31 July can rebook up to one year from the original arrival date or cancel for no charge.

Though it might seem like a challenge to keep the social element of hostelling, it just requires a new way of thinking, said Slepkov: “A temporary shift towards outdoor activities could be a good way to get people together without increasing the risk of infection. I have seen great success from hostels offering daily walks, jogs and bicycle tours pre-Covid. But the idea of playing Twister in the common room as an icebreaker is most definitely out of the question for now!”