When Italy shuttered for the lockdown, the obscure village of Campli, in the central region of Abruzzo, got to work. Its mission was simple: to put itself on tourists’ maps. It is not short of attractions, with churches frescoed by students of Giotto and Raphael, acres of lush woodland and Abruzzo’s oldest Sagra della Porchetta, a traditional festival in which locals feast on succulent, slow-cooked pork. And when Italy reopened regional borders on 3 June, Campli was ready to cash in. “BorGO!”, a new package of initiatives, runs on Saturday evenings through June: the pedestrianised historic centre will be given over to restaurateurs; the cathedral and Santa Scala shrine will stay open until 11pm, and there will be free guided tours of landmarks such as the Palazzo Farnese, also until 11pm.

A similar story is unfolding up and down the country. Last month, Monteverde, a hilltop village of 770 people in Campania, revealed plans to attract longer-term visitors with a package including lodging in a brand-new hostel and free co-working facilities. Montefalco, an Umbrian town known for dense, full-bodies sagrantino wines, kicked off the tourist season with a village-wide alfresco lunch on 2 June. 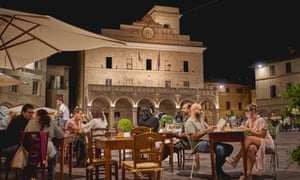 An anticipated boom in domestic holidays this year has galvanised Italy’s borghi (villages). While the block on international travel has ravaged tourism – the industry, which usually generates 13% of Italy’s GDP, could take a hit of €20bn this summer from reduced foreign visits alone – the government has asked locals to plug the gap. Half of a €4bn tourism rescue package announced last month will fund a tax credit of up to €500 for Italian families who holiday domestically. “Take your vacations in Italy,” imploredprime minister Giuseppe Conte in parliament. “We will discover the beauties we do not yet know.”

But social distancing measures mean crowding into traditional hotspots is not allowed. Medieval hill villages – remote, uncrowded and rural – have emerged as a handy solution. And the message is getting through. Holiday lets in Emilia-Romagna’s mountain villages are booking up fast. Requests for rental campervans are through the roof.

Many of Italy’s hill villages are difficult to reach and blighted by both inadequate infrastructure investment and chronic depopulation. Two hundred of the most beautiful villages do not have a shop or bar, according to Marco Bussone, president of the Uncem mountain communities association. Others have been razed by deadly earthquakes, not least the one in central Italy in 2016. Stefano Boeri, the architect of the Bosco Verticale, Milan’s iconic eco-friendly skyscraper, estimates that almost half of Italy’s 5,800 small villages – with populations under 5,000 – have been virtually abandoned. 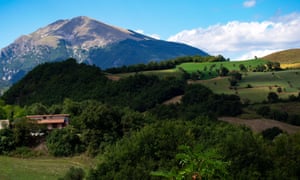 “We’re really in the inferno,” says Federico Agostinelli, mayor of Campli. “Birth rates are down all over Italy, but ours are especially low. The earthquake [of 2016] didn’t help us, either. But our turning point came five years ago, when we decided to invest in tourism. Between 2018 and 2019, visits to Campli rose by 140%.”

While efforts to revitalise villages have been under way for several years, the idea gained national traction in April, when Boeri spearheaded calls to tempt residents out of polluted cities, partly through tax incentives. “The lockdowns have helped us appreciate the importance of green spaces, and we understand we are no longer dependent on inner-city offices for our work,” says Boeri. If cities like Venice and Florence are haemorrhaging residents, the villages could promote what he calls “turismo di prossimità” (proximity tourism). “[The villages] will allow for a slower form of tourism… Personally, I want to visit places where I can interact with the locals, immerse myself in their heritage and see the farms that produce the food that arrives on my plate,” he says.

The government reacted quickly: last month, it earmarked €30m to revitalise historic centres and develop tourism initiatives in villages in five southern regions, as well as €42m of funds linked to the legge piccoli borghi – a €160m village development programme to enhance the villages’ governance and business potential. “Our strategy is to reverse depopulation, attract investment, harness culture and attract entrepreneurs,” says Anna Laura Orrico, a junior culture and tourism minister. “We know positive steps made in the villages will spread through the entire country.” 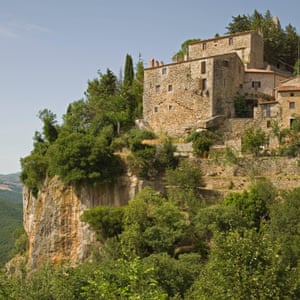 But cumbersome bureaucracy will limit state investment this summer. The €30m may not actually be paid out until September, a tourism ministry spokesman confirms.

The villages have pushed on, often with regional support. Puglia has lauded its “Magnificent 11” most beautiful villages, from higgledy-piggledy Pietramontecorvino to picture-postcard Roseto Valfortore. Sicily’s Committee for the Promotion of Tourism, established in 2018, has launched a series of village tours, starting at the end of May with Castroreale, voted Italy’s second most beautiful village in 2018. Last month, Tuscany accelerated the Valdarno Bike Road project: 150 new signs will indicate 240km of bikeable paths connecting villages, while cultural treasures will be highlighted with a new app.

Once Italians have discovered their forgotten villages, international visitors could follow in droves.