Empty mini bars, buffet-free breakfasts and regular deep cleaning are among the measures being introduced by one of the biggest hotel operators in England as it prepares to reopen at the start of July.

Accor, which owns hotel brands including Novotel, Mercure, Ibis and Sofitel, runs 270 hotels in the UK, and is planning a staggered reopening of its properties beginning with some locations in England at the start of July. On Tuesday Boris Johnson will announce plans for pubs, restaurants and hotels to resume business in England from 4 July. Accor’s 182-room Novotel at London Bridge will be one of the first to open, with now-familiar changes including hand sanitiser stations, floor markers and perspex screens at check-in.

Almost all paperwork has been removed from the rooms, along with the telephone, while the plastic pouch containing tea and coffee sachets will be quarantined for 72 hours between guests.

Occupied rooms will be spaced out along a corridor, and rooms will be left empty for 24 hours between bookings, a task made easier by lower occupancy levels.

Accor’s bars and restaurants will not reopen initially. Instead visitors can order room service or “grab and go” meals which they can collect and eat in their rooms or spaced out in communal areas.

Accor hopes to have re-opened around three-quarters of its mid-range UK hotels by September, although its high-end properties such as the Savoy in central London and airport hotels will be slower to open their doors.

“People will need some time to trust and be reassured,” said Thomas Dubaere, Accor’s chief operating officer for northern Europe. “People still have a worry about crowds, and big hotels say many people”. 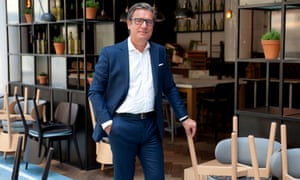 In a bid to reassure guests, Accor is introducing an “all safe” label, under which the health and safety measures in each of its 3,700 global hotels will be audited and accredited by an independent body.

Domestic demand is slowly returning at Accor hotels which have already reopened in countries including Belgium and Germany, even if it is not expected to return to pre-Covid levels for some time.

The French-owned group hopes to catch some of the peak summer season, although Dubaere said consumers are searching more frequently on Google for private rented accommodation than for hotels. “The first hurdle is to reassure people, that you are safe in your room, that you are safe when you are in the hotel”.

“People will want to reconnect with friends, family, they will want to visit places,” he added. “The leisure or tourism segment is the first one which is going to come back, hence why it is crucial that we can start opening before the summer”.

The hotel sector only expects just over a third (38%) of trade to return by December, compared with the same month in 2019, according to a survey by the trade body UK Hospitality, even with one-metre distancing allowed inside hotels.

A bigger concern for hotels and the wider tourism sector are the government’s quarantine restrictions, Dubaere said, under which visitors to the UK are required to self-isolate for two weeks.

Accor expects domestic visitors to return first to its UK hotels, but Dubaere added that quarantine is “an extra hurdle we could do without, because international business will be impacted, there will be people who will avoid coming to the UK”.

That view is echoed by Kate Nicholls, chief executive of UK Hospitality: “It doesn’t just affect the bookings in the period in which quarantine applies. If it is ended in July or August it will knock on and have an impact on demand from international tourists right until the end of the year”.