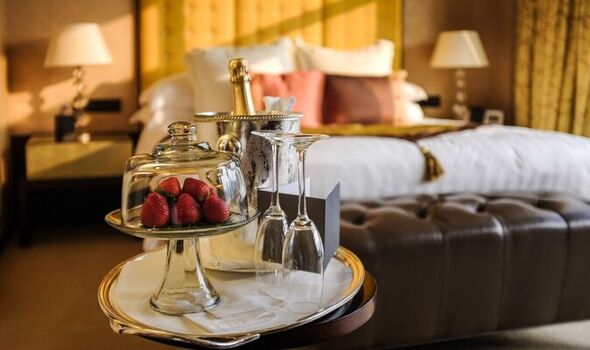 Other important factors for a love-in weekend also include a big bath, a large bed – and soundproofed walls.

But chivalrous men feel it’s down to them to book the trip, rather than leave it to their female partners.

And half of the women polled agreed the cost of Valentine’s Day should be shared between a couple – while only 36 percent of men agree.

Nearly double the number of men in heterosexual relationships believe it is up to them to decide where to go on the trip (23 percent) than women (12 percent).

But 58 percent of men see February 14 as a day to treat their significant other like a king or queen, while only 49 percent of women agree with the sentiment.

The study, commissioned by hoo, an innovative hotel booking site which encourages Brits to make an online offer for a better deal on hotel rooms, also found three times as many men (14 percent) as women (four percent) said the best part of being away for a romantic break is sex in a different location.

Other important aspects included the opportunity for no sound limits on making noise in the bedroom, as well as a weekend of no housework.

Meanwhile, as a renowned nation of dog lovers, nearly a quarter (23 percent) would bring their pet pooch along on a romantic break with their partner.

Nearly a third (29 percent) would be willing to splash out between £251-£500 on the perfect Valentine’s Day trip, and 42 percent consider two nights to be the perfect length of time to spend away with their loved one.

It also emerged romantic Brits would only wait a year into a relationship before going all-out for Valentine’s Day, with more than a fifth (22 percent) believing that’s the right time for a no-expense-spared trip.

A third feel it’s embarrassing to barter for better value when booking a romantic hotel break.

But 28 percent would expect a hotel they’re staying at for Valentine’s Day to gift a free bottle of champagne.

Adrian Murdock, Co-Founder of hoo, said: “It’s heartening to hear British men understand the importance of treating their partner to a romantic trip away – even if they want to bring their dog along too.

“There are masses of amazing deals out there, and bartering for a dream break is far easier than shy Brits realise.

“Especially when there’s a much longed-for weekend away from the housework on the cards. Even better if it’s a room with soundproofed walls.”

The Lake District came in at number three (12 percent) beating the likes of Tahiti, Rio de Janeiro, and Kyoto.

But a UK-based trip is overwhelmingly on the cards this year, with only 18 percent planning a break overseas.

Brits also revealed their worst Valentine’s weekend experiences with a partner – which included hotel staff barging into the bedroom during a romantic moment, and getting dumped.

Others told of their partner getting punched by a man at the next table in the hotel restaurant who thought he was looking down his girlfriend’s cleavage, and arguments with their other half.