American Airlines would take minority ownership in Chilean budget carrier JetSmart under a letter of intent announced by the carriers.

The partnership would include a codeshare arrangement and enable AAdvantage members to earn and redeem loyalty points on JetSmart flights. 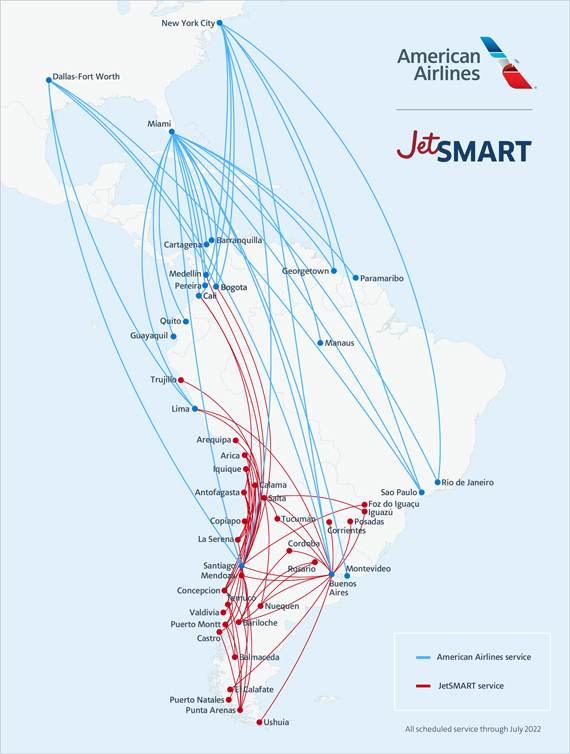 American has not revealed how much it intends to invest in JetSmart, nor did the carriers unveil details about the proposed codeshare. But the tie-up would give American customers access to at least part of JetSmart’s network of 33 destinations in South America, which is primarily focused on Chile and Argentina.

American flies to 17 South American destinations from its hubs in Miami, Dallas and New York. Plus, the carrier maintains a codeshare agreement with Brazilian carrier Gol.

The partnership would be unusual in the airline industry, marrying a full-service carrier to an ultralow-cost carrier.

But it gives American the opportunity to fortify its presence in South America following the carrier’s loss of LATAM as a joint-venture partner in 2019. LATAM and Delta are now vying for approval for their own joint venture, though LATAM continues to work through a bankruptcy reorganization that began early in the pandemic.

American’s first major response to the Delta-LATAM move was to partner with Gol and its Brazil-centric network in early 2020.

“Gol remains a valued partner, and its network is highly complementary to ours and JetSmart’s,” American spokeswoman Martha Thomas said. “Our intention is to continue strengthening our relationship with Gol so we can work with our partners to build the most extensive network in the Americas.”

American’s planned tie-up with JetSmart is also in keeping with its shift during the pandemic toward an increasing reliance on partnerships. Early this year, American launched a robust partnership with JetBlue out of New York and Boston. American has also enhanced its partnership with Alaska Airlines.

Launched in 2016, JetSmart is one of several discount airlines in which Indigo Partners is a primary investor. Others include Frontier, Mexico’s Volaris, Hungary’s Wizz Air and the Phillipines’ Cebu Pacific.