This summer’s spikes in airline cancellations and delays are drawing scrutiny to the way carriers have managed staffing levels during the pandemic.

In recent letters, Sen. Maria Cantwell, D-Wash., the chair of the Senate transportation committee, requested that American, Allegiant, Delta, JetBlue, Southwest and regional carrier Republic Airways provide written information by the end of the month about any staffing shortages they have.

Collectively, appropriations for U.S. carriers and the contracting companies they use for ground workers have totaled $58 billion in federal payroll support over the course of the pandemic, a fact that has not escaped Cantwell’s attention.

“Congress issued this funding with the express purpose of keeping the workforce on payroll to ensure an easier ramp-up when air travel returned,” she wrote in the July 16 letters.

Cantwell added that she is concerned that, at best, the airlines have poorly managed their staffing resources and operational ramp-up and at worst have “failed to meet the intent of taxpayer funding and prepare for the surge that we are witnessing now.”

Airlines continued to have high levels of flight delays and cancellations in the first half of July, following similar operational challenges in June.

Southwest and American each canceled approximately 3% of their flights between July 1 and July 16, the highest among mainline carriers, according to data provided by FlightAware (see chart). Regarding departure delays, JetBlue had the highest percentage at 42%, followed by Southwest and Allegiant at 39%. 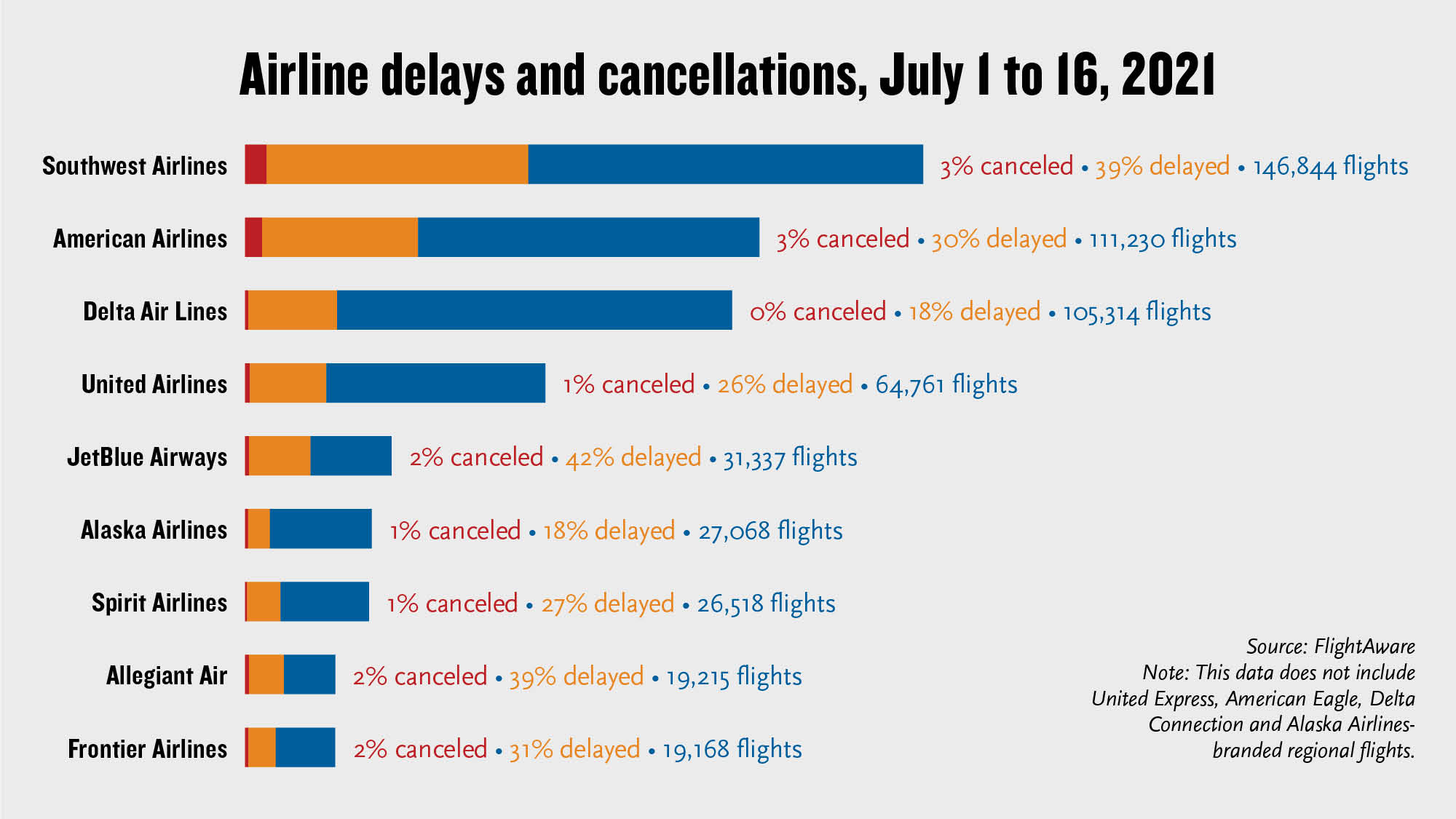 The FlightAware data for American and the other network carriers doesn’t include regional flights operated by partner airlines, such as Sky West and Republic.

In response to emailed questions about the Cantwell letter and operational concerns in general, some airlines said that they are addressing staffing challenges, while others said that they don’t have staffing shortages.

Southwest, for example, faulted widespread thunderstorms, infrastructure challenges and “unrelated challenges with technology” for its subpar June operational performance. The carrier contends it that it is flying only the schedule it is staffed for.

Allegiant did acknowledge that staffing issues are contributing to its recent low on-time performance, but the carrier said those problems are with its partner ground service contractors, rather than with the airline itself.

Other carriers have acknowledged their own staffing shortfalls. For example, in mid-June American announced it would reduce its schedule through the middle of this month due to staffing problems caused by the quick ramp-up of passenger demand. Last week, American canceled extended leaves for approximately 3,300 flight attendants, requiring them to the return to work before the holiday season.

Delta, too, is addressing staff shortfalls. The carrier expects to make 4,000 to 5,000 hires and also plans to hire more than 1,000 pilots before next summer.

Despite being one of the carriers targeted by Cantwell, Delta delayed just 18% of its flights during the first half of this month and canceled less than half of 1%, according to FlightAware.

JetBlue and Republic, the two other carriers that Cantwell wrote to, chose not to comment. Republic canceled 3% of its operations during the first half of this month, while JetBlue was the industry laggard in departure delays.

Airline industry analyst Bob Mann of R.W. Mann & Co. said that airline management teams, most obviously at American and Southwest, were clearly caught off-guard by how quickly demand returned in the spring and summer.
Airlines then had to decide whether to participate in serving that demand or, alternatively, lose share.

“So it is rational to participate in flying. But you can’t overschedule and underdeliver,” he said.

Management teams, Mann said, have faced complicated staffing challenges, including the time it takes to retrain pilots who had been on leave. But he said that airlines can’t just wash their hands of responsibility for staffing shortages at the contracting companies they select and oversee.

Still, Mann said airlines deserved the hefty federal payroll support they have received during the pandemic and credited those funds with preventing any closures among mainline U.S. carriers.