Thanet’s sandy beaches pull in plenty of visitors on warm, sunny days, but most head for Margate’s cafe-rich stretch or Broadstairs’ amenities-aplenty Joss Bay and Botany Bay. Kingsgate Bay (between the two) is a little less accessible – there is no car park and no toilets – and consequently much quieter. A short walk at low tide from Botany Bay through a chalk seacliff arch is all it takes to shake off the crowds. There’s nothing much to do on arrival except settle with a picnic, go for a swim in the shallow, sheltered sea, or peer into a rockpool. Which, of course, is plenty.
Where to stay In a bell tent with outdoor kitchen and shower, fire pit and compostable toilet at Quex Livery Glamping Holidays in Birchington. Sleeps two, Monday-Thursday £100 a night (£115 a night weekends). 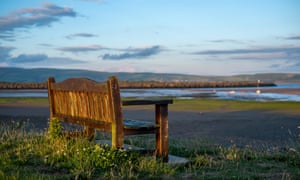 The Cumbrian coastline is often forgotten as visitors pile inland, into more-familiar Lake District destinations. This means that the Duddon estuary, with its 30-mile shoreline comprising sand, saltmarsh, dunes and mudflats, has plenty of room for roaming in solitude. The gently sloping shingle beach at Haverigg, at the mouth of the estuary, expands into a seemingly never-ending sandy stretch, fringed by dunes with views of distant Lake District fells. A walk along the old sea wall passes a lagoon – once an iron ore mine now Hodbarrow RSPB nature reserve – and a restored lighthouse.
Where to stay Cockleshell Cottage is on Haverigg harbour and the Cumbrian Way and has views of the estuary. Sleeps 4, from £665 a week. 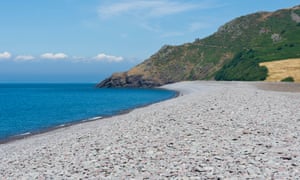 This huge shingle arc stretches between the Bristol Channel and the farmland and hills of Exmoor and offers masses of mind-clearing space. Start your visit in the hamlet of Bossington, gawp at the pretty cob and thatched cottages, and leave the car at the National Trust car park (the beach is part of its Holnicote Estate). The beach is on the South West Coast Path and there are walks to the rocky promontory of Hurlston Point and around wildlife-rich Porlock Marsh, passing chunky concrete remains of second world war pillboxes on the way.
Where to stay Exmoor Owl and Hawk Centre in Allerford, near Minehead, has three rooms in its farmhouse. Doubles from £90 B&B, singles from £70. 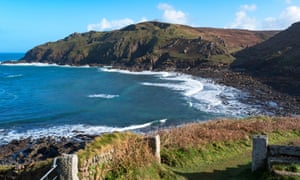 Leave the car at the National Trust car park at Cape Cornwall, and head off along the South West Coast Path to the less-visited Porthledden Cove at the end of Kenidjack valley. Brush past scented gorse and scrubby heather beside the stream that once powered 50 tin mining waterwheels, to the sheltered beach. There, find masonry relics of Cornwall’s industrial past slumbering beside sculptural, multicoloured boulders and a small shingle beach. An abundance of rock pools, hollowed from chunks of granite by the sea, is revealed at low tide.
Where to stay Boslow Cottage in St Just has sea views from the garden. Sleeps 6. From £724 a week. Limited availability in July and September. The Commercial Inn is a comfortable hotel in the market square at St Just. Doubles from £89 B&B, plenty of availability – opening 6 July. 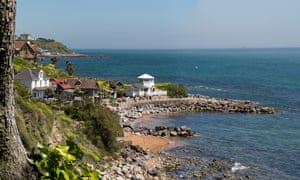 Although the beach fills up with sandcastle-building families at peak periods, its lack of vehicular access means that Steephill Cove remains off the more obvious tourist trails. Approach it by parking in Ventnor’s Botanic Gardens, then wander past towering echium and tropical planting to the coastal path. A steep descent pitches you out onto the sandy beach where it’s all about beach huts, deckchair hire and pretty holiday cottages converted from a former lighthouse, a boat house and fishermen’s cottages. Some fishing boats still sail to catch lobster and crab served up in pasties from shoreside cafes.
Where to stay In a barn conversion at Bank End Farm near Ventnor, seven nights from £555 per week (sleeps 2) to £2,137 (sleeps 8), limited availability. Try cottages at Steephill Cove, various prices and room sizes, but booking up quickly. 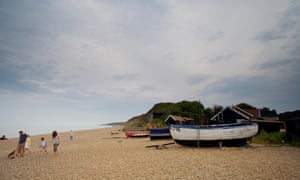 Along the coast from Southwold lies the sand-and-shingle beach at Dunwich. With Sizewell B nuclear power station constantly in view and mist rolling in frequently from the sea, it is moodier than its neighbour and attracts fewer visitors. Its history also has an air of melancholy – ramped up by tales of the drowned port of Dunwich, swept away by a storm surge in 1286. Crumbling cliffs speak of the still-constant threat of coastal erosion. The heath backing the beach is the place to see rare bird species, some of which have flown over from the neighbouring RSPB reserve at Minsmere.
Where to stay The Eels Foot Inn, Eastbridge, a pub with six rooms. Doubles from £110 B&B. 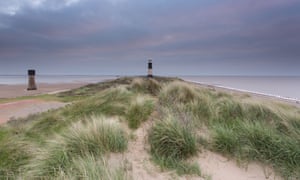 For an otherworldly, away-from-it-all day out, try this whip-thin tidal island stretching out into the North Sea. The three-mile walk to its extremity can be challenging when the wind rattles in across Humber estuary. Yet the trek over the shingle and sand to the lighthouse as the sea pounds on either side, is worth it – not just for a sense of achievement but for the chance to spot migratory birds and find a fossil or two. The Discovery Centre at the start is run by the Yorkshire Wildlife Trust, which manages Spurn.
Where to stay Driftwood Caravan Site in Kilnsea, at the base of Spurn Point, has an area for small tents. Caravans and campervans £15 including hook-up; tents £10-£15. 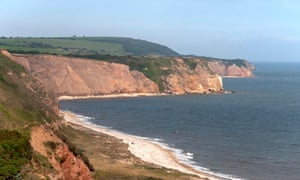 The Durham coast can sometimes get passed over in favour of beaches in North Yorkshire and Northumberland. There used to be a good reason: its beaches were black with coal-mining waste. When the mines closed, however, a regeneration scheme, together with the motion of the sea, cleaned up the coast. Now there are plenty of reasons to visit the peaceful, sandy beaches, wildlife-rich cliff tops and wildflower-sprinkled denes (valleys). These days the only evidence of Horden beach’s mining past is the multicoloured stones stained umber and yellow by iron oxide.
Where to stay No 16 offers boutique, room-only accommodation in Seaham, right at the start of the Durham Coastal Footpath. Two nights in a double is £140-£160. 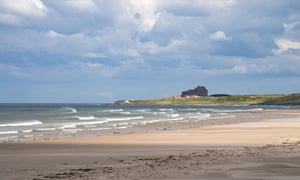 The vastness of this sandy beach, and the fact it can only be reached on foot, means it is blissfully unpopulated. Plenty of room to let a dog have a good run, stride out purposefully and gulp lungfuls of sea air. The 1.5-mile path to the shore goes through fields and past farm buildings until it reaches the massive dune system that fringes the beach. In front of you are miles of sand, the nippy North Sea, the possibility of seals lounging on sand banks and, on either side, the dramatic outlines of Bamburgh Castle and Holy Island.
Where to stay In a Wigwam (a wooden tent with mini-kitchen and fire pit) at Springhill Farm near Seahouses. Sleeps 4, £25pp pn, reopens 6 July. 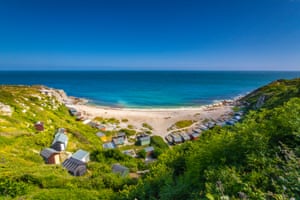 At the end of Chesil Beach, the tidal island of Portland is much less visited than the postcard-familiar sites along the Jurassic Coast. Church Ope Cove, on its eastern side, is one of the rocky outcrop’s few beaches. At the bottom of a long flight of concrete steps and tucked between three cliffs, is a sheltered, safe and secluded place to swim and snorkel. This is a shingle beach; debris from the quarrying of Portland Stone, now rounded into pebbles by the tide, has replaced the sand.
Where to stay The Old Boathouse has views over Portland Bill from a hot tub with sea views. Sleeps 4, £1,299 for week starting 18 July.

All the accommodation listed was available to book at the time of going to press; demand for July and August is currently very high

• Clare Gogerty is the author of The National Trust Book of the Coast and Beyond the Footpath: Mindful Adventures for Modern Pilgrims