Port Isaac has a medieval harbour, which once handled coal and pottery. Now, tourists come to walk the coastal path and visit the neighbouring harbour of Port Gaverne and its rock pools. Fisherman Calum Greenhalgh can often be seen hauling his catch up the hill in Port Isaac, and it is his fish shop and cafe, run with his wife Tracey, that Cornish chef Nathan Outlaw recommends: “He catches the crabs and lobsters in the bay and she cooks and serves them. They do the best crab sandwich (£9.75) in the world!”
• freshfromthesea.co.uk 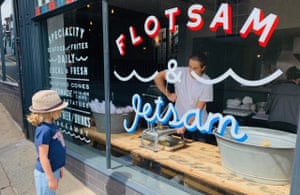 Less than 90 minutes by train from London St Pancras lies Broadstairs, with its fishermen’s cottages and retro ice-cream parlour, Morelli’s, complete with soda fountain and jukebox. Guardian food writer Felicity Cloake has found a new reason to visit: Flotsam and Jetsam, a pop-up from seafront restaurant Wyatt and Jones, which offers a “dizzying array of sauces” – such as squid ink hot sauce and oyster mayo – which are perfect squeezed on to a cone of frites (£3.50), as well as crispy crab dumplings (£6.50).
• On Facebook 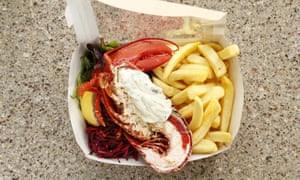 Going to the village and fishing port of Saint Monans is like a trip back in time, with its 14th-century foreshore church, 17th-century houses nudging the harbourside and salt pans from its industrial past. It’s also on the 117-mile Fife Coastal Path (linking the Firth of Forth with the Firth of Tay). Scott Smith, chef and co-owner of Edinburgh’s Fhior, suggests stopping for lunch: “Although it’s a smokehouse, I always go for the fresh lobster.” Half a lobster with tarragon mayonnaise is £14.50.
• eastpier.co.uk 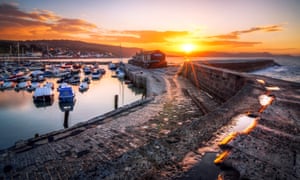 Fossil hunting on the beaches between Charmouth and Lyme Regis is a fun way to explore Dorset’s Jurassic Coast. Food writer and chef Gill Meller knows the region and this cafe is his top tip: “Famous for its vegan shakshuka, it opens early so you can have a coffee after a swim, sit outside and look out over the Cobb and the bay. It’s unpretentious, inexpensive and where you’ll find the fishermen.”
• 24 Marine Parade, no website 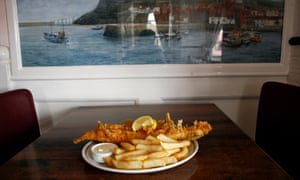 The Magpie was built in 1750 as a merchant’s house and overlooks Whitby harbour and is food writer Yasmin Khan’s favourite: “It’s an atmospheric place. It has the best fish and chips in the UK, with chips fried in beef dripping. It’s also where author Bram Stoker got inspiration for Dracula.” (In 1890, Stoker arrived at Mrs Veazey’s guesthouse in the town.) The huge menu includes cod and chips (£11.50) and Whitby wholetail scampi with chips (£12.50).
• magpiecafe.co.uk 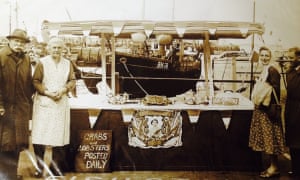 This Devon town is harbourside perfection on a sunny day. A wander to Churston Cove is a good way to start, as is a visit to Berry Head national nature reserve to see the breeding colonies of guillemots. Seafood ambassador and chef Mitch Tonks says there is no need to stray far for lunch. “Overlooking the bay, Shoals is part of a salt-water lido. Run by fish merchant Sean Perkes and his wife Sarah, it’s all about fresh local fish. The skate wing is fabulous.” The catch of the day, served with sides, is £13.95.
• shoalsbrixham.co.uk 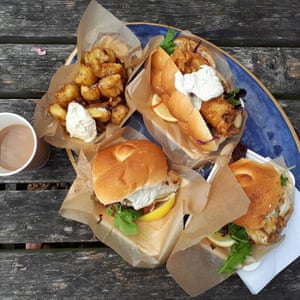 Think Dungeness, think shingle beaches, Derek Jarman’s garden and the looming nuclear power station on the headland. The local beer is good, too, so visit the tap room at Wantsum Brewery. Food writer Kate Young describes the Snack Shack as “a small shipping container featuring a kitchen, surrounded by a collection of weathered wooden picnic tables. I’ve thought about the fish baps (on soft rolls, with fresh salad, served with rough chunky chips) at least once a week since I visited.” It’s tiny, and tentatively open, so steer clear at weekends and peak hours to avoid overcrowding.
• dungenesssnackshack.net 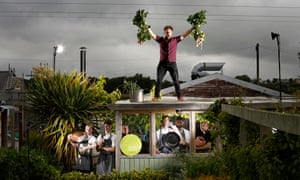 Anglesey is perfect for paddling, especially Church Bay with its cliff paths and rock pools, or for windsurfing at Trearddur Bay. Food writer and blogger Karen Burns-Booth suggests refuelling in the unlikely setting of a tin shed on a campsite. “The Marram Grass is a favourite. It started off serving campers and now does creative but unpretentious restaurant-quality dishes at the seaside.” Anglesey crab and lemon tatws rosti is £9, Menai mussels with tarragon basil £10.
• themarramgrass.com

Winkles at the Ferry, Felixstowe, Suffolk 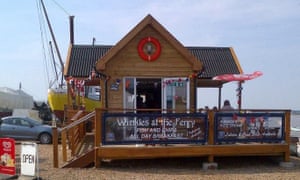 For Nicola Miller, food writer and columnist, a day well-spent at the Suffolk port town would be “an early lunch at Winkles At The Ferry (scampi and chips, £9.95) then a walk along the Deben to where it meets the sea. Follow the coastal path through to Felixstowe proper – with its sandy beaches, pier and arcade – then to Landguard Fort, near the Port of Felixstowe, which has a nature reserve, empty shingle-and-sand beaches and a wonderful view of the shipping channels.”
• On Facebook 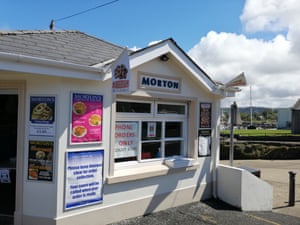 Ballycastle, with its seafront gardens, sandy beach and salt-weathered Pans Rocks, is a beauty: ferries also run to Rathlin Island for seal-spotting. Northern Irish food writer Diana Henry says: “My brothers (and me, when I’m in town) go to Morton’s in the harbour. I take a bottle of champagne to the beach to have with the fish and chips, and my own mayo or tartare sauce, too.” The cod supper is £8.10.
• On Facebook