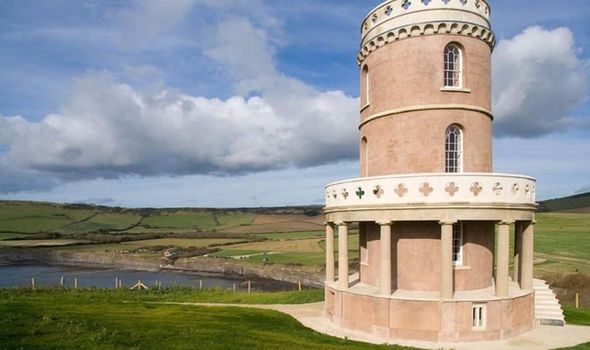 There are more than 200 properties, mostly in the UK, and they range from single-room restored Regency follies for two to a Scottish country house for 16. The booking page includes a useful FAQ about how accessible a property is, if it’s likely to be noisy, what parking is provided, what the kitchen and bathroom contains – and even if it has low headroom or awkward stairs due to the period features.

These are by no means traditional holiday cottages, and what might make a Landmark Trust escape the perfect way to relax after a year of relentless media updates is that none have a TV, radio or even Wifi.

And it might just allow for that St Valentine’s Day do-over to be held in a place you’ll never forget.

Here’s 11 of the more unusual:

No one is quite sure how this romantic hideaway for two got its name, but sitting above a wooded river ravine called the Dingle, its colannaded front does remind one of a bird cage hanging in a tree.

It was designed by James Wyatt for Isaac Hawkins Browne, a wealthy industrialist who returned from his Grand Tour with big ideas for his Shropshire estate.

The building remained in use until the 1930s, but became derelict when the main hall was demolished. The Birdhouse has now been restored into a two-floor retreat with a bedroom and kitchen on the lower level and a sitting room on the top level overlooking the pools and pathways of the Dingle, which you are welcome to explore, or simply sit and listen to the birdsong in the surrounding trees and relax.

High above Kimmeridge Bay on the South West Coastal Path stands a four-storey circular tower that was moved stone by stone from the cliff edge to a more stable piece of land.

Built in 1830, Clavell came close to falling into the sea by 2002 until the Landmark Trust rescued it and restored it into a charming four-room dwelling with spiral staircases leading up to a bedroom with a 360-degree panoramic balcony.

It’s a 10-minute walk from the car park, but worth it for the sense of remoteness that Clavell offers as you watch the ever-changing light over the waves.

The dairy at Cobham Hall is much grander than you may have expected for a milkmaid’s workplace.

The 18th century fashion of overly ornate estate buildings saw the dairy created to look like a chapel topped with a bell tower, and four corner pavilions with cloistered arcading between each.

The central chamber where butter was once churned is now a cosy sitting room despite its soaring double-height ceiling.

There is a woodburner to keep the chill at bay and the room is lit with stained glass on all sides. One of the arcades now houses a practical galley kitchen under its vaulted ceiling, while another has the narrow main bedroom with a roll-top bath.

A TV show is being made about the site, so it’s worth booking a weekend so you can boast you’ve stayed there.

Don’t let the name put you off – this Romanesque triple-domed banqueting house offers all the comforts of home but with one of the greatest views in Yorkshire.

Facing out across the Vale of Mowbray, The Ruin stands on a terrace above the restored Hackfall gardens, which offers wooded trails alongside a river with waterfalls, tumbledown follies, and benches overlooking breathtaking views.

There are three rooms, and they have kept their original Georgian design of not being interconnecting – so part of the adventure of staying at The Ruin is a moonlit flit across the terrace to get from the bedroom to the bathroom. But that same terrace allows you to eat outdoors in the sunshine with the river valley beneath.

A tiny building with a massive legend attached, you’ll be staying in a former chapel on top of an ancient spring where pilgrims have visited for centuries. St Winifred was a 7th century Welsh princess who had sworn to a life of chastity and was beheaded by an angry suitor.

She was then said to have been brought back to life by her uncle St Beuno. Miracles followed, and several places in Wales, including Holywell in Flintshire, are also attached to the legend, along with this secluded site reached along a public footpath.

There are three pools, with the innermost being the medieval well chamber above which the little timbered building for your stay was built in Reformation times.

It contains a single room which has a small kitchen annex, but the only bathroom is a 10m walk outside, which may test your faith in Mother Nature on the chillier nights!

Plan your next staycation, day out or dining experience

Love having your calendar chock full of social events?

It is packed full of the best places to visit, from top restaurants and cafes, to holiday home recommendations and breathtaking parks dotted all over the country.

You also can find insider tips on what to do, see and eat at popular staycation locations.

One person who stayed in the Music Room described it as a wedding cake inside and out, and you can understand why as soon as you see the white plastered Baroque interior dating from around 1730. It used to be part of a rich lawyer’s house, but now stands on its own in a pedestrianised square with the loggia beneath it turned into a shop.

The plasterwork alone in the bedroom took the Landmark Trust more than 6,000 hours to repair. It represents the Greek Muses including music, astronomy, tragedy, dancing and comedy, and has the god Apollo watching from over the fireplace.

There’s even a baby grand at the end of the bed in case you feel inspired to exercise your own creative juices. From the bathroom, you have a view of Lancaster Castle, and there is a small roof terrace from which to enjoy the cityscape.

An aptly named holiday stay, this medieval timber-framed building sits on the church green in the Suffolk market town of Clare. The house bears the date 1473 and is part of a heritage neighbourhood in this little-changed locale.

Part of its charm is the elaborate pargeting (raised plaster decoration) adorning the front. Inside you have a sitting room with a moulded timber ceiling and an elaborately carved oriel window. The house is next to the parish church and graveyard, so expect the clock to chime regularly.

Nearby is Clare Priory, founded in 1248 by Austin Friars, and The Cliftons, a building with 16th-century brick chimneys decorated with Tudor patterns and star tops.

This octagonal folly reached by a long woodland drive isn’t large, but it’s got quite a big surprise in the basement… There’s just one main room to sleep and relax in, with a small kitchen tucked in the back. But that room is truly special, decorated abundantly with swags of shells and plasterwork and hundreds of icicles hanging from the green domed ceiling.

There is a large dining table as well as comfortable chairs in front of an open fire – which could prove handy if you explore the basement, where an 18th century plunge pool sits. The medical benefits of a cold bath were heavily promoted in the era and no country house was without one.

Modern day guests are also allowed to swim, but because the pool is fed by a natural spring, the water level cannot be guaranteed and it’s going to be very cold.

Another tiny property, but it’s big on Tudor history and will put you right in the centre of a bustling Gloucestershire market town on the doorstep to the Cotswolds.

The gatehouse dates from around 1500 and stands next to magnificent Tewkesbury Abbey – both survived Henry VIII’s sacking of the monasteries after the townsfolk claimed it as their parish church.

The Gatehouse has only one room, but it has been equipped to make the most of the space. There’s a gallery at one end with a sleeping platform, and below that is nestled the kitchen and bathroom.

It does mean you’re sleeping directly under the moulded beams of the ceiling, but the central location and the car parking space that comes with the booking may make up for any banged heads.

This may not sound like a romantic getaway on paper, but don’t let the name put you off. It’s true that two pigs belonging to Squire Barry of Fyling Hall once lived in this example of Classical architecture, but the Landmark Trust have converted it into a comfortable dwelling for a coastal getaway.

Set back on the cliffs above popular beach town Robin Hood’s Bay, the view between the Ionic columns as you sit under the pedimented frontage is a true relaxer, while behind you the North Yorkshire Moors stretch back for miles.

It’s not the largest of buildings and may not be entirely draught-free, but it has plenty of charm – from the sliding window covers in the bedroom to the wall of shutters in the sitting room. There’s even a piggy-shaped footstool to remind you of the previous occupants.

There’s a fair bit of mystery around the original purpose for this building – it’s a grandstand of some sort, but what the field in front was used for is uncertain. Landmark Trust thinks it was probably for lawn bowls, as we know it today, beloved of Sir Francis Drake in the late 16th century.

There is evidence of payment in 1632 for a ‘bowle alley house’ on the grounds of the now demolished Swarkestone Hall. The pavilion was a shell for many years – in its dilapidated state it featured on a promotional poster for the Rolling Stones’ Beggars Banquet album – until the trust reroofed it and restored the floors and windows to create a single room with a separate kitchen.

The only bathroom is up the stairs and across the roof terrace, offering you a starlit flit when nature calls.