Branching out: Artist creates incredible underwater ‘forest’ 200m off the coast of Ayia Napa using over 90 sculptures that divers and snorkellers can explore

Artist Jason deCaires Taylor has made a big splash in the art world once more – this time with an underwater forest off the coast of party hotspot Ayia Napa in Cyprus.

The Briton is known for creating underwater museums that feature striking sculpture collections. He’s created aquatic sculpture gardens everywhere from Cannes, Mexico, Grenada, the Bahamas, Lanzarote, Norway, Australia, and the Maldives – though this one was partially destroyed after it was deemed offensive.

Titled Museum of Underwater Sculpture Ayia Napa (Musan), his latest submerged endeavour is 200 metres (656ft) off the coast of Pernera Beach and features 93 sculptures on the seabed between eight and 10 metres (26 to 33ft) below the surface. 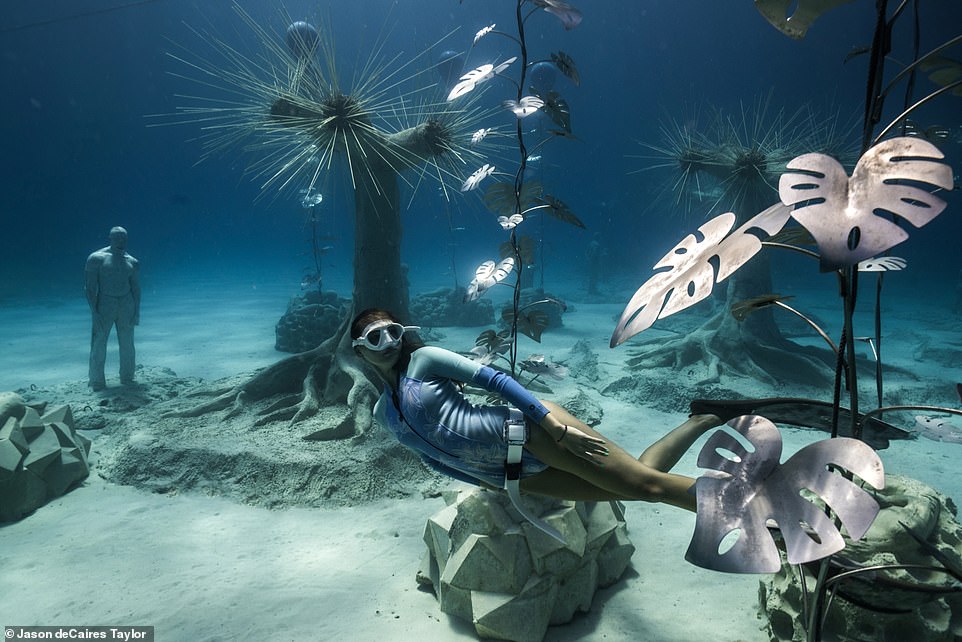 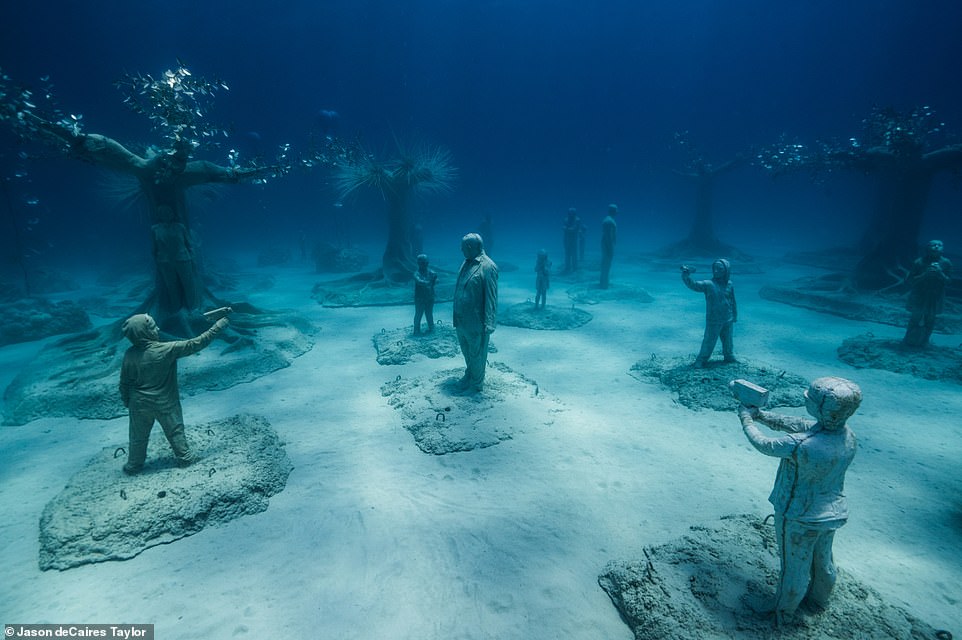 The artworks, lowered into the sea using a crane, allude to the relationship between man and nature, with life-size sculptures of children pointing cameras and playing amid 13-tonne blue-tinged trees

The exhibition, made with a budget of £846,685 (€1million), opened last month, with divers and snorkelers invited to explore what lies beneath.

The artworks, lowered into the sea using a crane, allude to the relationship between man and nature, with life-size sculptures of children pointing cameras and playing amid 13-tonne blue-tinged trees that catch the light as swimmers paddle overhead.

Made in conjunction with the government of Cyprus, the artworks are intended to resemble a path through the forest floor. 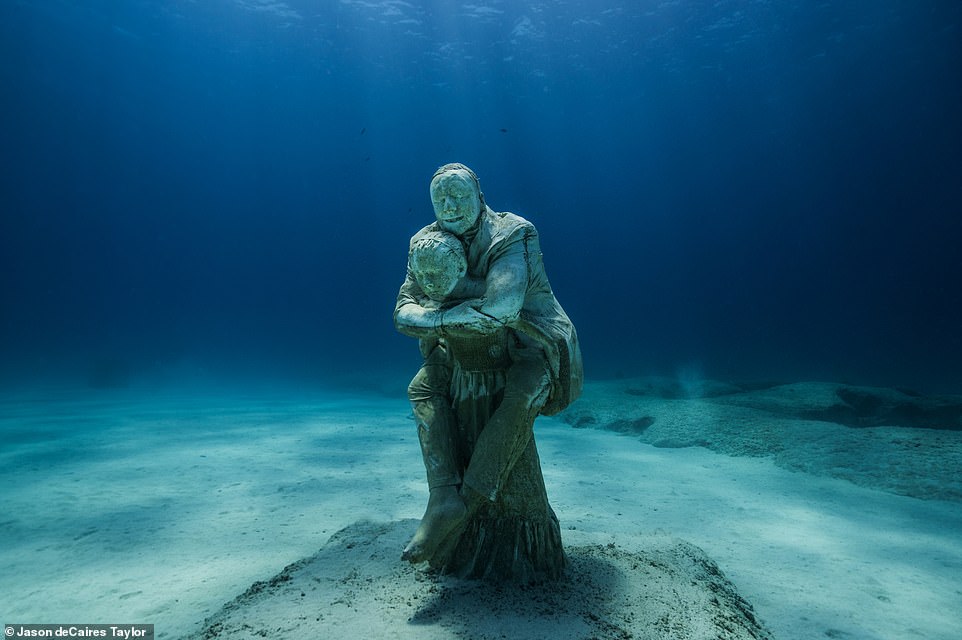 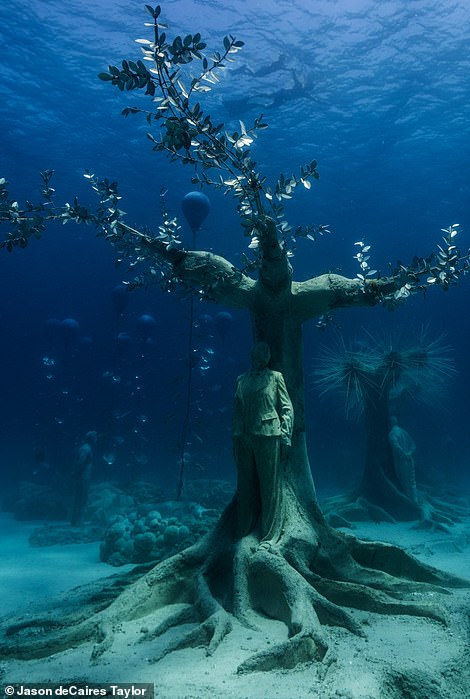 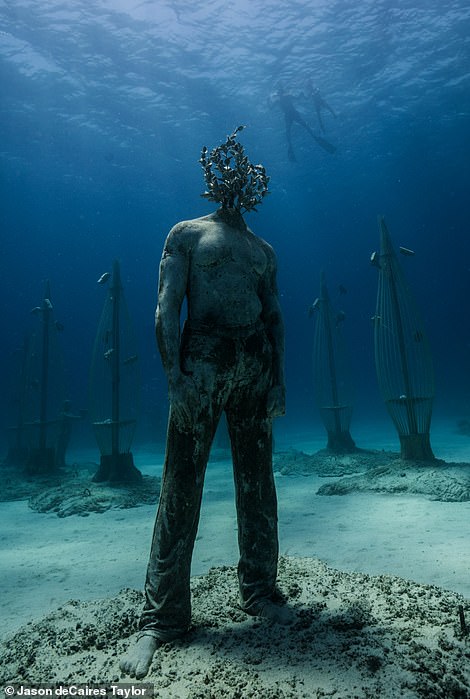 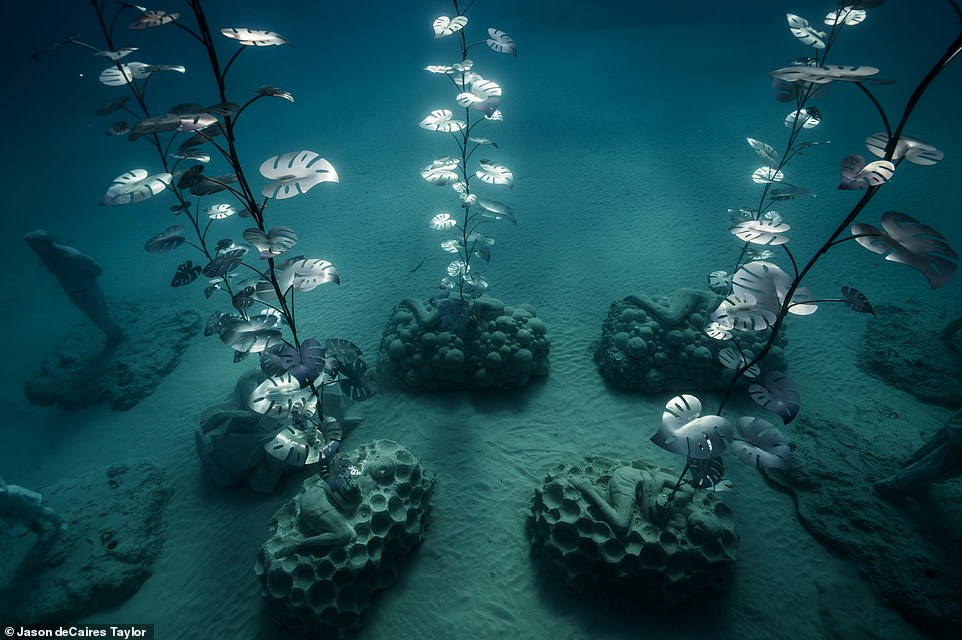 Ayia Napa’s Mayor, Christos Zannettou, said: ‘We believe that with this unique diving museum visitors will be able to enjoy an underwater oasis’

And it’s hoped that the materials will be a haven for sea life.

A launch statement said: ‘The sculptures have been designed and made with materials that attract marine life, and are placed at different depths, thus creating a suitable substrate for marine life at all levels.

‘The sculptures are made of inert materials, with neutral pH, so as not to affect the area adversely. It’s a sandy area and it is expected that over time the biodiversity of the area will be enriched, thanks to the museum.’

The artist describes the sculptures as ‘active catalysts’ in nurturing aquatic life and reefs, meaning Musan will become an evolving and growing underwater forest.

Ayia Napa’s Mayor, Christos Zannettou, said: ‘We believe that with this unique diving museum visitors will be able to enjoy an underwater oasis.’

The past 20 years have seen maritime ecosystems in the Mediterranean deplete radically, with eco-artists like deCaires Taylor determined to make a change. 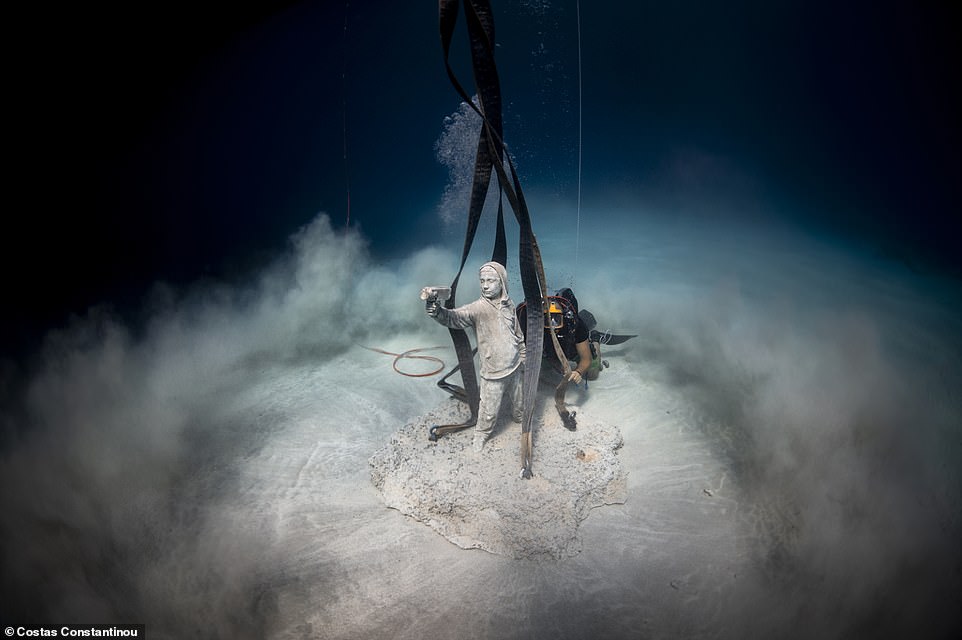 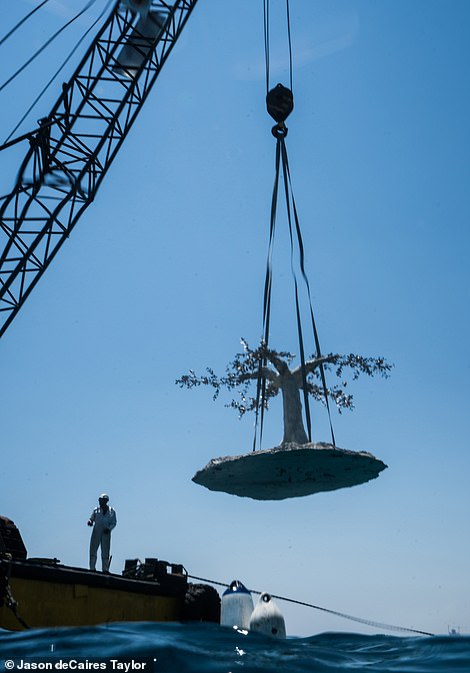 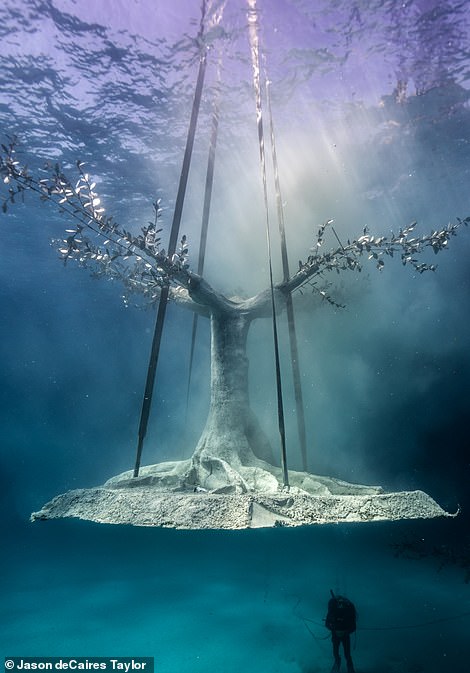 A crane, positioned 200 metres from the coast, helped to lower the weighty sculptures to the seabed 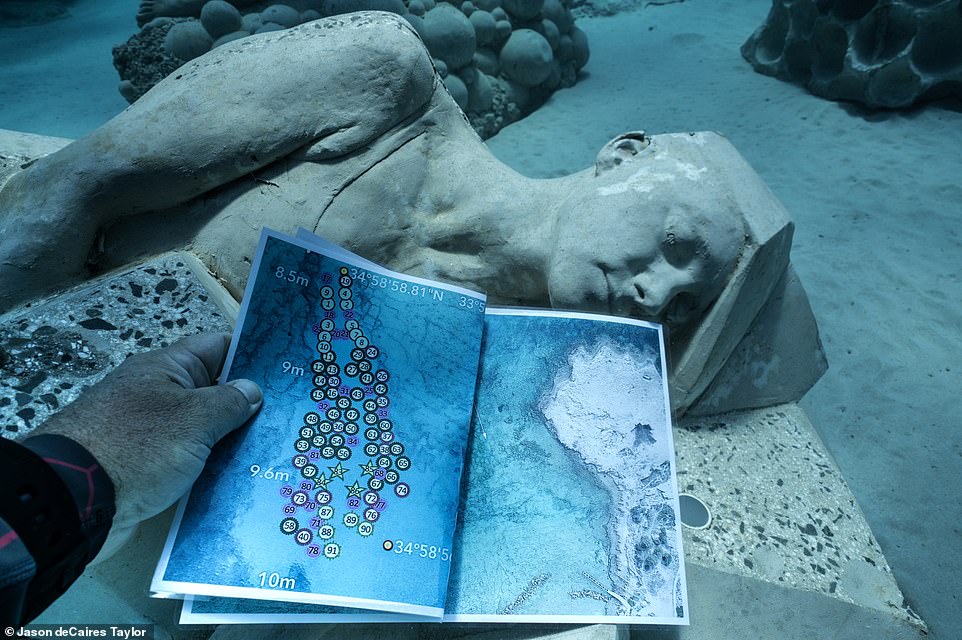 The qualified diving instructor is preoccupied with man’s impact on the earth in his work, which has a focus on biodiversity.

Musan is his second project to open in the Mediterranean this year. In March, he unveiled a series of six huge portrait sculptures off the coast of Cannes.

The site took four years to develop, and each artwork was inspired by a member of the community in the glamorous French resort, both old and young. 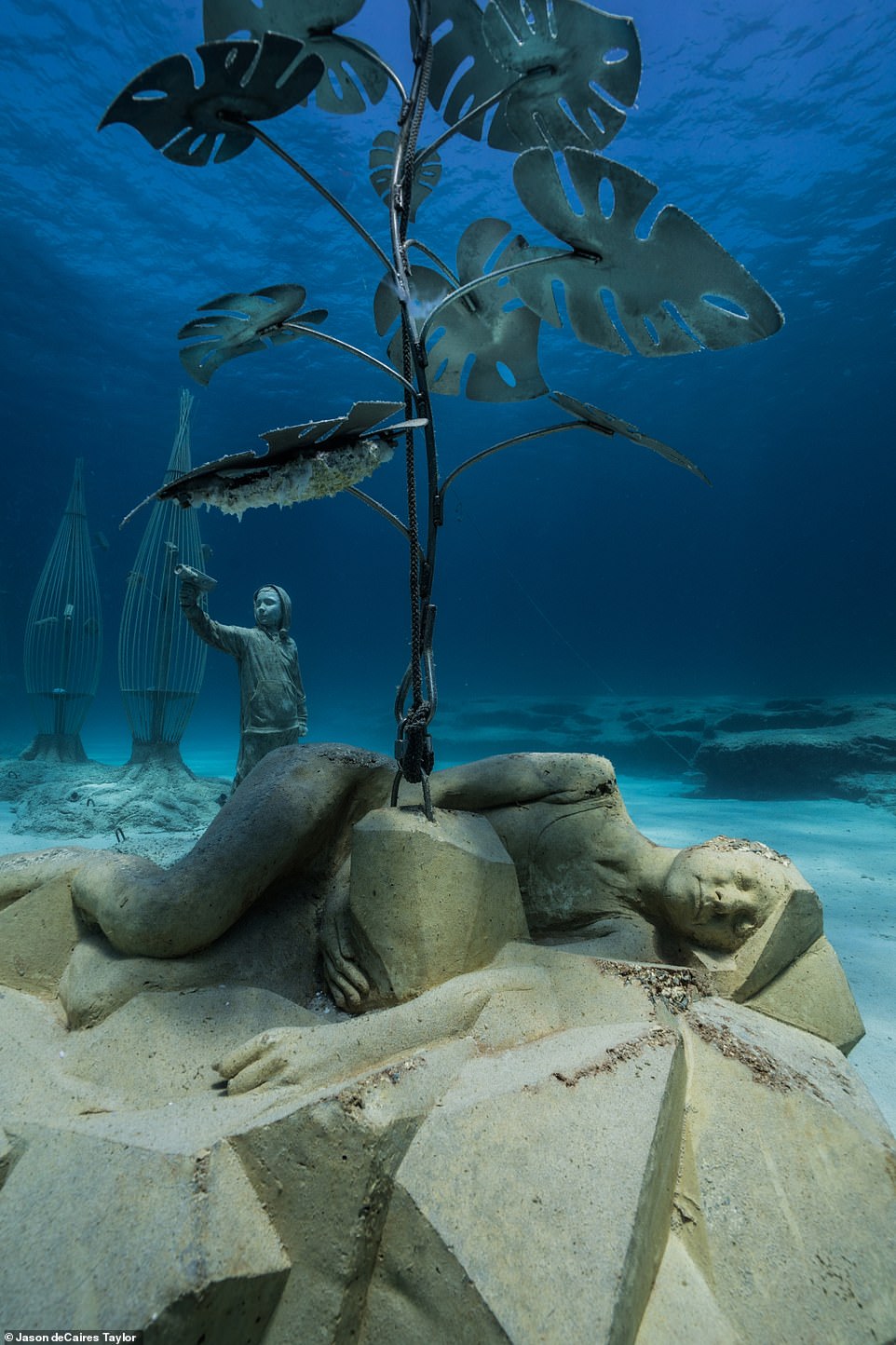 DeCaires Taylor has designed aquatic sculpture gardens across the world, everywhere from Mexico to Cannes 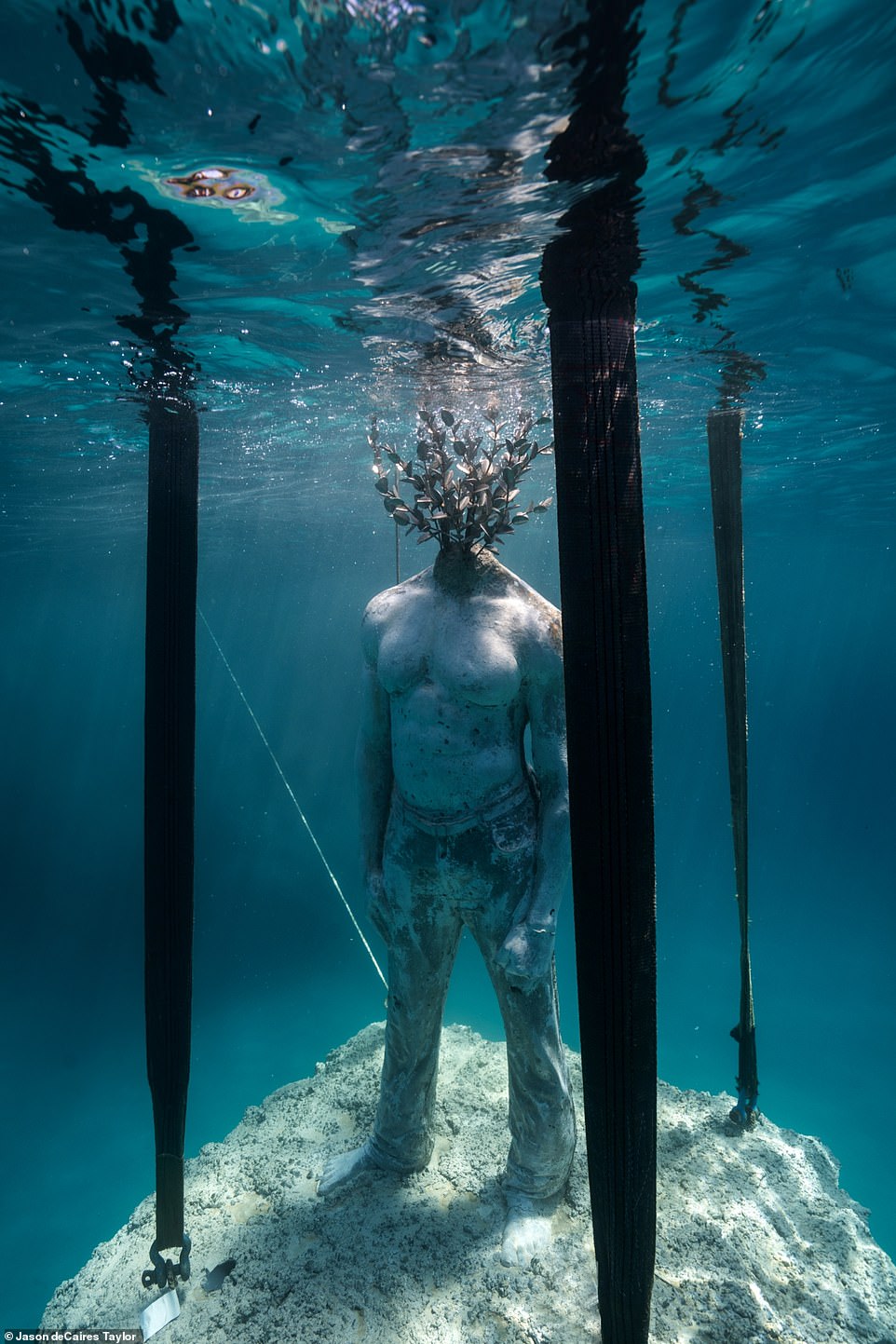 Marine life in the Mediterranean Sea has diminished over the past 20 years, and the artist hopes the installation will become an important area for biodiversity 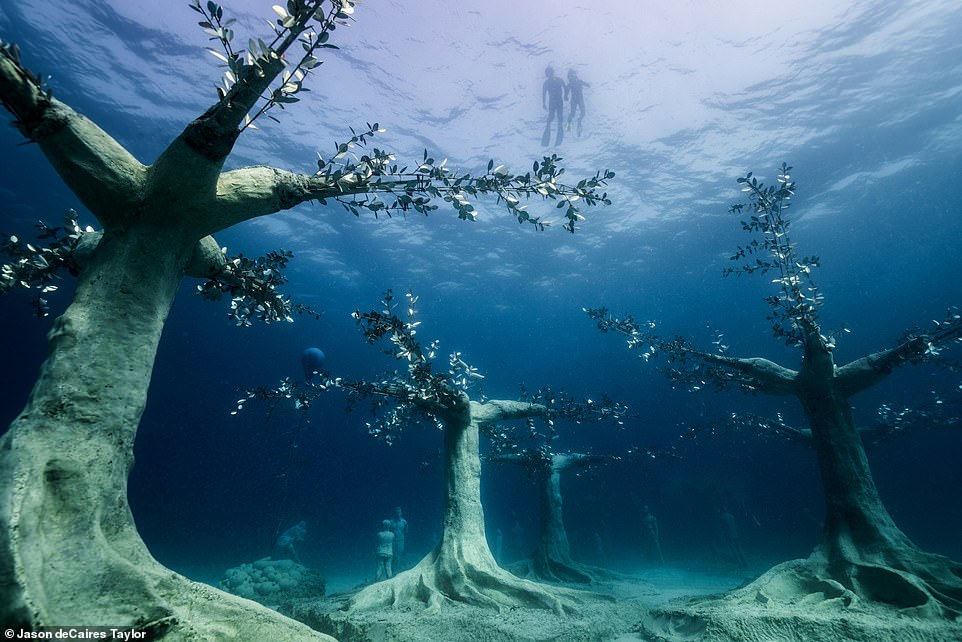 The haunting sunken forest will attract marine life in years to come, nurturing the Mediterranean’s ecosystem 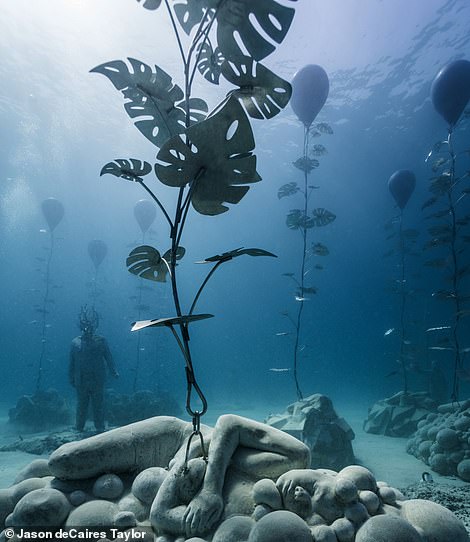 Musan is the artist’s second Mediterranean project this year

The artist’s first underwater museum was created off the Caribbean island of Grenada in 2006 and consists of 75 sculptures covering an area of 800 square metres (8,611 square feet).

His underwater museum in the Isla Mujeres National Marine Park in Mexico features over 500 permanent life-size sculptures, which are around 10 metres (32ft) below the water’s surface.

In 2014, deCaires Taylor unveiled an 18-foot-tall female Atlas sculpture kneeling on the ocean floor off the coast of the Bahamas and in 2017, he revealed Europe’s first underwater sculpture museum, featuring over 300 life-sized figures off the coast of Bahia de Las Coloradas in Lanzarote.

In 2018, a wave of controversy washed over deCaires Taylor. He created a tidal gallery called Coralarium at the Fairmont Maldives Sirru Fen Fushi, but it ended up being partly taken down by police after Abdulla Yameen, the former president of the island nation, ordered the sculptures in the installation to be demolished. 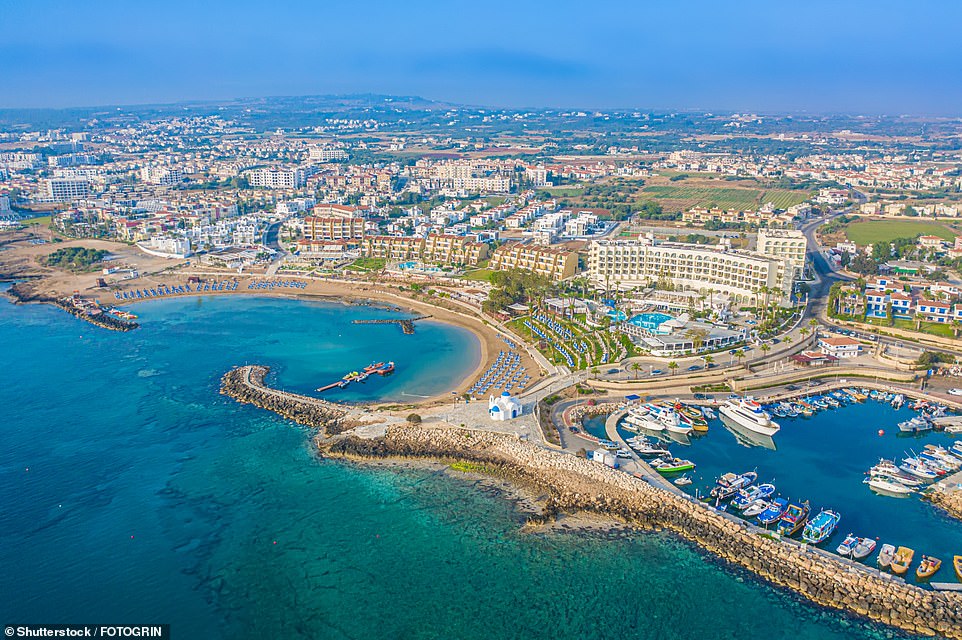 The underwater forest is based off the coast of party hotspot Ayia Napa, near the shores of Pernera Beach, pictured 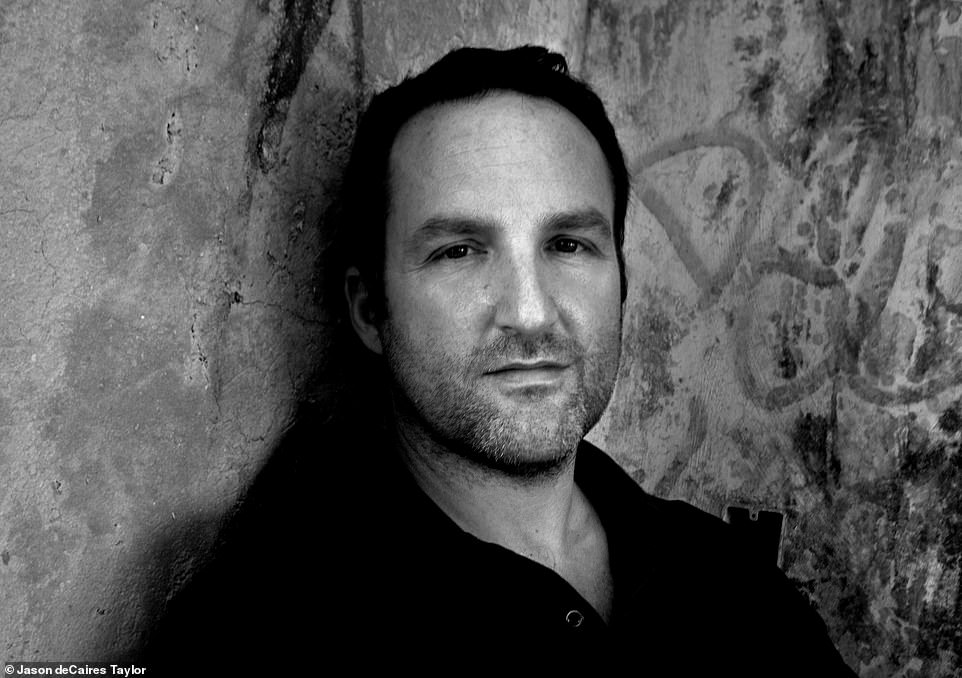 In March, Jason deCaires Taylor unveiled a series of six huge portrait sculptures off the coast of Cannes

Islam, the official religion in the Maldives, bans the depiction of idols, and the work provoked criticism from clerics even though the statues that were part of the gallery had no religious symbols or meaning.

Speaking at the time, deCaires Taylor said: ‘The Coralarium was conceived to connect humans to the environment and a nurturing space for marine life to thrive. Nothing else!’

The gallery still exists at the resort, but it now features new sculptures ‘constructed of more than 500 ceramic “starfish” that have been specifically designed to attract a variety of fish and crustaceans’. Click here to see what it looks like now.