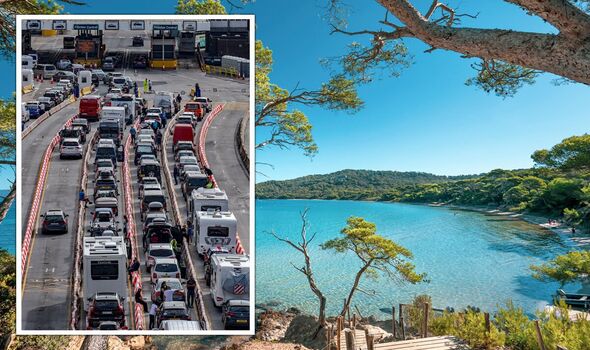 A new Entry-Exit System (EES) will be enforced from 2023. Tourism officials have warned the new system could increase queues for tourists.

The new rules, which apply to the UK since it left the EU, include fingerprint scans and captured facial images.

The system is likely to particularly impact those travelling by car as they will need to register for it.

ABTA’s director of public affairs, Luke Petherbridge told the House of Lords committee: “Across the industry there is pretty widespread concern about that.

“It will dramatically increase processing time for UK tourists. That is going to be a process that takes a significant amount of time. You are talking a matter of at least, several minutes instead of the 30 seconds or so that you may pass through the border.

“Clearly that is going to slow the process of moving passengers.”

Dover could be a particularly bad pressure point and it could be “incredibly difficult” to process Britons.

“But there has been no process designed -none, zero zip – for a busy ferry terminal to process car loads of passengers on dark stormy nights.

“Even at the busiest times right now, with new post-Brexit rules, passport checks are taking 45 to 90 seconds per car.

“With the pre-registration involved a car with a family of four or five in it could take up to 10 minutes.”

EU countries have also said that queues could lengthen for non-EU visitors, with the Slovenian Government telling The Independent the process would take “four times longer”.

Austria has said the processing times would be at least “double compared to the current situation.”

The Entry/Exit System will be an automated IT system for registering travellers from third countries each time they cross an EU border.

The new system will register the person’s name, type of travel document, biometric data and the date and place of entry and exit.

EES will record refusals of entry and will replace the current system of manual passport stamping.

At the moment, British tourists have to have their passport stamped every time they enter and leave the EU.

British tourists can travel to countries within the EU for 90 out of every 180 days without a visa.

Within the Schengen Area, which includes Spain and Portugal, tourists can stay for 90 days at a time.

Romania and Bulgaria are not in the Schengen area and tourists can stay for 90 days out of every 180 there without it compromising their Schengen time.