Calling all foodies: Truffle hunting in Tuscany is bellissimo… and especially wondrous when the base of operations is a magnificent 16th-century hotel set in a breathtaking landscape

The truffle is more historic than we might realise. Perhaps this is the fault of self-styled haute cuisine restaurants draping them all over unrecognisable pizzas and burgers, alongside gold leaf and caviar.

But walking in the Tuscan forest with Princess Irina Strozzi, whose family has lived at Villa Cusona — a wine estate 45 minutes from Florence — since at least AD994, the fungus’s place in Italian tradition is clear. 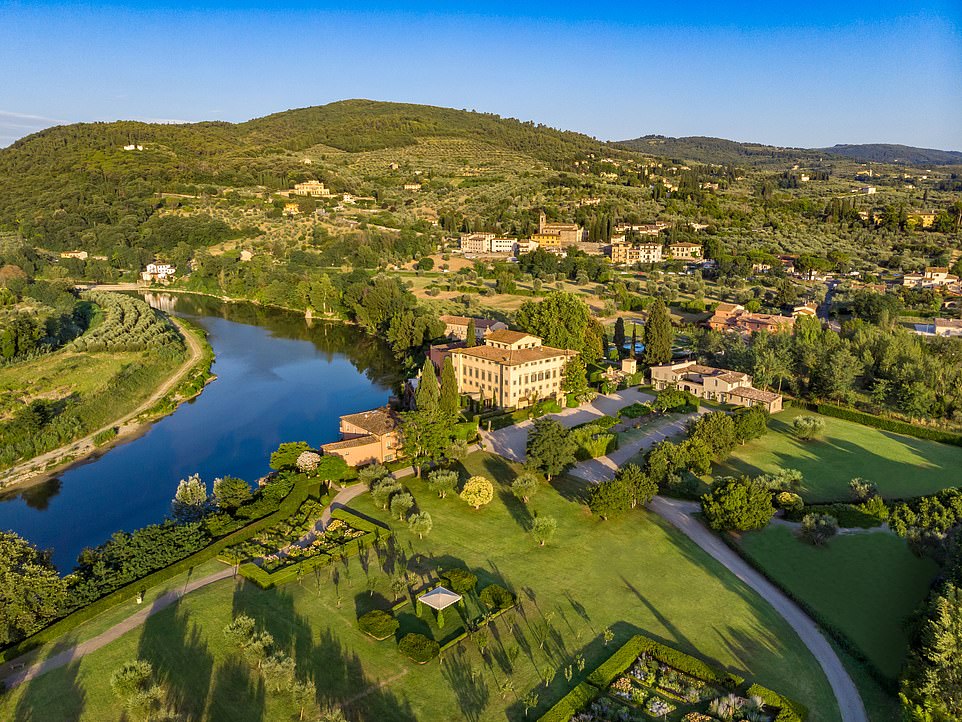 Villa La Massa is in a 16th-century Medici villa 20 minutes or so from Florence, and sits on a sluggish bend of the Arno river 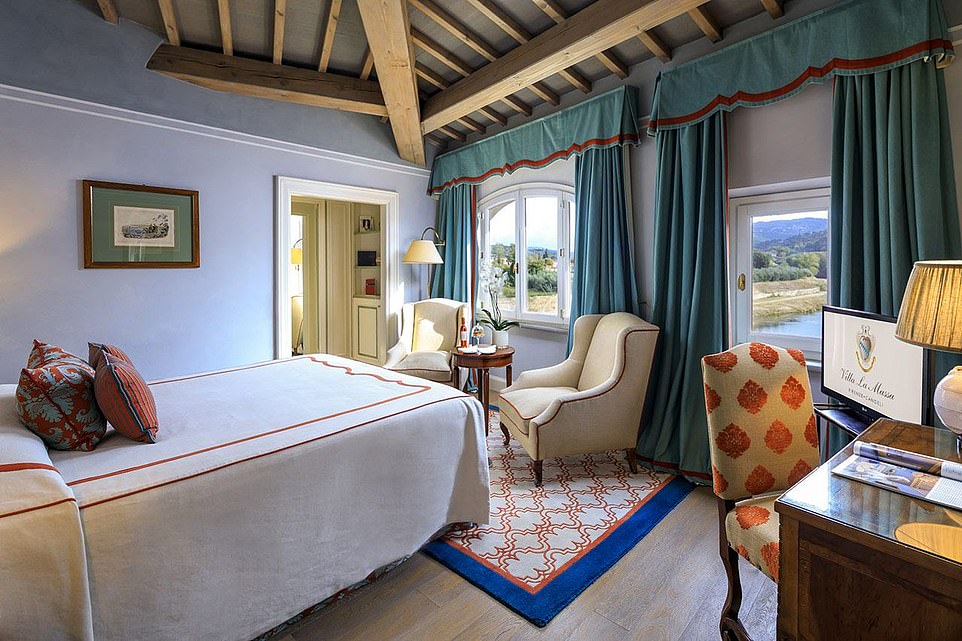 Tuscan tradition: There are 51 rooms and its high-ceilinged entrance hall is ringed with Tuscan coats of arms

She explains that truffles have been hunted by the Italian aristocracy for hundreds of years.

She met truffle master Andrea Galli seven years ago, and the pair now scour the 1,500-acre estate with dogs every morning, searching for white truffles, which are considered to be some of the best in the world.

Visitors can take a half-day truffle tour here. It’s organised by Villa La Massa, the 51-room hotel where I’m staying, which is a 40-minute drive away.

White truffles are the strongest in flavour and aroma, but the high prices they command are not down to taste alone.

‘They grow only in Italy and Istria, need particular soil conditions, and have never been cultivated,’ says Princess Irina.

‘What also makes them special is that the harvest season [of September to November] is short.’

The first recorded mentions of truffles date back to the 20th century BC. Popular with the Romans and Greeks, legend has it they were created when thunderbolts thrown by Zeus hit the earth.

And since then they have struck various chords with diners. 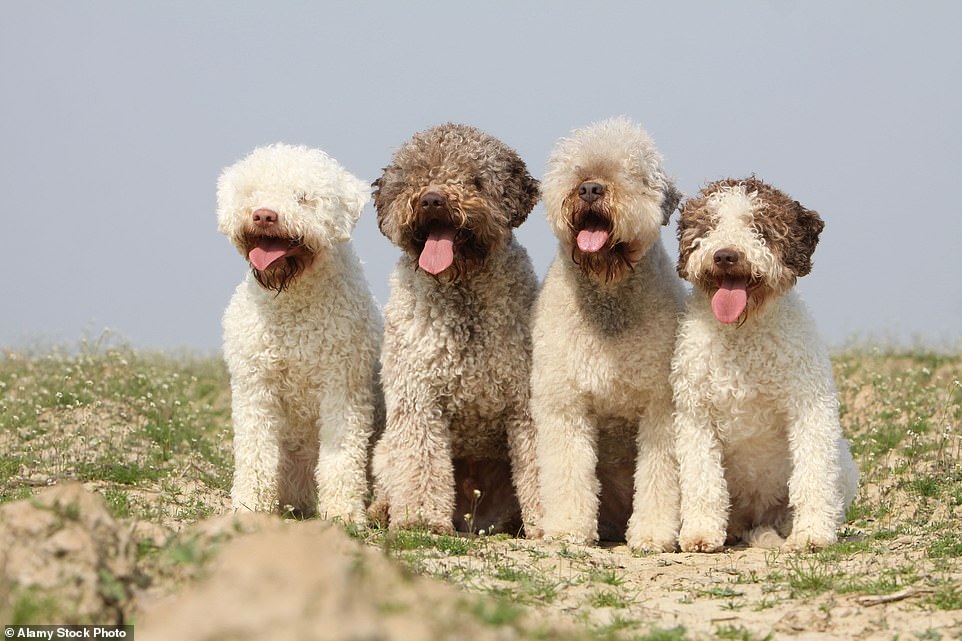 The Lagotto Romagnolo is an Italian breed of dog often used to hunt truffles. They can cost almost £7,000

They were once thought to be an aphrodisiac, and the medieval church deemed them ‘the food of the devil’ due to their exotic smell. In the 19th century they became ‘the Mozart of mushrooms’.

With a flurry of dirt and wagging tail, Macchia the truffle hound lets Andrea carefully pluck a dirty object from the ground. Its aroma is unmistakeable.

In centuries gone by, the fungus was rooted out by pigs. But now dogs — more agreeable to delicate noble sensibilities — have the job. 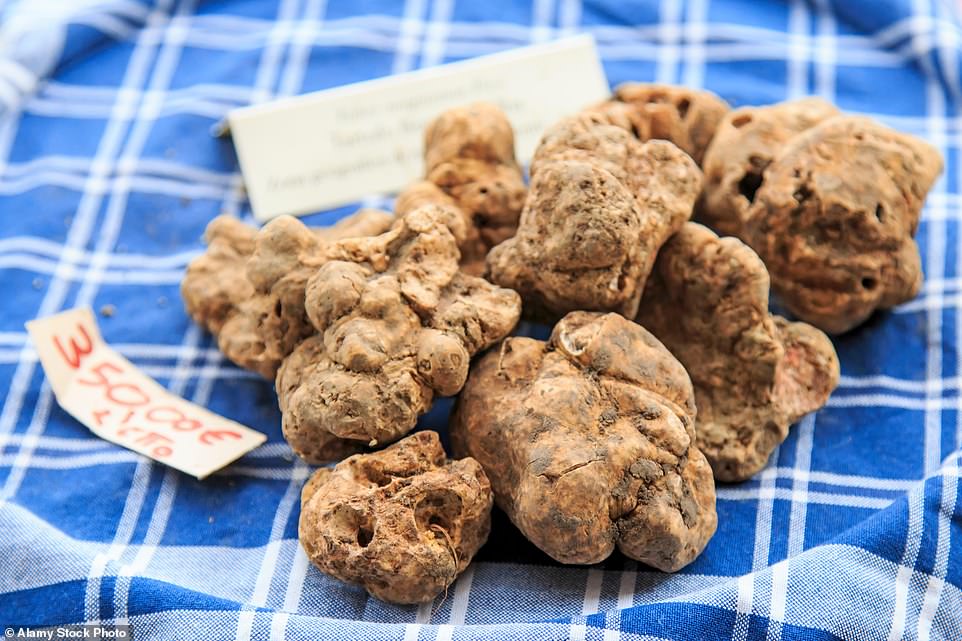 White truffles are the strongest in flavour and aroma, but the high prices they command are not down to taste alone

It’s also easier to prevent hounds like Macchia, a Lagotto Romagnolo, from eating their finds. Although the look of adoration she gives her master after each successful dig indicates there’s little danger of that.

After all, she was meticulously trained by Andrea over four years, resulting in a dog which can cost almost £7,000.

Sadly, this means the animals are sometimes stolen, as are truffles. This is why the hounds are trained to be silent and tracks are covered. Cameras have been installed on the estate, and tall fences border the forest. Many hunts are commercialised, with the prized fungi hidden like Easter eggs — another problematic side to the business. But that’s not the case here.

Hugo stayed at Villa La Massa (villalamassa.com) which has rooms from £416 B&B and can organise truffle hunting at Villa Cusona (guicciardinistrozzi.it/en).

BA (ba.com) has London to Florence flights from £129 return.

The shaggy-haired hounds run around in the afternoon light, discovering 156g (about £500 worth) of fresh white truffles.

After the tour we sample our finds in butter, in honey, shaved onto eggs and aged in pecorino. The Tuscan belief is that truffles should be used as an elegant means of enriching dishes such as pasta, risotto and meat.

During one evening at Villa La Massa it appears with every course of our meal — even the closing scoop of vanilla ice cream. The hotel is in a 16th-century Medici villa 20 minutes or so from Florence, and sits on a sluggish bend of the Arno river.

Its high-ceilinged entrance hall is ringed with Tuscan coats of arms. My palatial room is in the Limonaia (which used to house the estate’s lemon trees), and was renovated last year.

It’s a world where, according to the agreeable staff, everything is spectacular or gorgeous and nothing will take more than 15 or 20 minutes.

One evening I leave a book open on my bedside table. When I return it has been closed on the correct page, with a bookmark provided. Upon arrival in Florence — the hotel offers a regular shuttle service — truffles don’t appear as much as you might expect.

Frankly, it’s a relief, because walking among the grand architecture and sprawling piazzas, I get the sense that they wouldn’t be quite the same here.

Not without the flurry of dirt, the wagging of tails and the voice of Italian nobility to guide me through the experience.