Ten members of a small Indian tribe in the remote Andaman and Nicobar Islands have tested positive for coronavirus.

Four of them, who were found to be infected last week on Strait Island, apparently caught the virus during a recent visit to Port Blair, the capital of the Andaman and Nicobar Islands. The other six patients are based in the city, where they have full-time jobs, and tested positive earlier this month.

It’s thought only 50 Great Andamanese tribe members survive after thousands were killed by British colonisers in the 19th century or died later due to disease. Dr. Avijit Ray said the four islanders seen last week are among the 37 members of the tribe who live on Strait Island.

Health workers went there to test tribe members and those who tested positive are now being treated and ‘recovering well’.

The Andaman and Nicobar Islands, a chain of islands with a population of about 400,000, have reported 2,944 coronavirus cases, including 41 deaths, mostly among non-tribal groups.

Other vulnerable tribes on the Andaman and Nicobar Islands include the Sentinelese, Jarawa, Shompen and Onge.

Dr Ray said health workers are trying to protect these tribes from the virus too.

‘We are keeping a close watch on the movements and testing some of the other tribes,’ he said.

Sanjiv Mittal, a senior government officer for tribal welfare, told AFP authorities were doing their best to keep all the members safe and healthy.

Anthropologists and activists for isolated tribal communities say more than 5,000 Great Andamanese lived in the islands when British settlers arrived in the 19th century.

However, hundreds were killed in conflicts as they defended their territories from British invasion, and thousands more were wiped out in epidemics of measles, influenza and syphilis, according to Survival International. 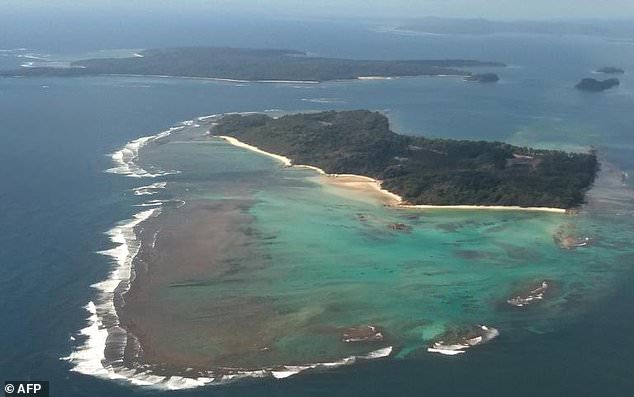 The Andaman and Nicobar Islands is a chain of islands with a population of about 400,000. Pictured is Boat Island

Poachers continue to invade their territory despite strict government restrictions.

And in 2018, a 26-year-old American missionary seeking to convert the nomadic hunter-gatherer tribe was killed after he secretly visited the North Sentinel island. His body was never recovered.

Outsiders are banned from visiting the island, to protect the Sentinelese way of life and avoid exposing them to infectious diseases.

As one of the most isolated tribes in the world, the Sentinelese are extremely vulnerable to diseases from outsiders, especially during a global pandemic such as the coronavirus, experts say. 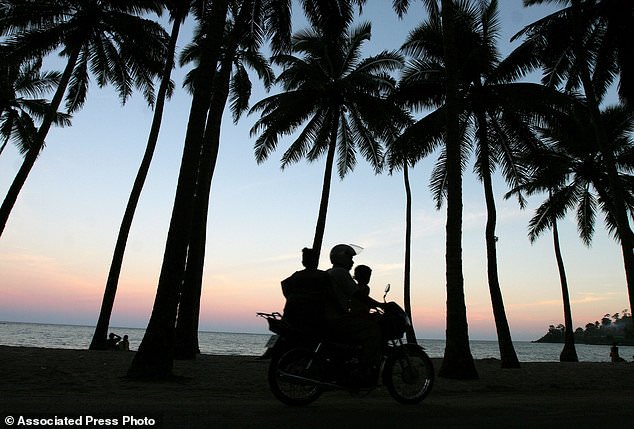 India is the third worst-hit country in the world behind the US and Brazil, with more than three million coronavirus cases. Pictured is Port Blair

‘The Andaman authorities must act urgently to prevent the virus reaching more Great Andamanese and to prevent infection in the other tribes,’ said Sophie Grig, a senior researcher with Survival.

‘The waters around North Sentinel must be properly policed and no outsiders should enter the territories of any of the Andaman tribes without their consent.’

She added: ‘We’ve certainly seen in the US, in Brazil, in Peru, indigenous communities (being) disproportionately hit. In Brazil where there are more than a hundred uncontacted tribes still living, (the) fear of the disease is getting into those communities.’

The virus has already hit tribes in Brazil and Peru hard, including some of the isolated Amazon tribes.

According to the Brazilian Indigenous Peoples’ Association, 26,000 indigenous people have been infected and 690 have died during the country’s pandemic.

India is the third worst-hit country in the world behind the US and Brazil, with more than three million coronavirus cases. There, some 60,000 people have died from the infection so far.