A couple who abandoned their cruise plans due to the coronavirus crisis recreated the holiday – from the comfort of their living room.

Dave and Norma Trill, both 74, from Melbourne, were due to go on a 10-day Royal Caribbean cruise around the Pacific islands to celebrate their 53rd wedding anniversary.

But when they decided it was best to cancel, they refused to let their spirits sink. Instead, they threw on their bathrobes, relaxed on their armchairs with glasses of wine and put a video of a gently undulating seascape on their TV – as the next best thing. 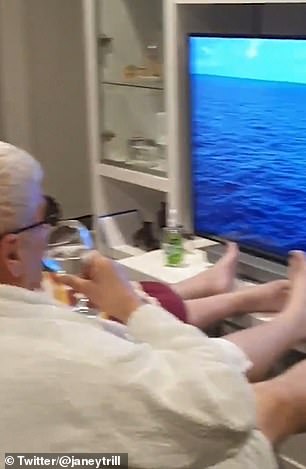 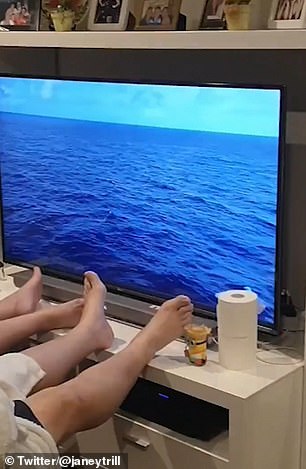 Dave and Norma Trill, from Melbourne, recreated their abandoned cruise in their living room. A video of the scene, posted by their daughter on Twitter, has gone viral

A clip of the DIY ‘cruise’ was filmed by the couple’s daughter Jane, who posted it on Twitter, writing: ‘Cruise cancelled? No problem.’

It shows them looking out at the water on their TV screen as they clink their wine glasses, while their grandson makes a foghorn noise in the background.

The video has now gone viral, with thousands of views on social media.

Jane told MailOnline Travel: ‘They were supposed to be going on a 10-day cruise around the Pacific islands next week, but unfortunately they made the difficult choice to cancel due to the coronavirus.

‘I had an idea that if I put a video up of water on their TV and they dress as though they would on their cruise, they might not feel so disappointed as they were really looking forward to going to celebrate their 53rd wedding anniversary.

‘Needless to say, we all had a chuckle over making the quick video. My son even provided the ship noise using his phone while I recorded.’

Those watching the hilarious video on Twitter were impressed with the couple for trying to overcome their disappointment, with Lorne Crabtree writing: ‘I love this!’

While Jazzy J tweeted: ‘A unique idea. I love it. It looks just like as if they are looking off the balcony. Beautiful.’

According to Cruise Passenger, the couple are now planning a sequel.

Royal Caribbean halted all its cruise operations worldwide shortly after the video was posted. It plans to resume operations on April 11.