‘While some businesses have survived and thrived on the Mother Road, others are rusting ghost-town relics, but both are equally fascinating.’

So writes publisher Pavilion of Route 66 Then and Now, which compares vintage photographs of the US highway with modern pictures taken from the same angle.

The book was written by author and photographer Joe Sonderman, who has spent years collecting thousands of postcards and archival images of Route 66.

It winds the clock back to the opening of Route 66 in 1926, exploring how it connected Chicago with Los Angeles over 2,250 miles (3,621km) away – and breathed life into the small towns and businesses along its path.

The highway was made redundant by the unveiling of the 1-40 in 1984, Sonderman reveals, but state associations soon formed to keep Route 66 alive and kicking. Though many of the landmarks along the way have fallen into disrepair, others have been preserved and restored to their original glory.

‘Route 66 Then and Now highlights some of the most famous stop-offs along the route, showing them in their prime and how they look today,’ the publisher adds. Scroll down to see a selection of mesmerising old and new pictures from the book… 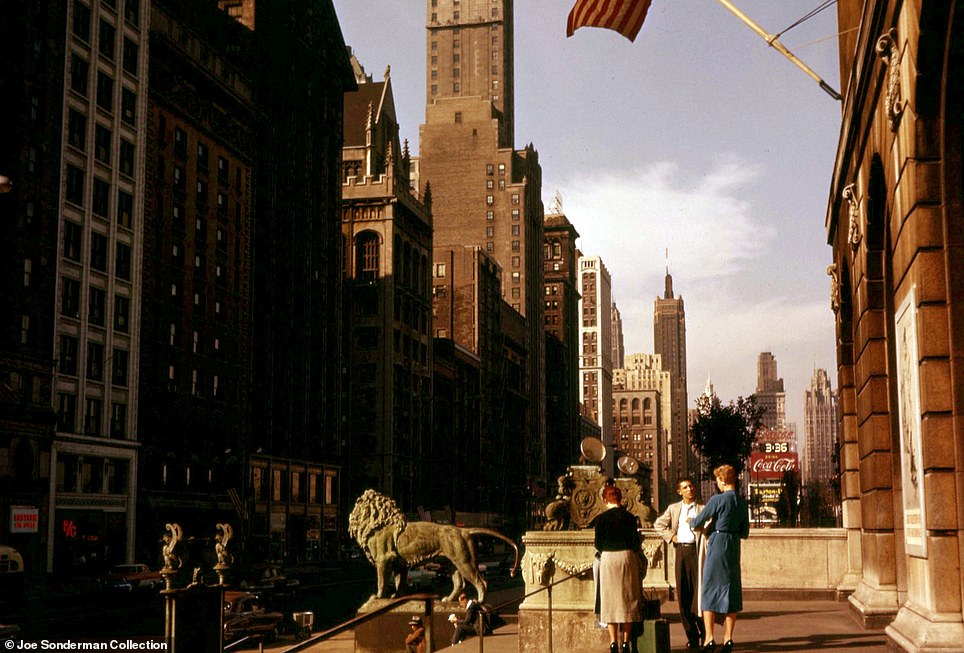 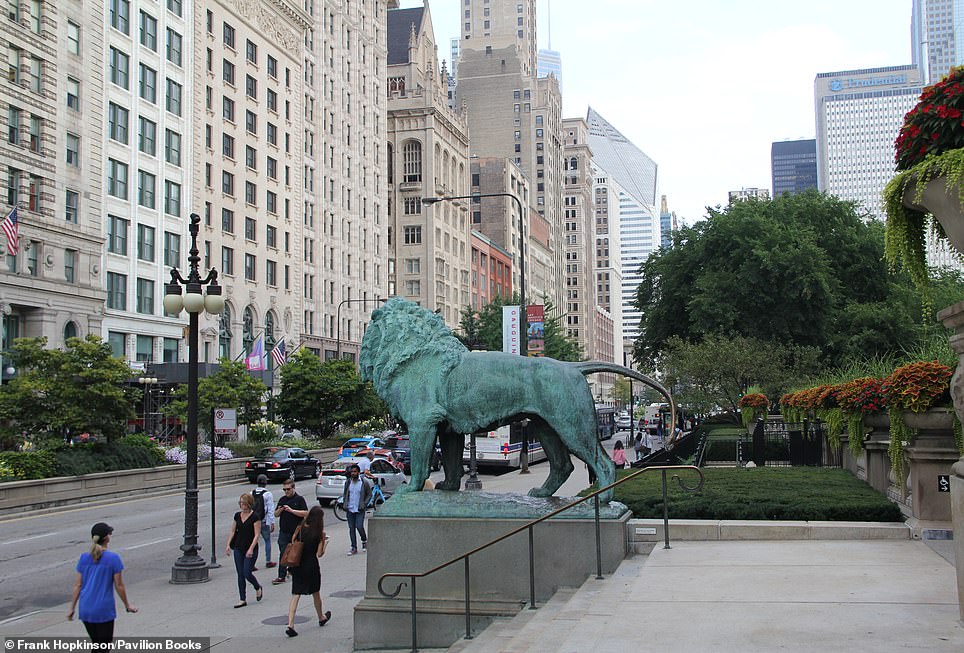 MICHIGAN AVENUE, CHICAGO, THE START OF AN EPIC ROAD TRIP: The photograph on the left dates back to 1965 and was captured on the steps of the Art Institute of Chicago on Michigan Avenue – which lies right opposite the official signpost marking the start of ‘Historic Route 66’ on East Adams Street. The route is carried out of Chicago by Ogden Avenue, which passes through the Cicero district, the former home base of gangster Al Capone 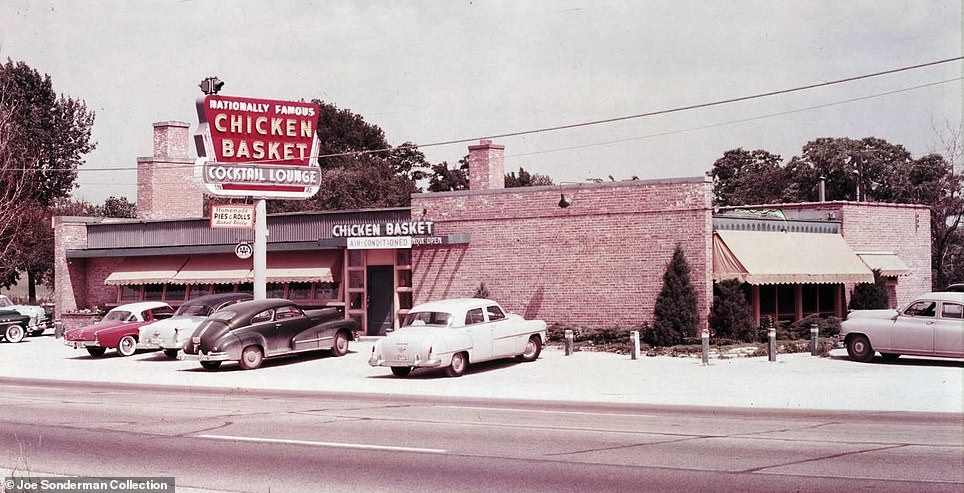 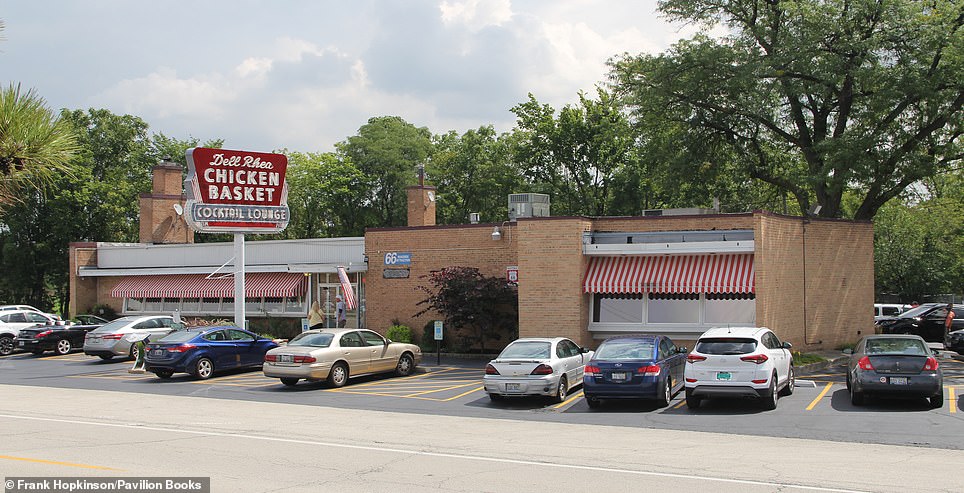 CHICKEN BASKET, WILLOWBROOK, ILLINOIS: Cast your eye to the left and you’ll see the landmark Chicken Basket Restaurant as it appeared in 1954. Located at Route 66 and 74th street in Hinsdale, the eatery originally operated as a simple gas station lunch counter. However, the book reveals, when two local women gave owner Irv Kolarik a recipe for fried chicken, business began to boom. To attract business in the winter, Sonderman says that Kolarik used to flood the roof to create a temporary ice rink and hire skaters. Then Interstate 55 was constructed and the restaurant was left ‘isolated on a service road’. The premises was bought by Dell Rhea and his wife for a ‘bargain price’ in 1963. The author says: ‘They worked hard to bring back the customers. Offering some of the best fried chicken in the Chicago area, the restaurant is as popular as ever.’ The original sign still exists, though it was restored in 2017, we learn 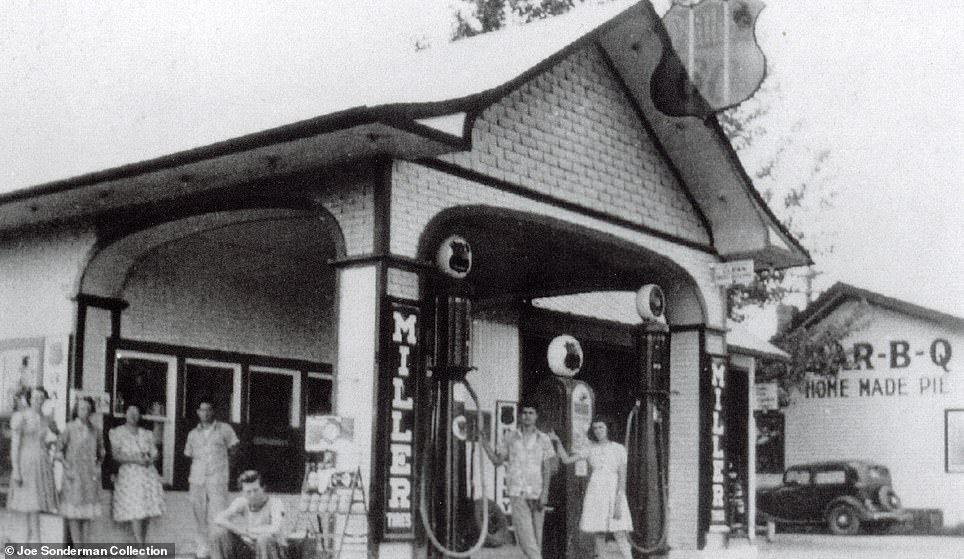 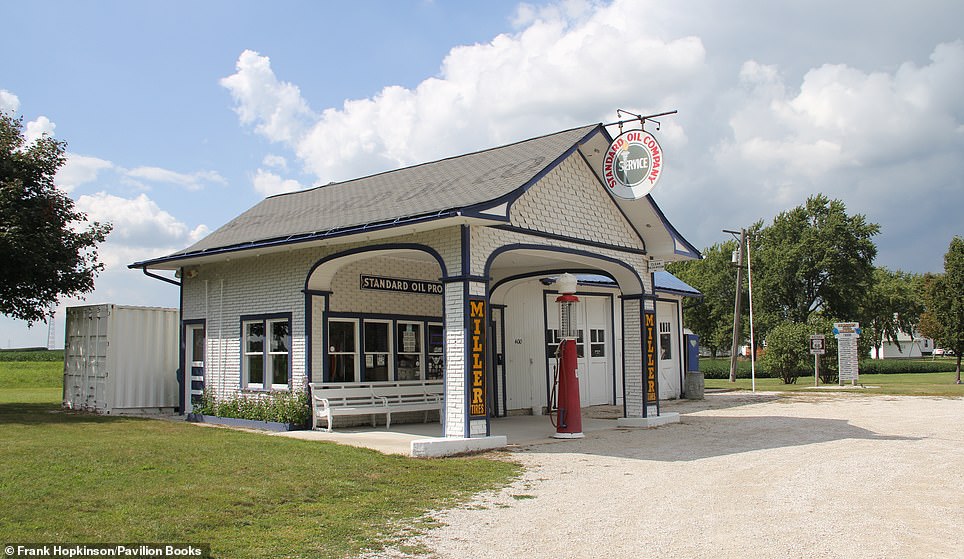 O’CONNELL’S SERVICE STATION, ODELL, ILLINOIS: Pictured to the left is O’Connell’s Service station in 1940, eight years after it was opened by Patrick O’Connell. At that time, Sonderman says, the station stocked Phillips 66 gas, a name inspired by Route 66. O’Connell designed the station to look like a house with a canopy, hoping to ‘make customers feel at home’. Sonderman writes: ‘It became a body shop in 1967, closed in 1975, and began to deteriorate alongside the old road.’ Thankfully, Odell’s residents grouped together to save the service station, eventually purchasing it in 1999. After being restored it now serves as a welcome center, the author adds 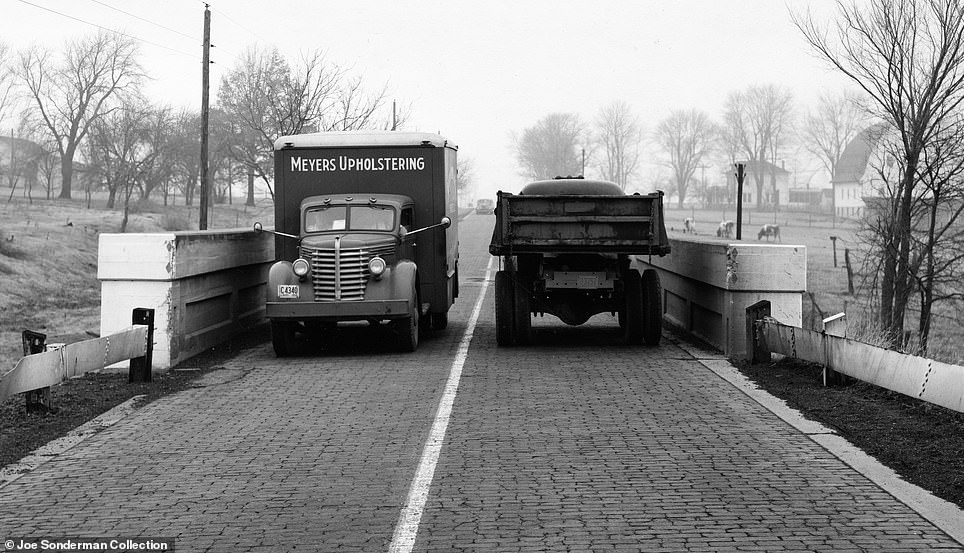 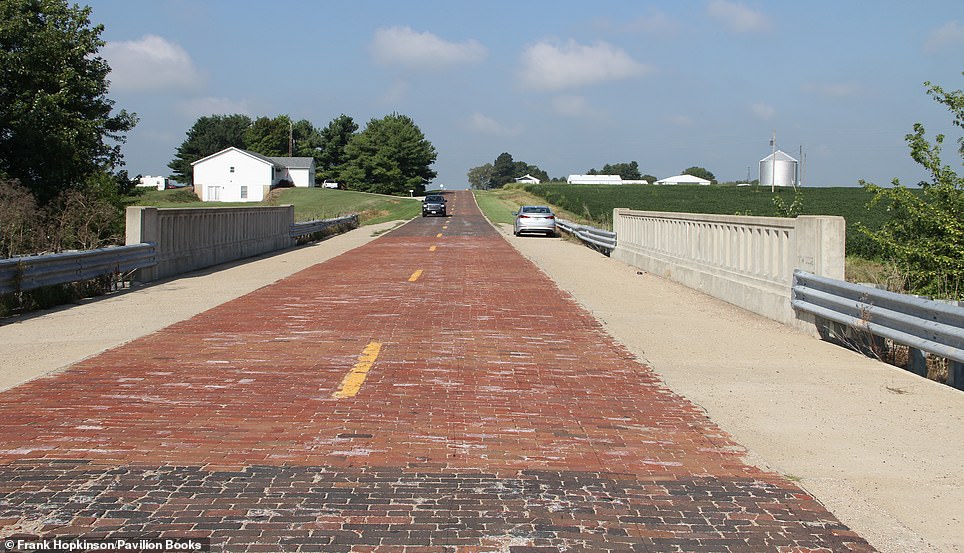 BRICK PAVEMENT, AUBURN, ILLINOIS: Going south from Springfield, heading west, Sonderman explains that the Route 66 traveller can choose between driving along the modern route, or taking the ‘more scenic 1926-1930 route that zigs and zags through the cornfields and small towns to Staunton’. This route is pictured to the left in 1940. Ten years before the photograph was taken, Route 66 was moved further east, occupying different roadways. The author reveals: ‘In 1931, after Route 66 was relocated, sections of the road were paved in brick to create jobs – and because a high-ranking politician owned a brick factory.’ This section of brick pavement south of Chatham can still be driven today on a route that is now known as the IL 4 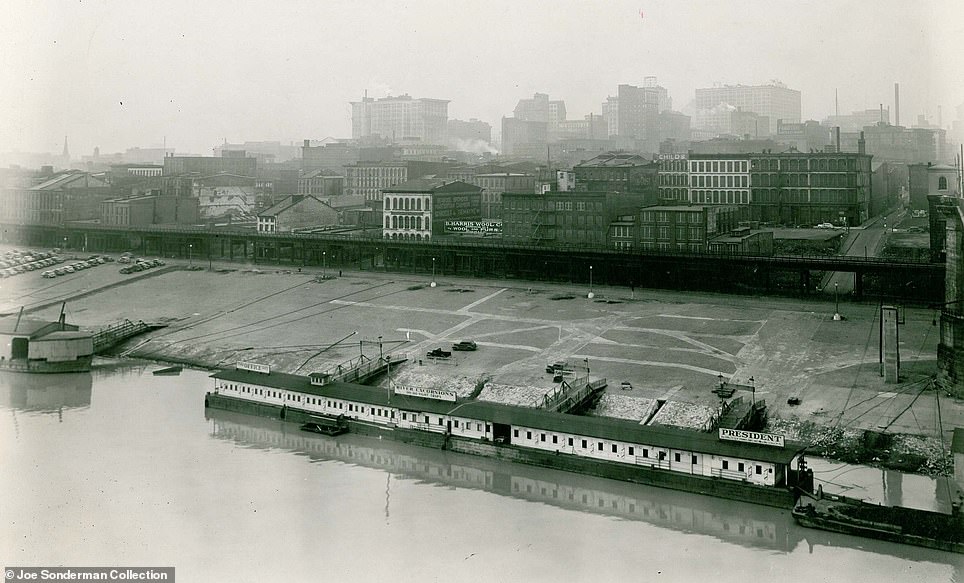 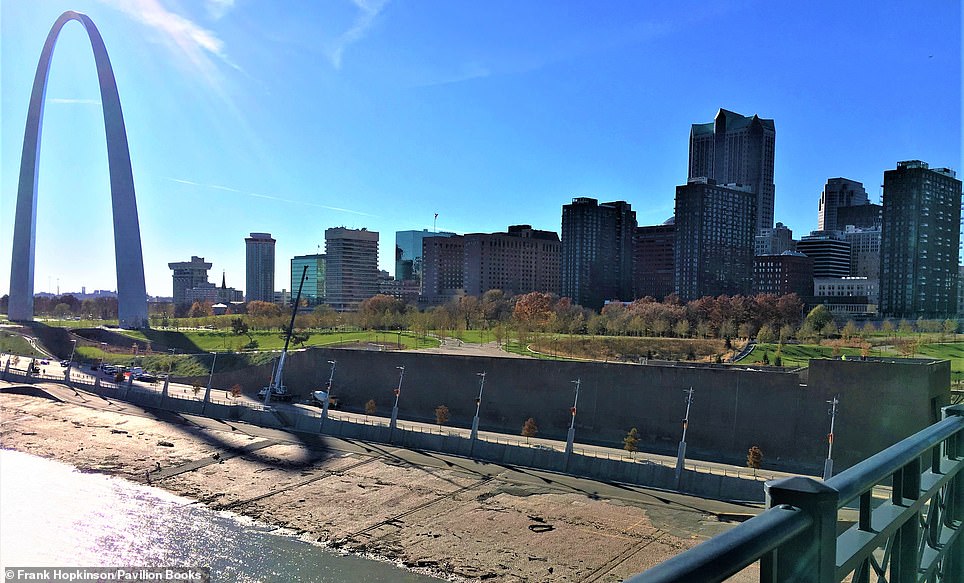 GATEWAY ARCH, ST LOUIS, A MONUMENT TO THOSE HEADING WEST: The image on the left dates back to 1936, showing the riverfront of the ‘Gateway to the West’ – St Louis. Though it was originally a busy hub filled with steamboats, Sonderman reveals that the riverfront deteriorated by the mid-1930s and it was subsequently cleared to make way for the Gateway Arch. Construction began in 1959. The author says: ‘The Gateway Arch, completed in October 1965, will always dominate the skyline of St Louis. A local ordinance says no building can be taller than the 630ft-tall, stainless steel landmark’ 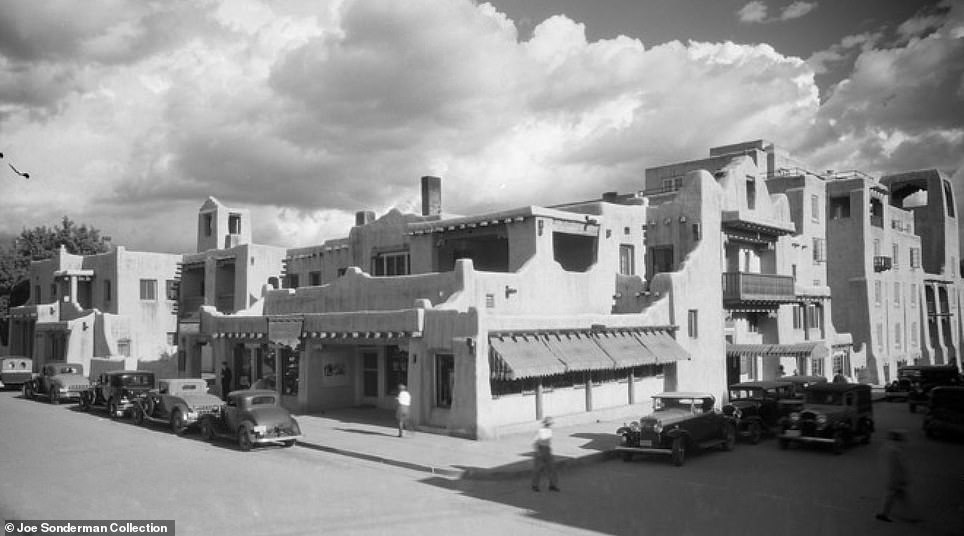 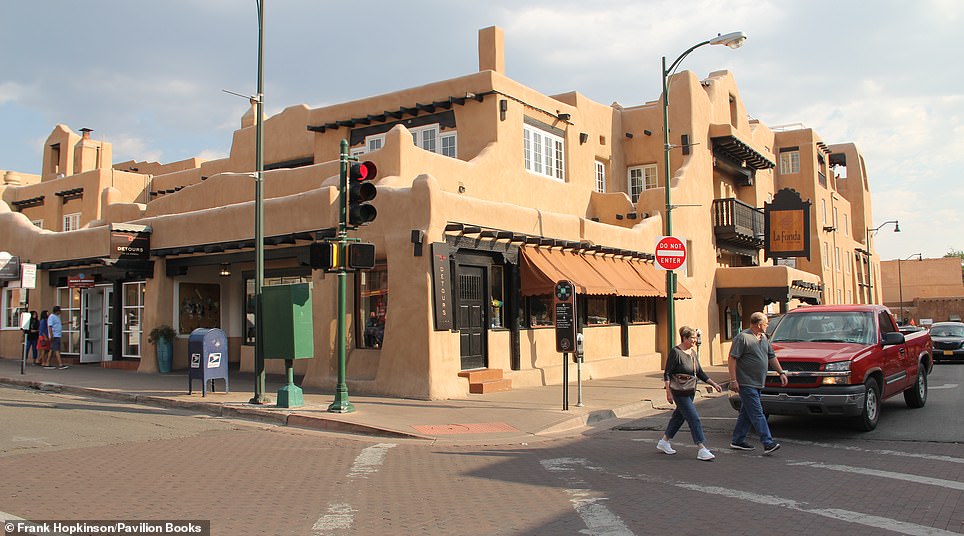 LA FONDA HOTEL, SANTA FE: Sonderman describes Santa Fe as ‘the most historic city on the original Route 66’. The photograph on the left depicts the city’s La Fonda hotel back in 1930. According to the author, there has been an inn – or a ‘Fonda’ in Spanish – on this corner since as early as 1607, but the current Pueblo Revival building was constructed in 1922. At one point, The Fred Harvey Company made the hotel the headquarters for its ‘Indian Detours’, which opened the Southwest to tourism. Over the years, the hotel has been frequented by celebrities including John F Kennedy and Ronald Reagan, and several guests claim to have witnessed ghosts during their stay. The book adds: ‘The completely renovated luxury hotel is now known as La Fonda on the Plaza, and family ownership is committed to carrying on the 400-year tradition of hospitality’ 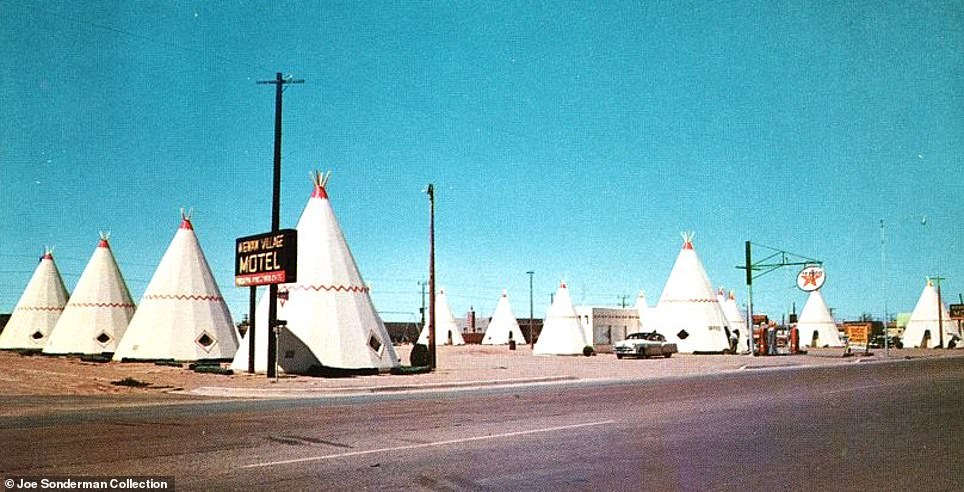 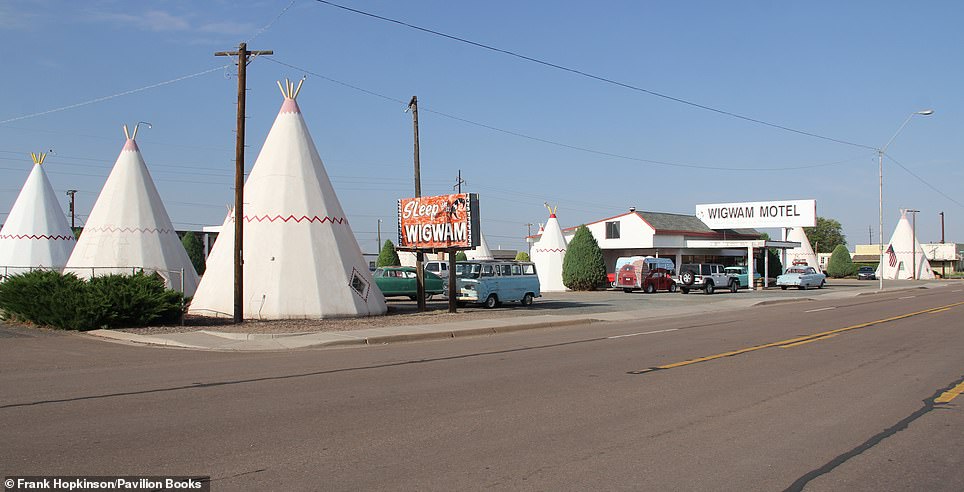 WIGWAM MOTEL, HOLBROOK, ARIZONA, ONE OF THREE SURVIVING WIGAM MOTELS: The image on the left was snapped in 1950 and shows the Wigwam Village Motel in Holbrook in the year it was opened by one Chester Lewis. At the time it was the sixth wigwam motel in America (the country’s grand total peaked at seven). The ‘iconic’ tipi design was the work of Frank Redford, the book explains, who built them out of concrete. Redford gave Lewis the rights to the design ‘in exchange for the proceeds from the pay radios located in each of the 15 units’, we’re told. The Wigwam Village Motel closed in 1974 and Lewis sold the business, the book says. He died in 1986 and his children reopened the motel in 1988. ‘Part of the former office now showcases Route 66, Civil War, and Native American artefacts collected by Chester,’ the book explains. Today, it’s one of three surviving Wigwam Motels in the US – the other two can be found in Rialto, California, and Cave City, Kentucky 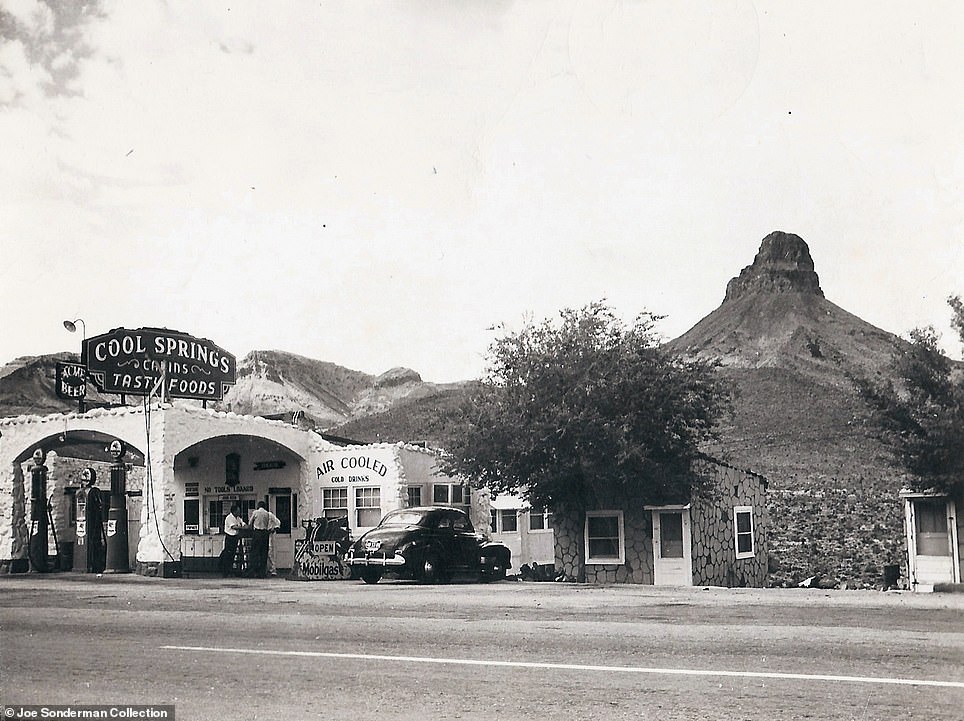 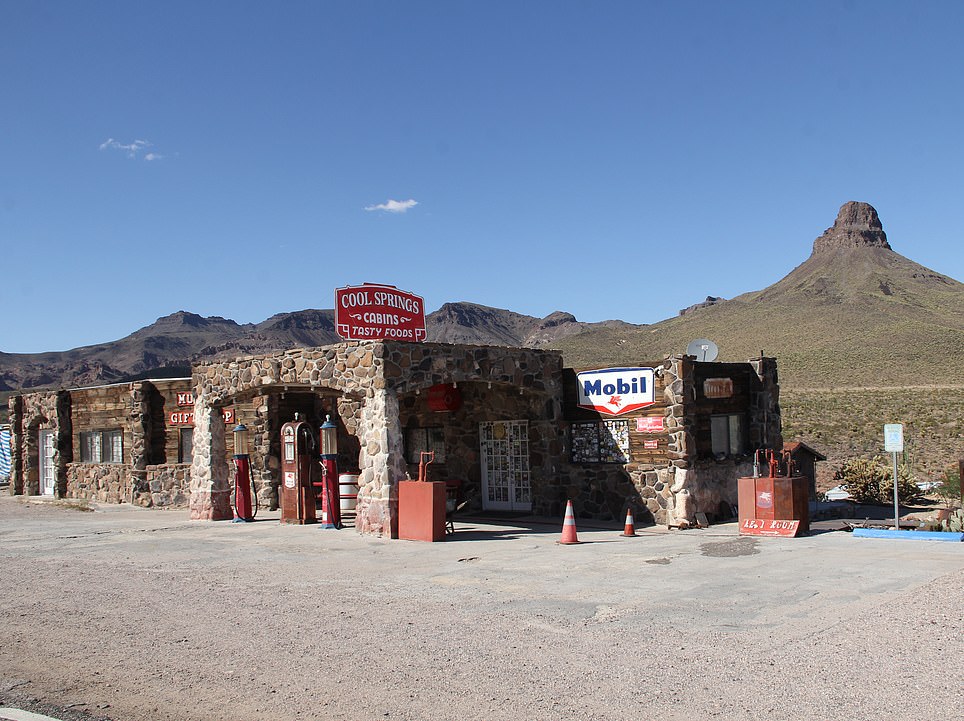 COOL SPRINGS, ARIZONA: Cool Springs Camp, seen on the left in 1940, was opened in 1926 by N R Dunton, who connected the building to a spring using a pipe, the book reveals. The then-gas station, which sits under ‘Squaw’s Teat’ mountain, was taken over in 1936 by a married couple who added the rock exterior. It was later bypassed by the new Route 66 roadway and became a poultry ranch, only to be left abandoned completely in the 60s. It burned down in 1966. Sonderman says: ‘Hollywood came calling in 1991 and producers constructed a gas station from the ruins just to blow it all up for a scene in the movie Universal Soldier.’ Ned Leuchtner bought what remained of the premises in 2002 and has since turned it into a ‘nifty gift shop and a mini museum’, he adds 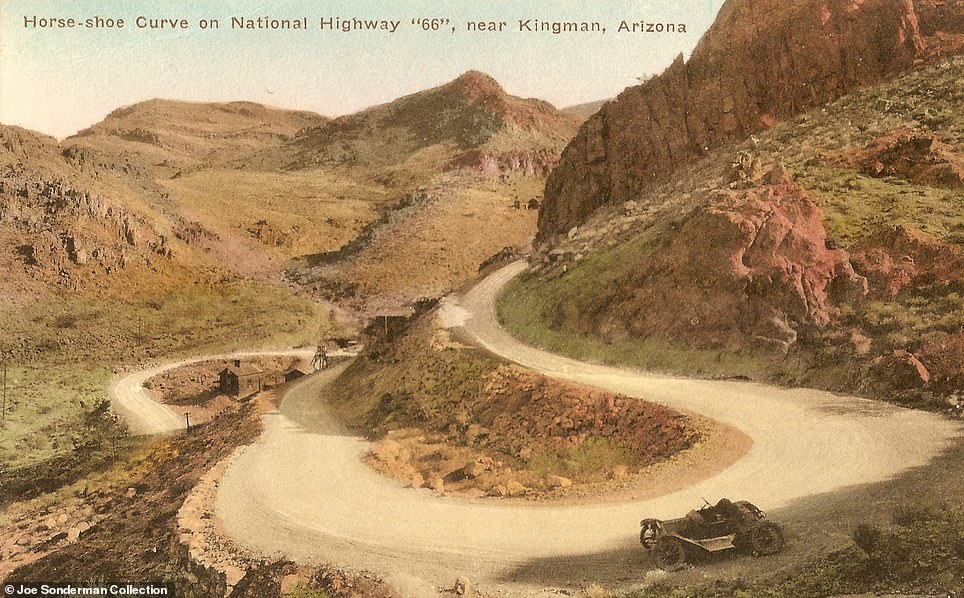 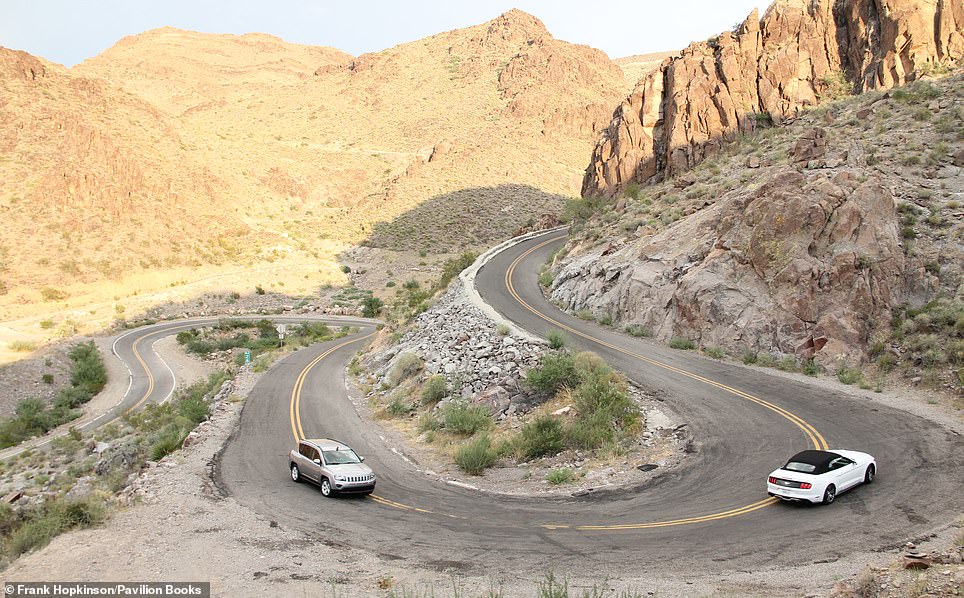 HORSESHOE CURVE, GOLD ROAD, ARIZONA: Look to the left and you’ll see a postcard dating back to 1928, showing the horseshoe curve near the old mining town of Gold Road. ‘It was a white-knuckle drive for drivers who came from back East,’ declares Sonderman of the roadway. Motorists travelling along Old Route 66 would ascend the 3,550ft (1,082m) high Sitgreaves Pass and drive down through Gold Road – until it was bypassed in 1952. The author states: ‘The twisting and turning road was so challenging that service stations would charge a hefty fee to tow timid drivers over the pass. In the days of gravity-fed carburettors, it wasn’t unusual to meet a local driving up the hill backwards’ 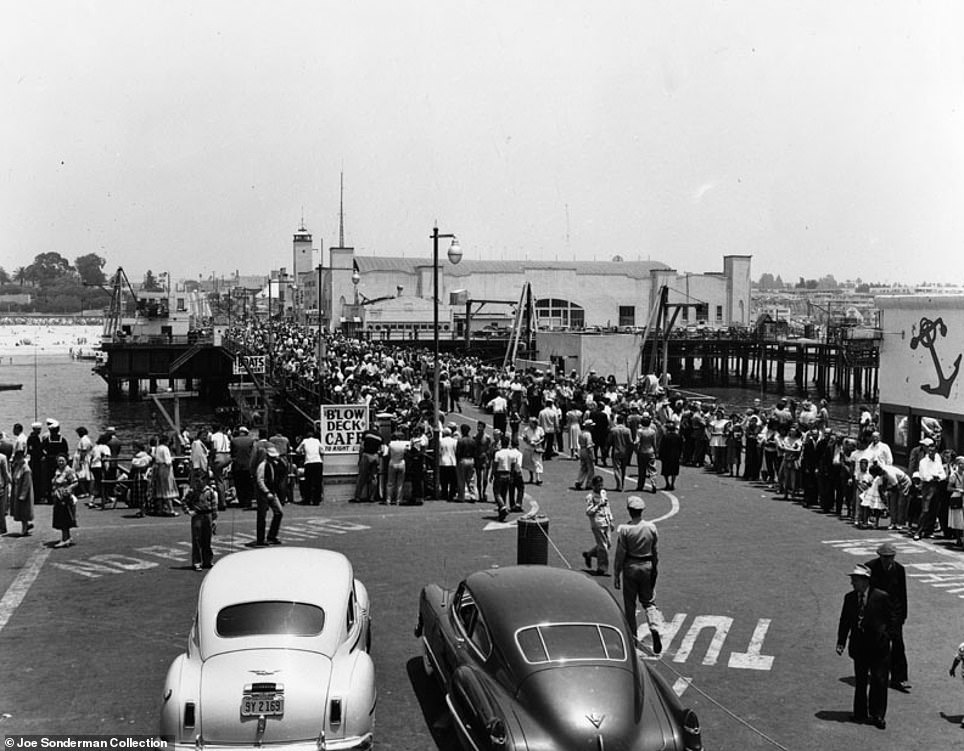 PIER, SANTA MONICA: The snapshot on the left shows the pier in 1941. It opened in 1909 having been built to bring sewage out to the sea. ‘Route 66 ends over the Pacific Ocean on Santa Monica Pier, and the last few yards have to be made on foot,’ says Sonderman. He reveals that ‘the bureaucrats decreed that US highways must end at another US route, so 66 officially ends at Alternate US 101’ – a ‘nondescript intersection’. However, Santa Monica Pier is the symbolic end of the route, he adds. On Route 66’s 83rd birthday, Dan Rice installed an ‘End of the Trail’ sign on the pier outside his 66-to-Cali store – ‘a more appropriate spot to contemplate the journey’ 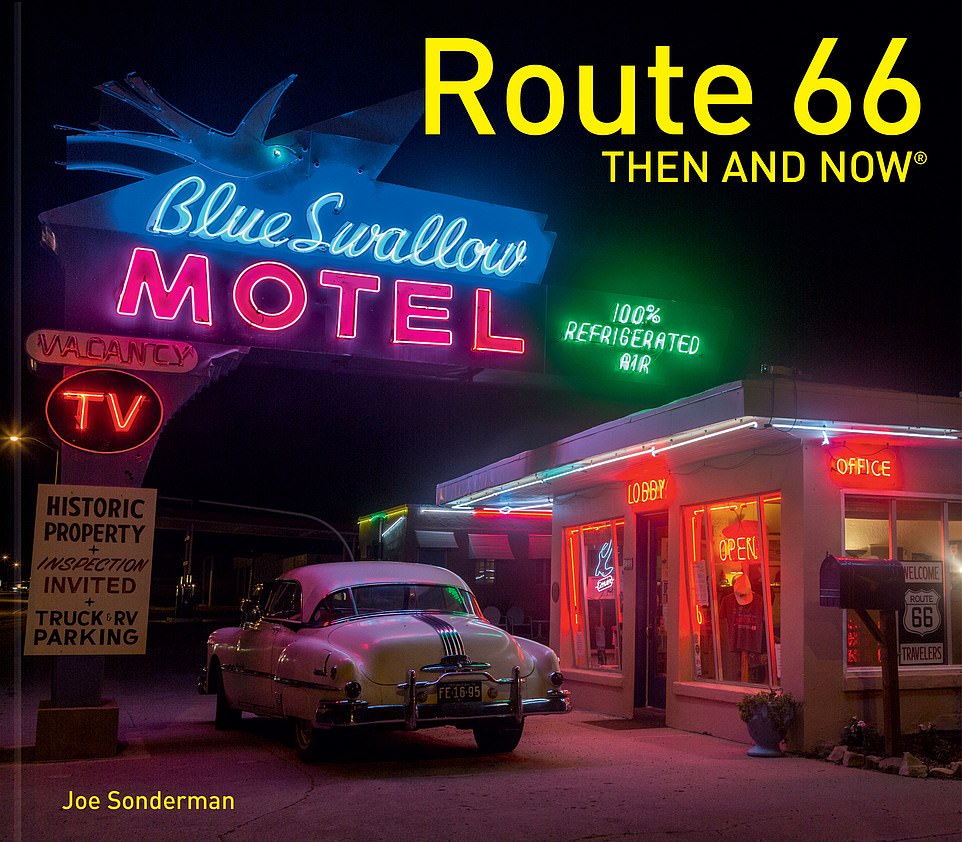 Route 66 Then and Now by Joe Sonderman is published by Pavilion, priced £14.99