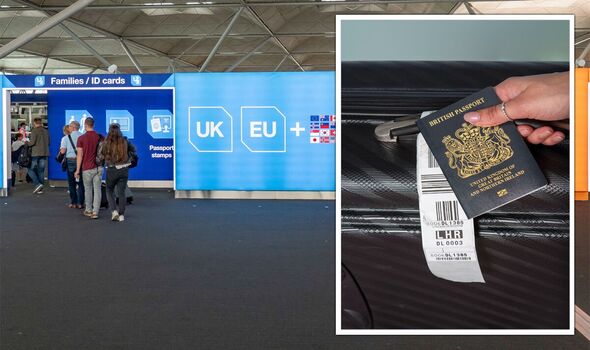 The cost of a new passport is set to rise from February 2. This will be the first time in five years the fee has increased.

The proposals are subject to Parliamentary scrutiny but the price of passport applications for adults and children are expected to rise.

Priority service fees will be aligned so that all customers will pay the same price for the service.

The Government said the new fees would help the Home Office move towards a system that meets its costs through those who use it rather than relying on taxation.

It said it does not make any profit from the cost of passport applications and that fees would also contribute to consular support overseas.

This is often used to help people who have lost or had their passport stolen while on a holiday.

It added that the new cost would help the Government to improve its services for users and cover the fees of processing British citizens at UK borders.

A UK passport usually expires after 10 years but in some cases tourists may need to renew it earlier.

Since the UK left the EU, British tourists are counted as non-EU citizens if they want to travel to the bloc.

This means their passport must be valid for at least three months on the date they want to exit the EU.

Some travel experts advise people to travel with at least six months left on their passport to be on the safe side.

Passport rules differ around the globe and tourists should check the entry rules for their destination on the UK Government website before travelling.

If a passport needs to be renewed, tourists are advised to apply as early as possible as there can be a long wait.

British tourists can only stay in the EU for 90 out of every 180 days since the UK left the bloc.

They need to get their passport stamped on entry and exit or they could be accused of overstaying.

If their passport isn’t stamped at the border, tourists could use their plane ticket to prove when they entered or exited.

Later this year, the EU is set to introduce a new entry system called ETIAS which will be managed online.

Britons and other non-EU travellers will need to apply for an ETIAS online to travel to the EU and pay a small fee.

The ETIAS will be valid for three years and should eliminate the need for passports to be stamped at EU borders. The launch of the new system is planned for November.