Google Maps Street View is a great way for users to find specific directions. The handy tool captures street-level images of towns and cities across the globe, transferring them into a virtual world which users can click around.

It does this by attaching 3D cameras to the top of dedicated Google Maps cars, which then travel around taking photographs.

These images are then stitched together in post-production to create the virtual street scenes.

Along the way, however, they can pick up some rather unexpected sights.

This is often particularly down to the people it captures in its images. 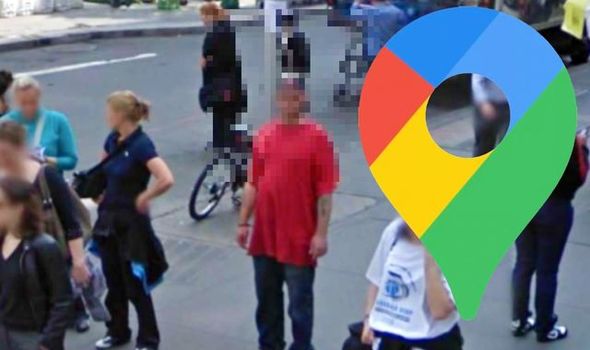 Such was the case in a busy metropolitan scene, where one man’s actions with a cat left viewers shocked.

The moment unfolds in a bustling street, where people can be seen going about their daily business.

The main focus of the shot is on a path, running alongside a busy city intersection.

In the background, a man can be seen unloading goods from a truck.

Elsewhere in the shot, two women can be seen stopping to enjoying a quick chat.

In the foreground, a woman appears to be on her telephone, walking along mid-conversation.

None of these people are doing anything particularly surprising for a normal day in the city.

However, it is a man at the centre of the scene that is the real oddity. 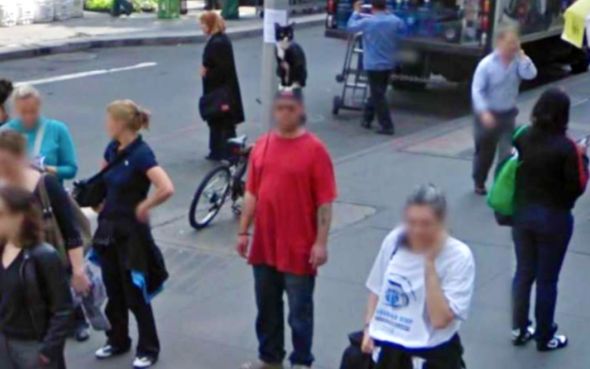 He is dressed in an oversized red t-shirt, a pair of blue jeans and some white trainers on his feet.

He also appears to be wearing a backwards baseball cap.

However, it is the random addition to his headwater which is really striking.

Indeed, sat atop his head is a black and white cat.

The cat does not appear to be alarmed or uncomfortable and is perched rather calmly on top of the baseball cap.

The man also does not seem fazed by the fact there is a cat on his head.

A black cord can be seen running from the cat’s collar, down past the man’s face to his hand.

It appears the cat could be the man’s pet, given that it is attached by a leash.

Perhaps this is just a typical day for one man and his cat, or maybe he is a street performer and his balancing cat is his special act.

Alas, Google Maps users may never know, as the man’s identity is concealed by the tech giants facial blurring technology.