A threatened sea mammal has been spotted exploring waters that are now undisturbed thanks to the coronavirus pandemic lockdown.

Drone video footage released by the Department of National Parks shows a 30-strong herd of dugongs in shallow waters off Libong island in Trang province.

They were feeding on seagrass and occasionally surfaced to breathe. 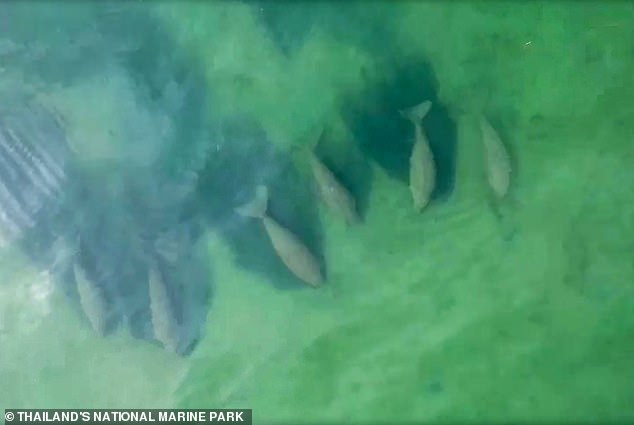 Naturalists report other marine animals are also taking advantage of the tourism slump that is leaving coastal regions tranquil and undisturbed.

Human intrusion and marine pollution have made dugong sightings in southern Thailand rare in recent years.

‘It’s quite unusual,’ marine scientist Thon Thamrongnawasawat told The Associated Press on Thursday when asked about the dugongs. ‘This species of mammal is very sensitive to speed boats and people. When they are gone, they feel free to gather in a large group and come close to shore.’

Dugongs – closely related to the manatee or sea cow – are officially classified as vulnerable. They can grow up to 11 feet in length. Thailand’s population is put at around 250. Last year a record number of dead dugongs were found in Thai waters. 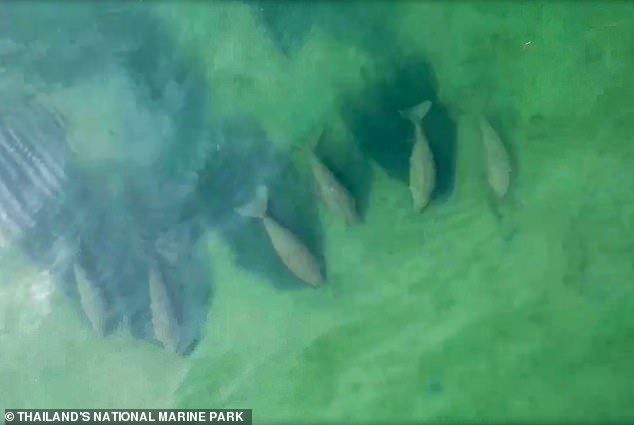 Five dugongs, part of a larger group of the sea mammals, cruising slowly in the shallow waters of Chao Mai Beach national park in Trang province 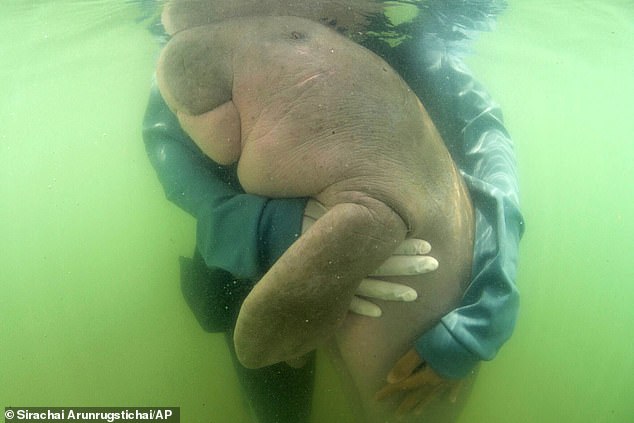 In this Thursday May 23, 2019, photo, an official of the Department of Marine and Coastal Resources hugs Marium, a baby dugong separated from her mother, near Libong island. She sadly died two months after this photograph was taken as a result of gastritis and blood infection caused by plastic waste in her intestines

Their fate captured attention last June after images circulated of Thai vets cuddling an ailing baby dugong and hand-feeding her with milk and seagrass.

Despite the care, she died two months later. A post-mortem found a large amount of plastic waste in her intestines that had caused gastritis and blood infection.

Mr Thon said there were also reports this week of large schools of sharks coming unusually close to shore in several places in southern Thailand, and a sighting of a pod of false killer whales. 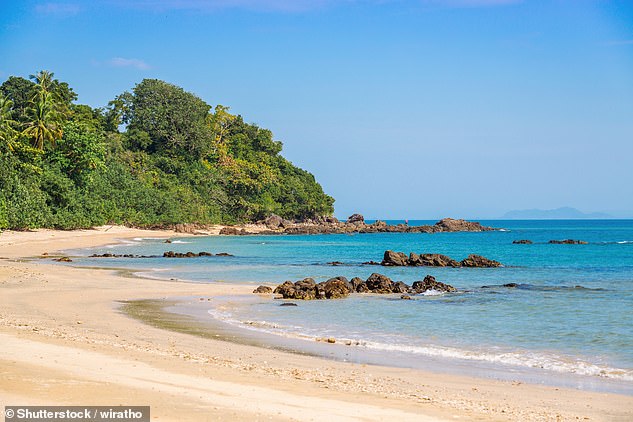 Video from park rangers on Phi Phi island shows 70 to 100 blacktip sharks in the shallow waters of Maya Bay, made famous by the Leonardo DiCaprio movie The Beach.

The bay was closed to tourists in June 2018 for ecological recovery, and the island’s entire national park has been shut since March to prevent the spread of Covid-19.

Park rangers also counted 10 to 15 false killer whales, another protected species, near the popular tourist island of Koh Lanta, the first time they have been seen in that area.