The heart-stopping landing at Skiathos Alexandros Papadiamantis Airport was branded the lowest ever witnessed and caught on tape by tourists observing the plane’s arrival from just outside the runway. The beach close to the Greek airport has been attracting thrill-seeking tourists because of the prime viewpoint offered. In the video, the gathered holidaymakers are filmed excitedly watching as the Wizz Air aircraft approaches the landing strip.

The tourists can be seen ready for the landing with their tripods and cameras at the ready.

The jet is seen picking up dramatic speed as it lowers closer to the ground and hovers over the top of the crowd as tourists can be heard shouting over the roaring engines of the Wizz Air-operated Airbus A321.

As the plane skims over the crowd of tourists’ heads, a gust of air blows toward the crowd around, with one girl seemingly falling to the ground and a woman losing her hat.

Shortly after passing over the crowd, the clip shows the jet landing safely on the airport runway.

Because of the location of the runway, which is flanked by two hills, pilots routinely have to approach the tarmac at a very low altitude.

Because of the location of the runway, which is flanked by two hills, pilots routinely have to approach the tarmac at a very low altitude. 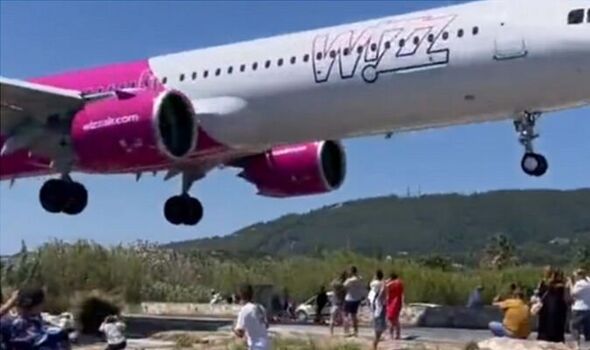 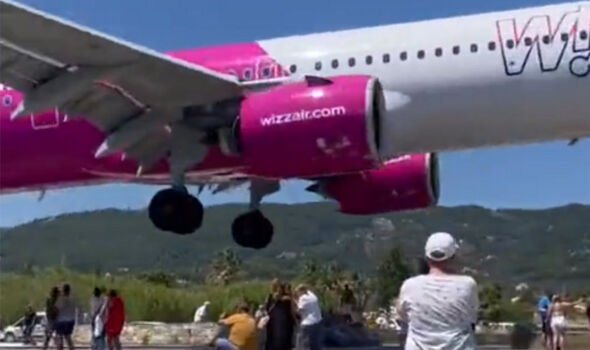 But the video sparked some criticism among social media users, who questioned the safety of tourists being allowed to stand so close to the airport while planes land.

User @Appleton_Bananas said: “That’s ridiculously unsafe. Look at this still…people are ducking on the bridge.”

@Batsuri said: “A few weeks ago a person was hurt and went to the hospital. She was standing and taking pictures at the exact same spot as these tourists.”

@ContinuousSafety said: “It’s quite low for an A321. The minimum threshold crossing high should be at least 50ft.”

@2ATgZHHehUklKjs said: “Is this supposed to be a good thing?”

@RoberBanks68 said: “Surprised it took off in the first place.” 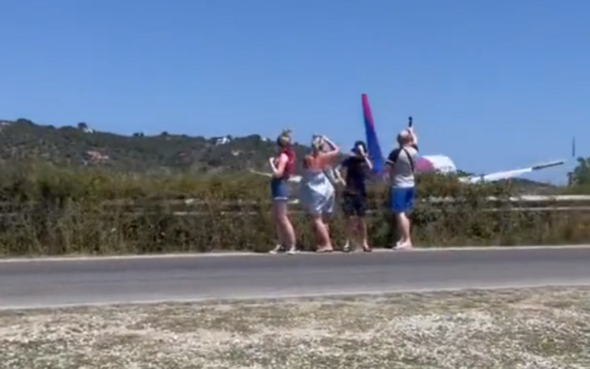 The budget airline announced just weeks ago that they would have to cancel a number of flights that were scheduled to depart from Gatwick over the summer, as it was one of many airlines affected by staff shortages.

Wizz Air said: “Given the current challenging operational environment in the travel industry, in particular with staff shortages within air traffic control and at airports, this decision also stabilises our operations at other UK bases to help minimise disruption and delay as much as possible.

‘For the love of God!’ Ferrari brutally shuts down caller blaming EU exit for shortages
Britain to face ‘exceptional’ wildfire risk as four day amber alert comes into force
Mum-of-eight who spent years indoors to stop people staring at her face dies at 47
Putin ally could launch nuclear strikes on THREE countries including EU nation in new plot
‘Not so normal!’ Biden ridiculed as US leader tries to shake hands with air – VIDEO