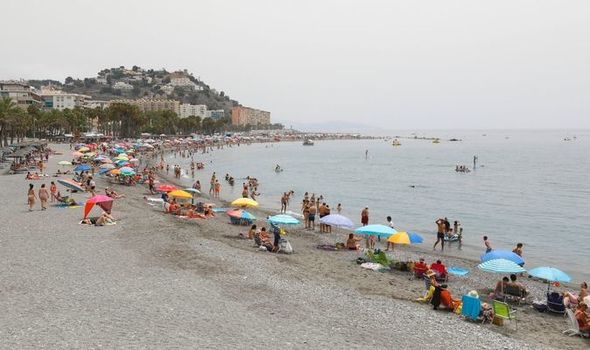 The dramatic YouTube video shows two-men head for the shore of Melicena in Granada before ramming into sunbathers and jumping off the boat. With the beach packed full of beachgoers, many ran for cover while others attempted to chase the men.

The incident occurred in the early evening yesterday, with hundreds of sunbathers soaking up the last of the sun.

The video shows the boat heading for shore at high-speed before hitting at least one person, knocking them over as the boat jammed into the shoreline.

Footage from the scene, which is understood to have been taken by people on the beach, captured the whole incident.

Multiple videos have since shared different angles from the horror moment which saw the men running in opposite directions.

“They are going to land here!”

Two men, both wearing white t-shirts, then jumped off the boat before attempting to run off through the crowded beach.

While one made his escape behind rocks, the second man was caught by several sunbathers who managed to tackle him and pin him down onto the sand.

The video shows about 15 people running towards the man to capture him.

Many beachgoers can be seen running off into the distance to search for the other man who had disappeared.

The police arrived shortly afterwards and arrested the man nearby.

The Spanish police uncovered numerous bales of cannabis under plastic sheets on the boat.

It was said to have weighed a huge 800 kilos, consisting of 25 bundles.

The two men were fleeing from a Civil Guard patrol who were pursuing the suspects at sea before spotting the boat off the coast of Granada.

Police later said that one of the people who had intervened with the situation was an off-duty police sergeant.

Clips from the video have since been shared across various social media platforms including both Twitter and TikTok.

Another said: “Heroic gesture from all the people on the beach.”

Drug runners attempting to hit the beaches in Spain with their illegal substances became more common before the coronavirus lockdown and Spanish police now fear it will happen more often.