Five-star playgrounds: From cuddles with a resident Shetland pony at The Goring to cookies and milk at The Savoy, top London hotels are rolling out the red carpet for children

The extremely kind head butler, Sean, lifts my seven-year-old daughter above the Lalique frieze counter in the hotel lobby so she can fill out a form on what time she would like cookies and milk that night.

He tries hard not to buckle as she writes carefully (and slowly).

As we are led past floral arrangements and polished wood panelling she beams, as everyone from the concierge through to the restaurant team knows her name. It feels magical, a seemingly choreographed whirl of staff and guests. 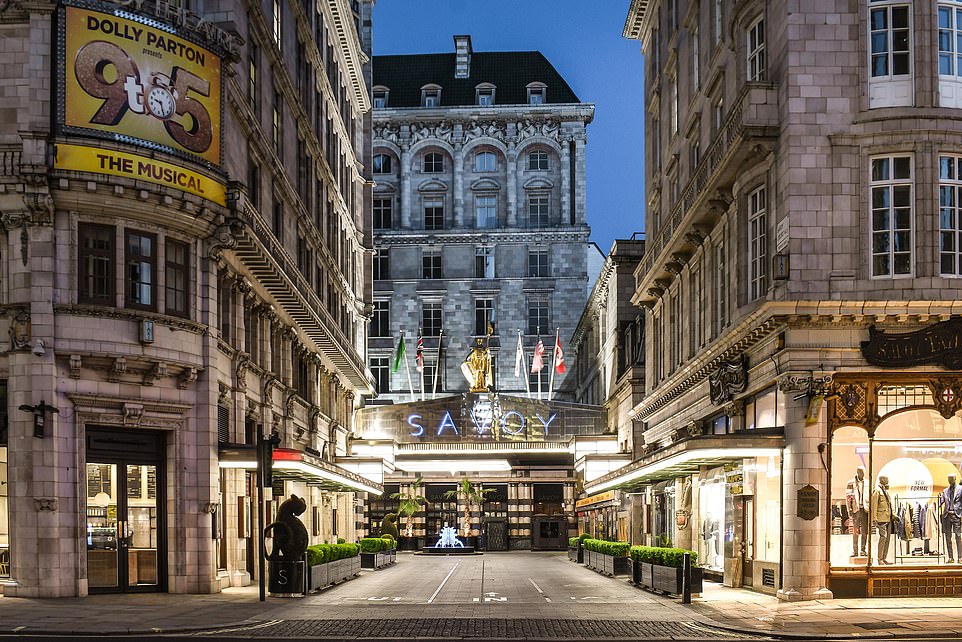 Due to the pandemic, the multi-generation, week-long villa holiday of old might this year be a three-day stay at The Savoy with grandparents 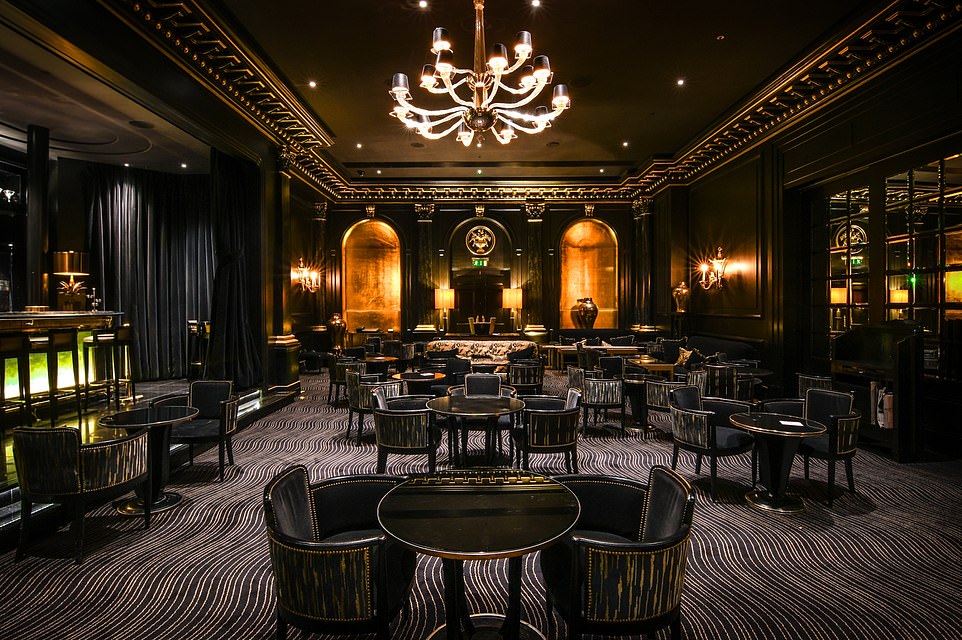 The interiors of The Savoy’s swanky Beaufort Bar, where the champagne cocktails are the stuff of legend

Treating a child as a VIP here comes as a surprise: The Savoy I know is the epitome of glamorous entertaining and dining, a five-star venue for glittering evening events, where Gordon Ramsay is at the helm in the Savoy Grill and champagne cocktails at the Beaufort Bar are the stuff of legend.

Yet Covid has been the mother of invention for some London hotels after the realisation that a trickle of business guests and overseas visitors would not be enough to keep their doors revolving. But families with long school holidays to fill? They just might.

These gleaming citadels of grown-up sophistication and indulgence are a treat for most adults, never mind their offspring. Still, the emotional impact of missed opportunities during the pandemic has led families to spend more this year on decadent bursts of fun to create lasting memories. The multi-generation, week-long villa holiday of old might this year be a three-day stay at The Savoy with grandparents.

At Solas, a pop-up alfresco dining area that has transformed The Savoy’s entrance, two families with teenage boys are chattering over the speciality here – seafood platters – and selfies ensue. 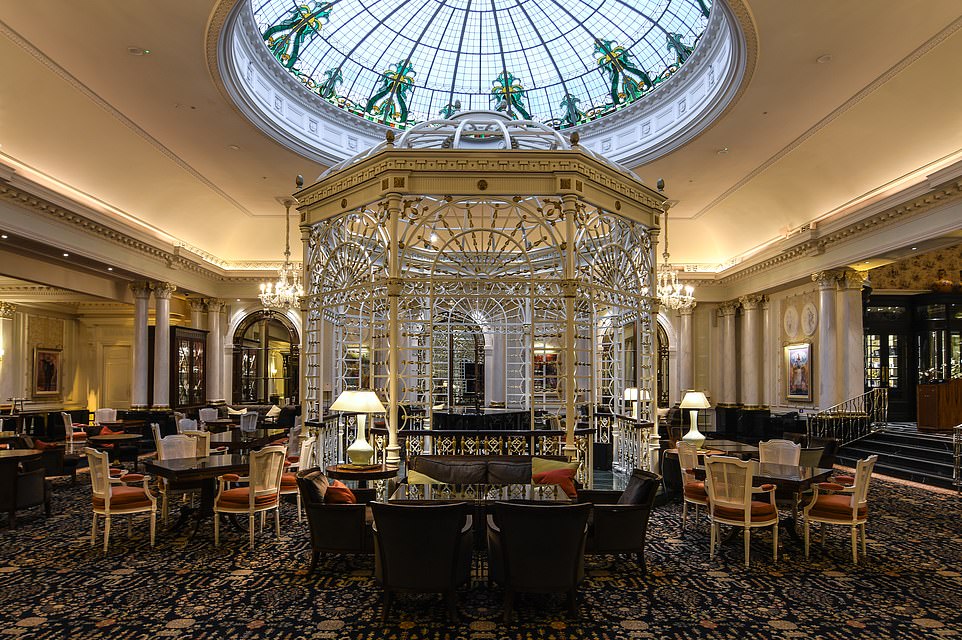 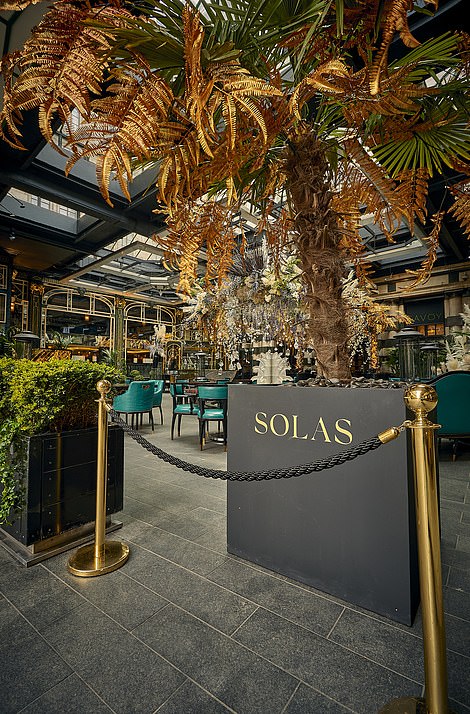 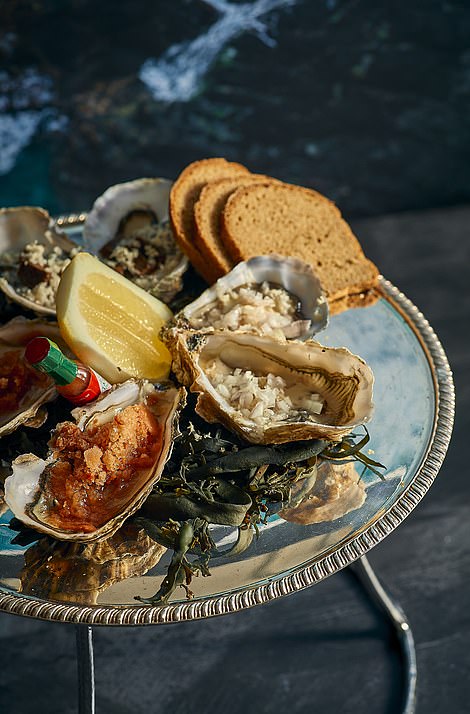 We take the Red Lift, London’s first electric elevator. It dates from 1889, is padded out in red leather, including its seat, and is affectionately known as the Ascending Room. There are 267 rooms – check in to 326 and, like us, you’ll unpack in the elegantly furnished Winston Churchill suite, where incredible views of the River Thames and Embankment are framed by majestic swags of curtain.

Yet it is soft, too, and comforting, with overstuffed sofa, writing desk and fireplace. But all eyes are on a book stand with carefully chosen titles for a seven-year-old. A chalk slate reads ‘Romilly’s Library’ and has two named balloons tied to it. ‘For me? How did they know?’ she squeals.

On a comfy windowside bed she finds a bag of goodies – a colouring book and pencils plus a perfect-size robe and Savoy monogrammed slippers. There’s also a box of fresh caramel popcorn and Savoy chocolate lollies (surely for the grown-ups?).

The real treasure, on her pillow, is a black fluffy toy cat, Kaspar, the Savoy mascot, who has been her bedfellow ever since. He is the creation of author Michael Morpurgo who wrote Kaspar, Prince Of Cats, after his tenure as writer-in-residence here in 2016. Morpurgo was charming, according to The Savoy’s own archivist, Susan Scott.

Later we gallop through a wonderful history with Susan, back to the Duchy of Lancaster owning the site in 1240. It was US theatre entrepreneur Richard D’Oyly Carte who brought the best of US modernity to London’s Edwardian theatreland and in 1889 opened The Savoy as the first purpose-built luxury hotel and the first public building in the world completely lit by electricity. Afternoon tea, booked in advance, can be taken from noon to 4pm in the Thames Foyer – a far more elegant space than it sounds.

Sarah Hartley was a guest of Fairmont Hotels. The Savoy has Superior rooms from £580 per night and Deluxe King with an additional rollaway bed from £705 per night. Afternoon tea is £65 per adult and £37.50 for children (thesavoylondon.com).

Children with aunts and a couple with three immaculately behaved little ones relish the chance to tuck into chocolate cake as a pianist plays softly. At the next table a man – not in his youth – proposes to his tea companion and she tries the ring on for size and is smitten. It is all very low-key and such fun.

That night we can’t bear to dine out – what could be more delicious for our daughter than spaghetti bolognese in a bathrobe, watching the sun set over the London Eye, then cuddling up with Kaspar to read Charlotte’s Web from her very own library? The boat-sized bath has its own Savoy Ahoy toy boat, while the monochrome bathroom comes with pleasing Art Deco touches and walk-in shower.

At breakfast, our daughter copies other children and orders chocolate pancakes – berries are a side order delivered with a wink by our waitress to throw in some vitamins.

After an Arnold Bennett omelette, fresh orange juice and strong coffee refills, I fear we may sink in the swimming pool. At the time, sessions had to be booked ahead and were only for your bubble. But to have 30 minutes splashing in private with my daughter is heaven.

We could have booked a week somewhere coastal with fresh air and walks, but I know we’ve hit the memory bank when she later asks a family friend: ‘Do you know The Savoy? It’s wonderful. They give you a cat to take home too.’

Fancy feasts and their own concierge! 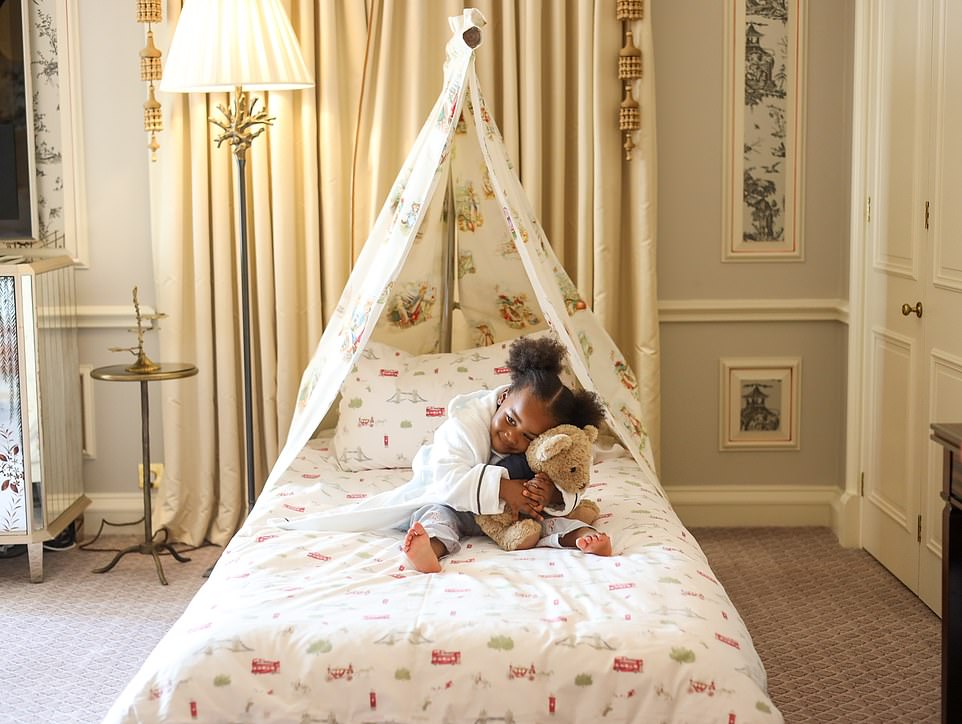 Little ones at The Dorchester can get their own bathrobes, teddy bears and pint-sized beds 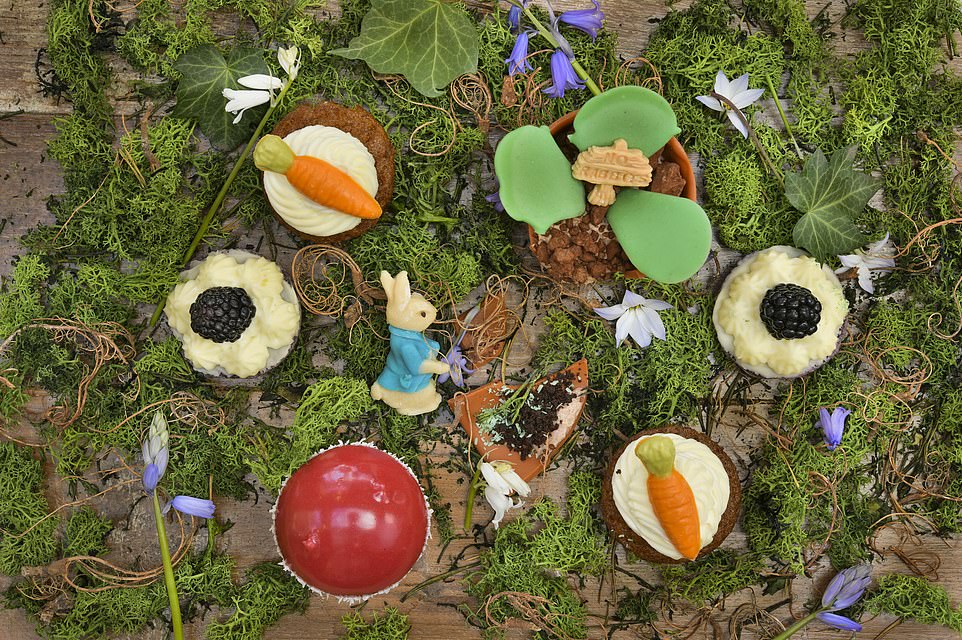 It’s fantasy time for families checking in to luxury London hotels as itineraries have been cranked up to full-force fun.

Little ones at The Dorchester can get booked in for a car ride to Buckingham Palace in a classic Rolls-Royce, or they can whip up a treat or two during a cooking class in the hotel’s kitchens.

Children’s tea is a ‘fanciful feast’ with milkshakes, sandwiches, cakes and sprinkles aplenty.

A Superior King Room plus adjoining room, B&B for two adults and two children costs from £815 a night, or suites from £2,770 (dorchestercollection.com).

Over at The Dilly on Piccadilly, with a £60 family travel card for each night of your stay, watch your child become a Dilly Explorer with maps to guide them (with your help) to attractions such as the Natural History Museum and Hamleys. 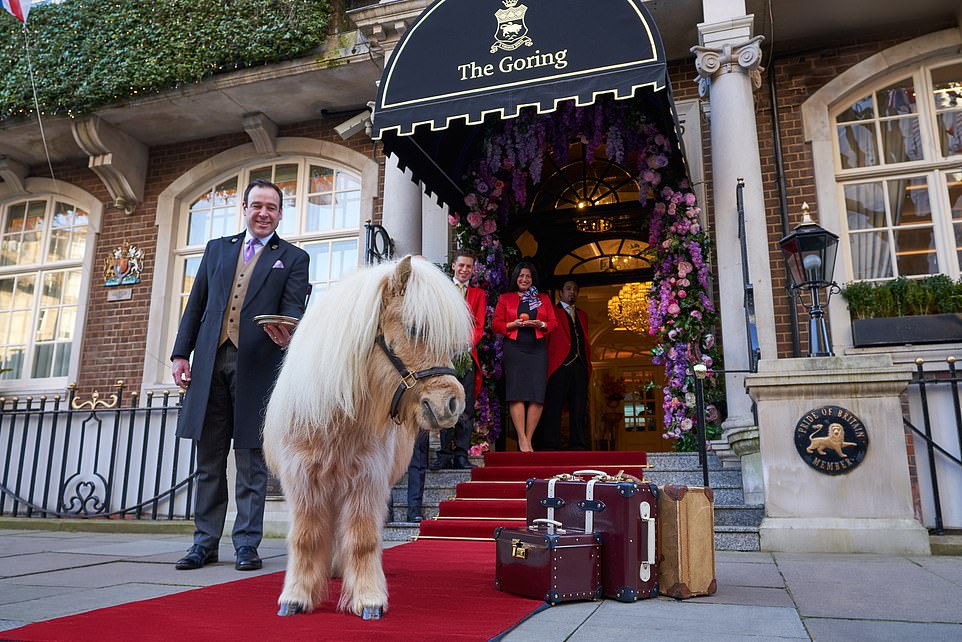 Your children can meet Teddy the Shetland pony at The Goring 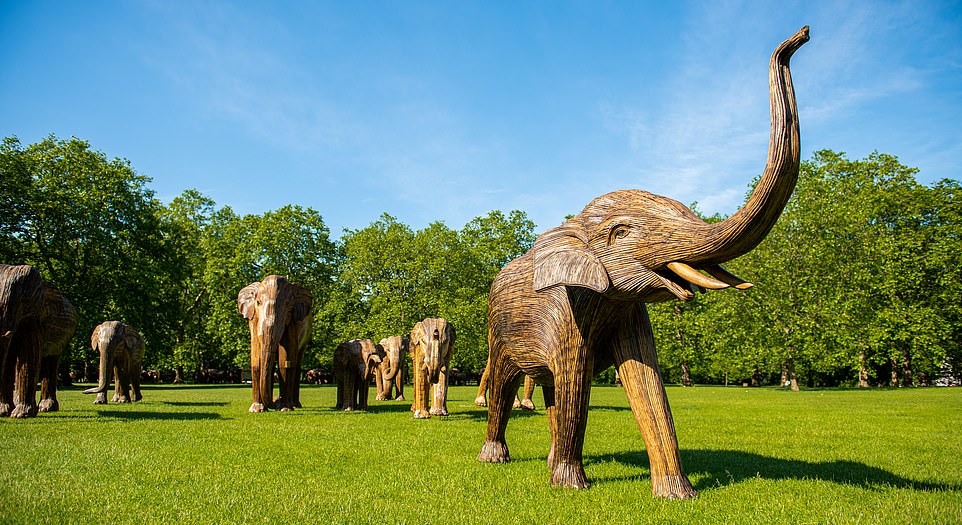 Big treats: An exhibition of lifesize wooden elephants in the Royal Parks near some of London’s most exclusive luxury hotels 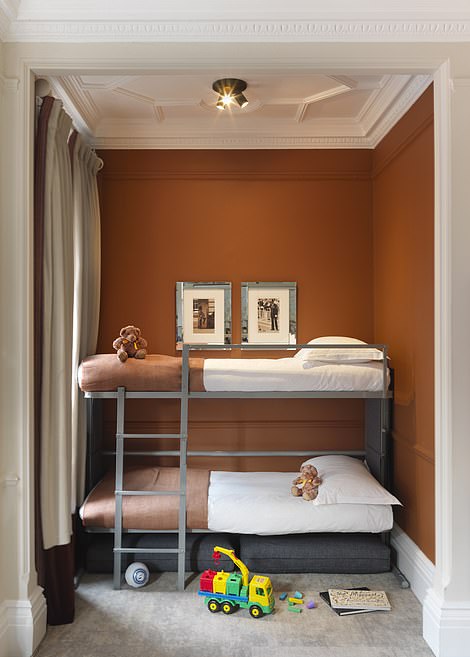 There are connecting family rooms at the Athenaeum

Peter Rabbit afternoon tea will have your little ones nibbling on themed sweet treats.

Under-12s eat free in the restaurant and it’s a pet-friendly hotel. B&B for two adults and two children in a Dilly Family Room is from £499 a night (thedillylondon.com).

Kids will adore Teddy the Shetland pony, who is checking in for a ‘stablecation’ at The Goring in August. They will find him roaming free in the walled garden and can enjoy a pony-themed afternoon tea before cuddles with Teddy.

Talking of roaming free, make time for your children to experience the majestic lifesize elephant sculptures that are touring London’s Royal Parks as part of a campaign to highlight our coexistence with wildlife (coexistence.org).

Families come first at the Athenaeum in Mayfair with a Children’s Concierge to keep your little ones happy – whether it is delving into the hotel Toy Store or taking bikes into Green Park. Family rooms with connecting rooms cost from £600 per night (athenaeumhotel.com).