Constructed during the Industrial Revolution by cotton mill owners John and Robert Lord, Barrow Bridge was once a model community village for around 1,000. Today, the village is slightly bigger, but the tranquility of the past still remains: nestled within the Smithills Estate, the largest Woodland Trust site in England, trees line the streets, wild flowers grow on the shores of the river, and a waterfall gurgles near the quaint bridge that gave the village its name.

According to its residents, Barrow Bridge is the ideal place to visit for a few days of relaxation, especially as tourists and locals alike have no choice but to keep phone and internet usage to a minimal.

Although this would mean a welcoming break from their busy lives for some holidaymakers, it can be a problem for those who live in Barrow Bridge permanently.

Jack Halliwell lives with his family in the village, and despite feeling lucky that he has grown up so close to nature, the 22-year-old said the phone signal is a nuisance.

He told Manchester Evening News: “I like the surroundings, they’re good. That’s the main reason why people come here. 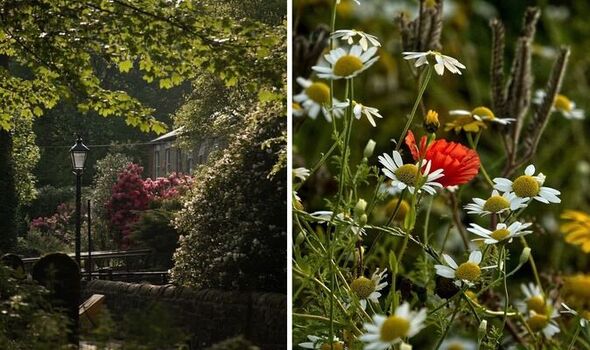 “It’s a good place to go to walk the dog. It’s only recently over the last three to four years that it’s got popular.

“There’s more going on, the Woodland Trust has been building stuff and putting boards up encouraging people to come.

“I would probably prefer it if it was quiet but it’s not always on my mind. When we had the heatwave, it was really busy. Before the road shut, loads of cars would come on the weekend.

“We have no phone signal – my brother wrote to my local MP about it. It only picks up around the park, occasionally you get lucky if you go to the top of the garden.

“It’s bad because if you’re at home for a few days no one can get in touch with you.”

Rebecca Schoular and her family said they had considered moving from the area due to various reasons, including the lack of signal, but they were afraid they wouldn’t find anywhere as beautiful as Barrow Bridge.

“We’re struggling to consider moving because there’s nothing like it when you come out of your front door,” Rebecca explained.

“It’s ideal for having dogs, we’ve also got a young son as well so he has a park on his doorstep. It’s just very peaceful for the most part – obviously we have the roadworks that are going on.”

Rebecca went on to say how the neighbours have also kept her in the area. She said: “Since Covid, we’ve all become really good friends. We all tend to congregate at each other’s houses which is nice.

“We’re noticing more visitors, mainly because of all the roadworks that are going on. It’s more noticeable because people haven’t meant to be pushing past the signs but they are.

“You get your walker and horse rider, that’s all nice. It only tends to be busy on weekends or holidays.

“I’ve got a beautiful picture on my phone of when we had eight deer in our garden. You get plenty of wildlife too.”

Jim Taylor, 90, who has lived in Barrow Bridge his entire life, also commented on the village’s tranquility.

He said: “It’s very quiet and very peaceful. Where the road takes you is wide open. There’s moorland and a valley there.”

Another resident described Barrow Bridge as idyllic, but noted how the increasing number of visitors have changed things.

“People would have picnics and camp in the woods behind but never take stuff down,” she said.

“After a long Bank Holiday, it was absolutely cluttered down there with paper and things they left.

“They take a bag of food, why can’t they put it back in a bag? I’Il never understand it.

“We’ve always had tourism. It’s a nice place to live – when you live here, you get used to it. You get the odd biker trying to do wheelies on top of the bank.”