Exploring Norwegian Cruise Line’s newest ship and her incredible features on an exclusive shipyard tour, from the 10-deck slide to the 40mph go-kart track

The first thing that hits you when Norwegian Prima comes into view is the swirling blue patterns on the hull, which when completed, will span the full length of the ship – almost 300 metres (984ft) – from prow to stern.

Despite appearances, the newest ship in Norwegian Cruise Line’s fleet of 17 is in the final stages of construction in the Fincantieri shipyard near Venice. And with its maiden voyage, from Amsterdam to Reykjavik in just 11 weeks’ time, the vessel is a hive of activity, buzzing with 2,300 workers.

On a hard-hat tour inside, it feels like an obstacle course, stepping over cables, under dangling wires and round wet plaster, all to the tune of hammering, drilling and sawing with sparks flying. The lifts are not in action yet, so it is a great cardio workout trotting up the stairs of the 20-deck ship. 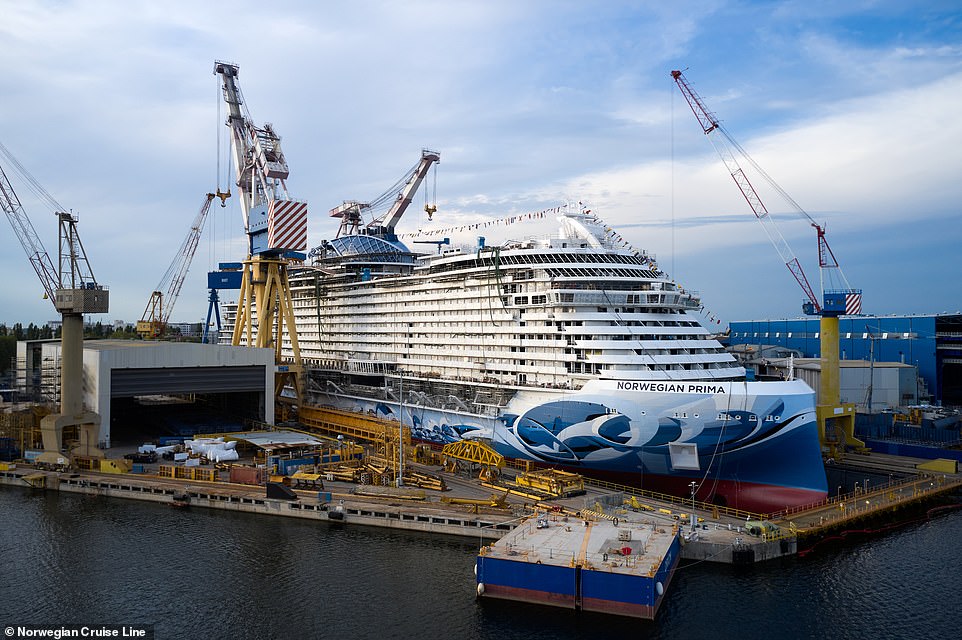 Caroline Hendrie gets a tour of Norwegian Prima, pictured, in the Fincantieri shipyard near Venice ahead of her maiden voyage this autumn

Norwegian Prima, which will be christened by pop star Katy Perry in Reykjavik in August, is the first in a new class of ship (Norwegian Viva will be launched next year), and it is a surprise in these days of launching bigger and bigger ships, that this one, for a maximum of 3,215 passengers, will be smaller than the last ship for NCL (Norwegian Encore in 2019, which could hold 3,998 people), yet with 26,000 square metres (279,861 sq ft) of public areas, will feel the most spacious.

Simone Clarke of Iglu Cruise specialist agency, who was on the shipyard tour, is very impressed: ‘Significantly fewer guests onboard mean much more space per guest. There will also be more crew, so service levels will be high, offering a more premium, quality experience.’

Among the luxuries of space promised are bigger bathrooms with roomy showers for all, the largest three-bedroom suites at sea and the most outdoor deck space on any new cruise ship, including two Oceanwalk glass bridges offering the giddy experience of walking over the waves dashing far below. 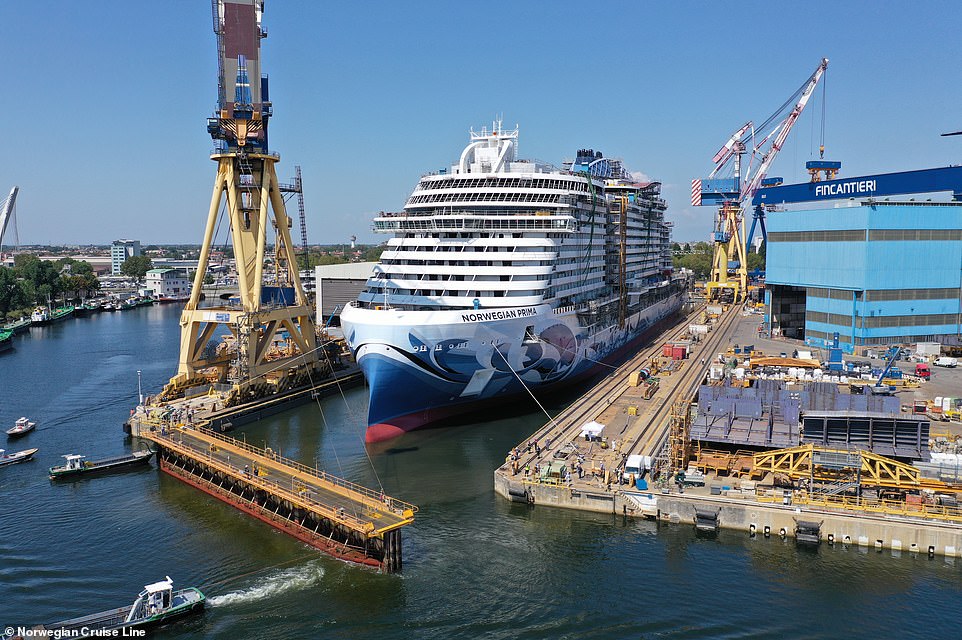 ‘The vessel is a hive of activity, buzzing with 2,300 workers,’ says Caroline, as she explores the ship’s interior 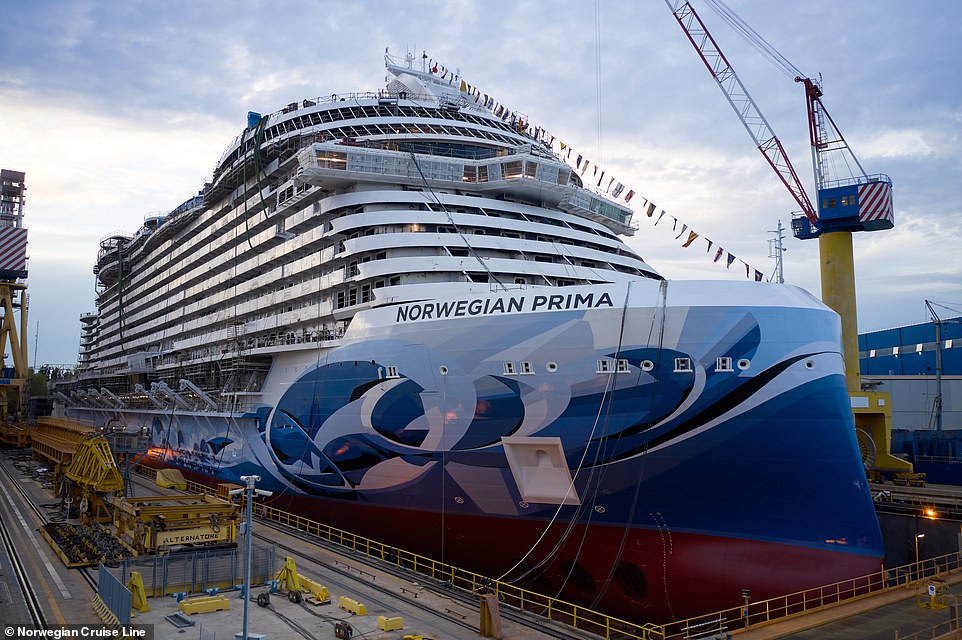 Caroline writes: ‘The first thing that hits you when Norwegian Prima comes into view is the swirling blue patterns on the hull’ 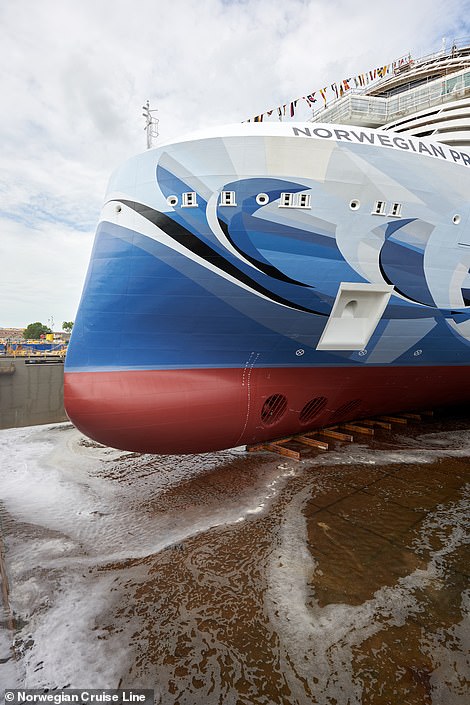 The ship’s hull design is the work of Italian graffiti artist Manuel Di Rita, who has drawn his inspiration ‘from his love of the Lagoon and the sea’

Wide and long Ocean Boulevard, wrapping round Deck Eight is where you will find Infinity Beach with pools to swim toward the horizon in and The Concourse, a sculpture garden that will be the place for selfies as the setting sun glints on the six metal pieces specially created by American artist Alexander Krivosheiw whose work has adorned the collections of David Bowie and Usain Bolt.

This is just part of the 700-piece, $600million (£485 million) art collection on board that also includes the hull design by Italian graffiti artist Manuel Di Rita whose fans know him as Peeta. He tells us he has drawn his inspiration from his love of the Lagoon and the sea.

Standing in the circle of the theatre it is easy to imagine most of the 3,000km (1,864 miles) of cables being laid must be under the stalls. At the flick of a switch or two, in 30 minutes the seats will magically disappear and be replaced by a dance floor to turn the space into a huge nightclub to rival Las Vegas. Stand-out shows scheduled for the theatre are a full production of Summer: The Donna Summer Musical and high-octane tap-dancing and beatboxing by Noise Boys.

Lots of the 20 or so places to eat will have indoor and outdoor seating, including new Indulge Food Hall made up of 11 food stations including Nudls, whipping up noodle dishes from every corner of the globe; Tamara, serving Indian food; a Seaside Rotisserie, and a Tapas Food Truck offering its own take on Spanish cuisine. 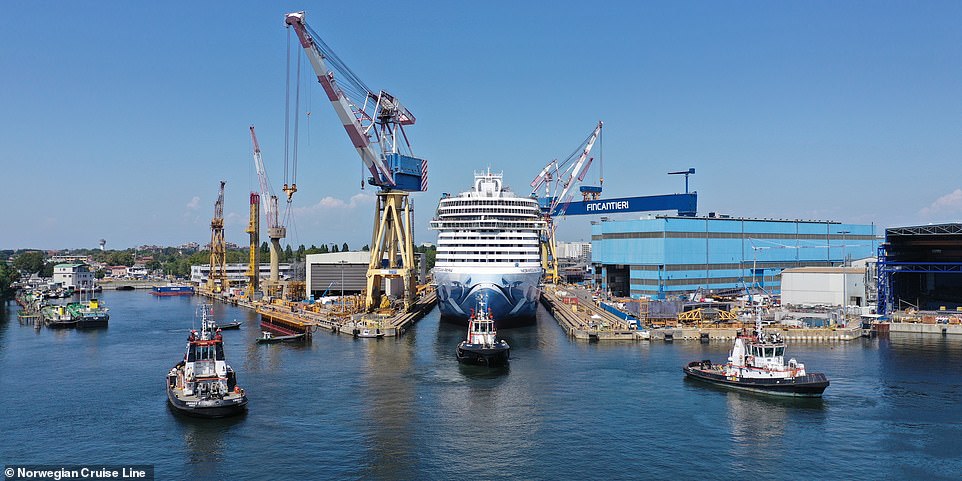 Norwegian Prima, carrying a maximum of 3,215 passengers, will be smaller than the last ship for Norwegian Cruise Line, yet with 26,000 square metres (279,861 sq ft) of public areas, will feel like the most spacious

All of these options are included in the fare but Coco’s elaborate deserts – yuzu and white chocolate dome, anyone? – and Starbucks coffee will cost extra.

Dining at new speciality restaurants such as Mediterranean-style Palomar, which will serve fresh seafood, and Hisaki Japanese grill will also come at an extra charge.

NCL has found that with so many options for meals very few people eat in the main dining rooms more than a couple of times a cruise nowadays. It has therefore taken the bold step of doing away with traditional restaurants with menus changing every day (such as Savor and Taste aboard Norwegian Encore) and created Hudson’s, with a fixed menu of international dishes such as shrimp arancini, Greek salad bruschetta and burgers with 270-degree ocean views. 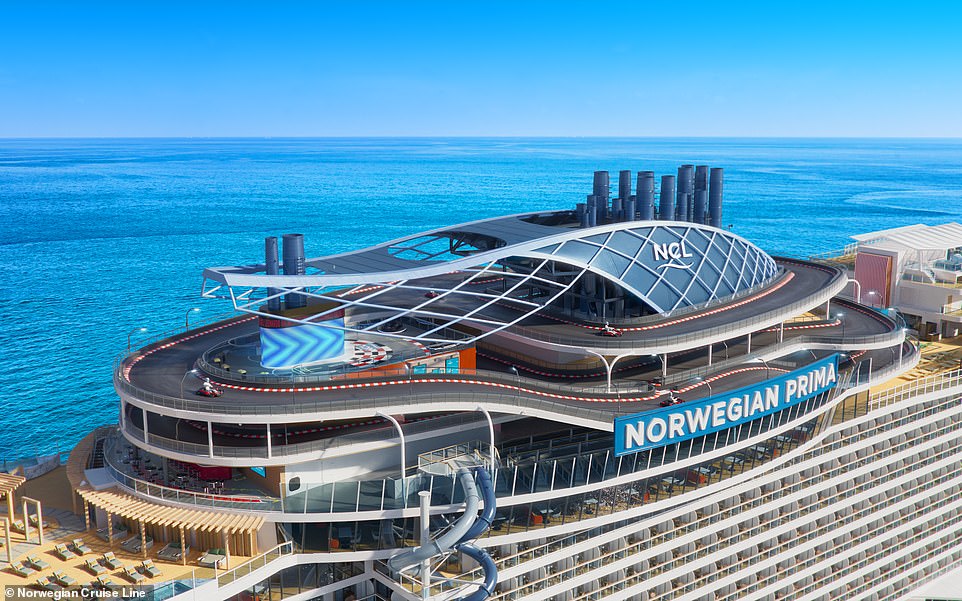 The above rendering shows the ship’s Speedway (centre), on which you can race go-karts at speeds of up to 40mph (64kmph) 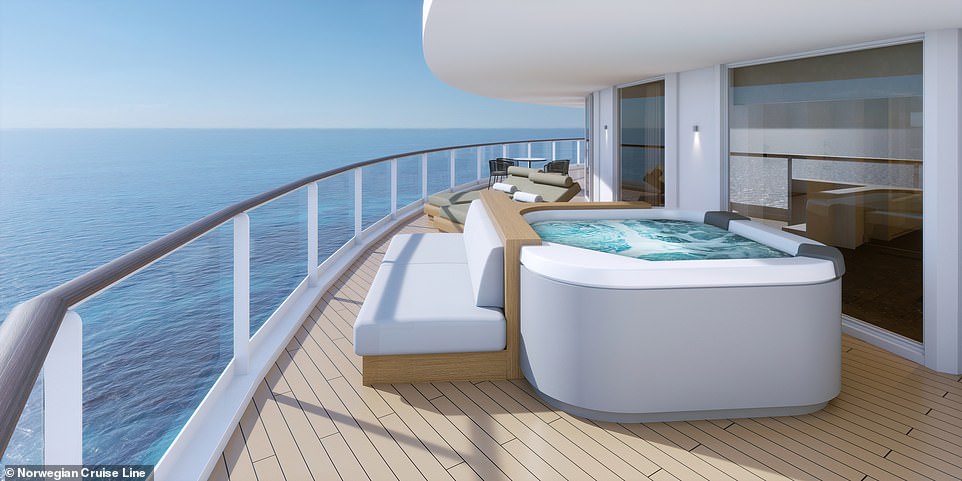 The Haven is an exclusive, key-card accessed enclave of 107 luxury cabins with their own restaurant, lounges, sundeck, outdoor spa and pool, all reached by private lifts. The above rendering shows a hot tub on the balcony of one of the cabins 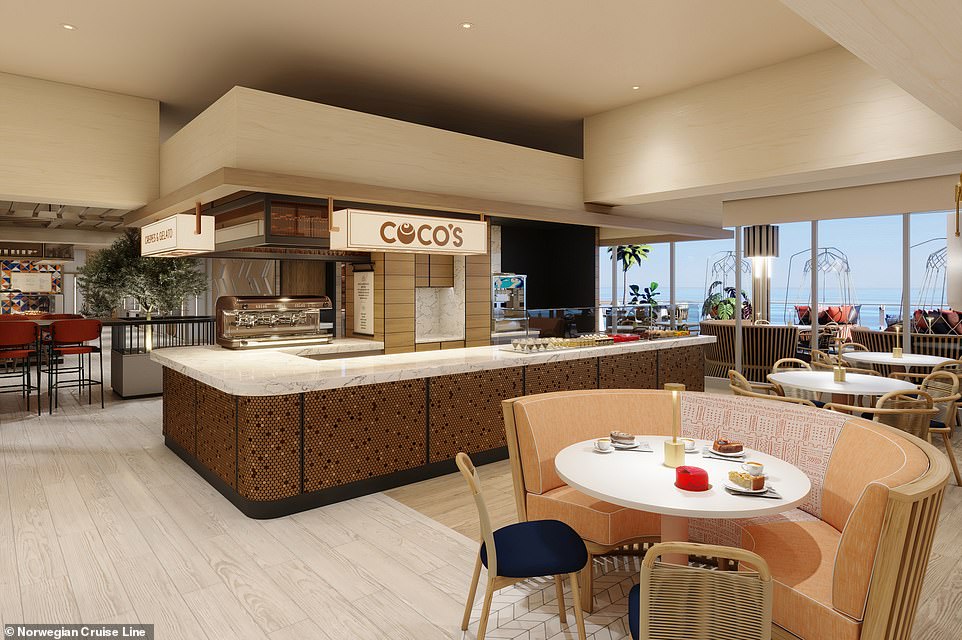 Thrill-seekers should think twice before over-ordering though. The Drop is a dry slide to send you on a heart-busting ten-deck plunge. And the Rush is twin, stomach-churning slides for racing your friends from the top of the ship to Ocean Boulevard.

On the Speedway you can race go-karts up and down and round the corners of a three-deck track at up to 40mph (64kmph) and relive the experience by watching your performance on a screen in the adjacent bar.

The perfect retreat from the hurly-burly of so much family-frenzy fun is the Haven, an exclusive, key-card accessed enclave of 107 luxury cabins with their own restaurant, lounges, sundeck, outdoor spa and pool, all reached by private lifts.

The Haven is already a feature on other NCL ships but on Prima, of course, it will be the biggest and the best.

Norwegian Prima will sail in Northern Europe this autumn and in the Caribbean in winter 2022/23. A 10-day cruise from Copenhagen to London sailing on September 13 starts at £2,256pp. One-week winter sun Caribbean cruises, round trip from Port Canaveral in Florida, start at £1,181pp. Flights are extra. To book go to ncl.com.