Where in the wolds will you go? It’s not just the Cotswolds – England has many more stunningly beautiful areas of hill country to discover

Let’s tackle the science first. To a geographer, a wold is a hill that’s on a base of limestone or chalk. To the rest of us, though, wolds are the epitome of the English countryside – understated and beautifully rural, dotted with small villages and market towns surrounded by rich farmland and reed-fringed streams.

The Cotswolds are one of the UK’s prime tourist attractions, but there are other, lesser-known wolds that are truly worth exploring. They all have historic towns, places offering fine food and grand houses to visit, but heading into these wolds is about diving into nature and leaving the tourist trail.

With gentle hills and wide valleys, this is wonderful walking country where you’ll want to pause to appreciate the view – and not just because you’re out of puff after a punishing climb. 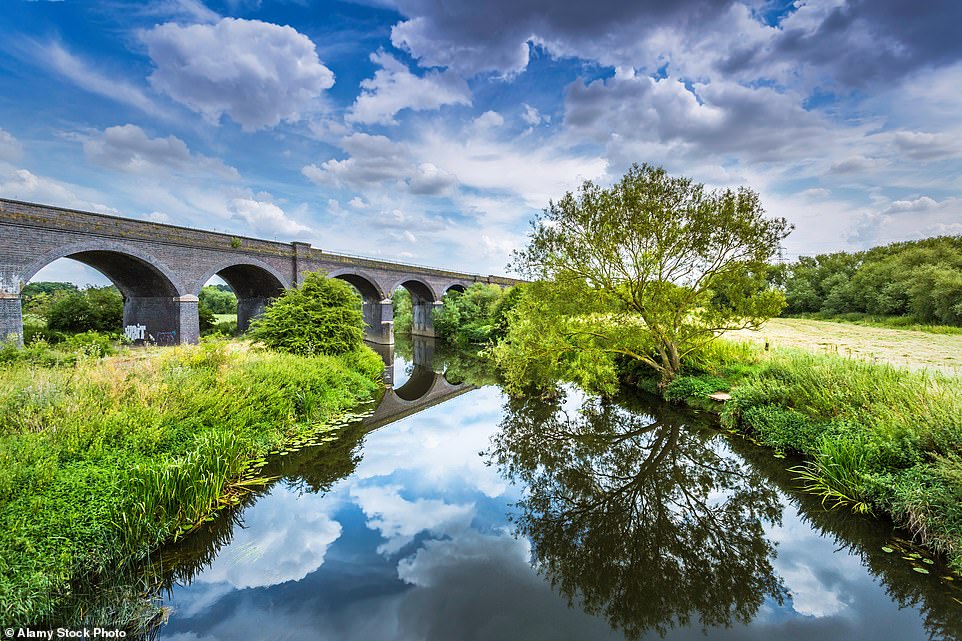 Winding down: A viaduct above the meandering River Soar at Stanford on Soar 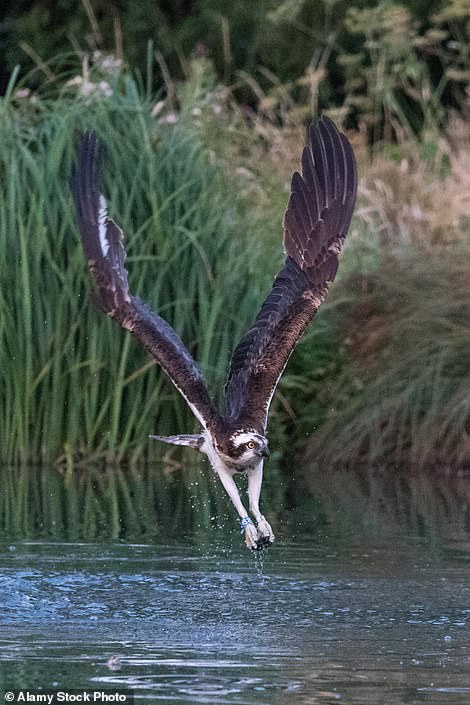 An osprey in the birdwatchers’ haven of Rutland Water

Nottinghamshire, Leicestershire and Rutland: The English wolds are at their wettest here as they dip in and out of three counties, with the River Soar gently meandering away from Leicester and the Trent and Wreake rivers also circling the region.

Pack binoculars for Rutland Water (anglianwaterparks.co.uk), which was made by controversially flooding villages in the 1970s but is idyllic now. This major wetland area draws birdwatchers in their droves, to see ospreys diving into the water for fish in summer, kingfishers and dragonflies. The circular walk is 24 miles, but there are shorter strolls as well.

Visitors can stop off in gorgeous villages nearby; beamed, thatched and very well cared for. Some of the pubs are doing takeaways until they can fully reopen. Don’t miss out on the takeaway Sunday roast at the particularly lovely Blue Ball in Braunston, with views of the church across the village green (theblueballbraunston.co.uk).

There’s also Barnsdale Gardens, the life work of the BBC Gardeners’ World presenter Geoff Hamilton. This eight-acre site has a never-ending series of different gardens, awash with roses, vegetables and fruit, along with a tea room and nursery (barnsdalegardens.co.uk).

On its own peninsula within Rutland Water, Hambleton Hall has had a Michelin-starred restaurant since 1982. A Victorian mansion without any of the stuffiness of the era, it’s both friendly and foodie and very, very popular. B&B doubles from £295 a night. (prideofbritainhotels.com).

When Tim Hart, the hotel’s owner, couldn’t find bread that he deemed good enough, he opened his own bakery, Hambleton Bakery, and there’s a branch in Oakham, Rutland’s most enticing market town. The Rutland Pippin, a pasty with apple, ham and stilton, has cult status here. You can stock up for a picnic in Waltham on the Wolds at The Waltham Deli, which is open for takeaways at the moment.

Beauty spots don’t get much better than the Vale of Belvoir. Its name means ‘beautiful view’ and it’s dominated by the equally striking Belvoir Castle (belvoircastle.com). Still lived in by the Duke and Duchess of Rutland – who produce their own gin – in normal times it’s packed with activities, including a fireworks festival and open-air cinema in the summer.

You can stay at the castle – often used as a film location, including for Netflix hit The Crown – and there are holiday cottages on the estate, plus a campsite.

Also near Melton Mowbray (home to delicious pork pies and plenty of places to eat them), Stapleford Park is very nearly as grand as Belvoir Castle. A 16th Century wedding-cake mansion, it’s been a luxury, family-minded hotel since the 1980s. Packed with paintings and antiques, the parkland, designed by Capability Brown, now also offers a golf course, tennis courts and bike trails. There are both rooms and cottages. B&B doubles cost from £175 a night (staplefordpark.com).

For something a bit different, Knotting Hill Barn House is a party-minded but prairie-like cabin in the middle of farmland. Sleeping eight, there’s wild swimming on your doorstep, a pizza oven and a wood-fired hot tub. From £1,680 for a four-night break (canopyandstars.co.uk).

Walk off cheese and cakes on a 147-mile trek 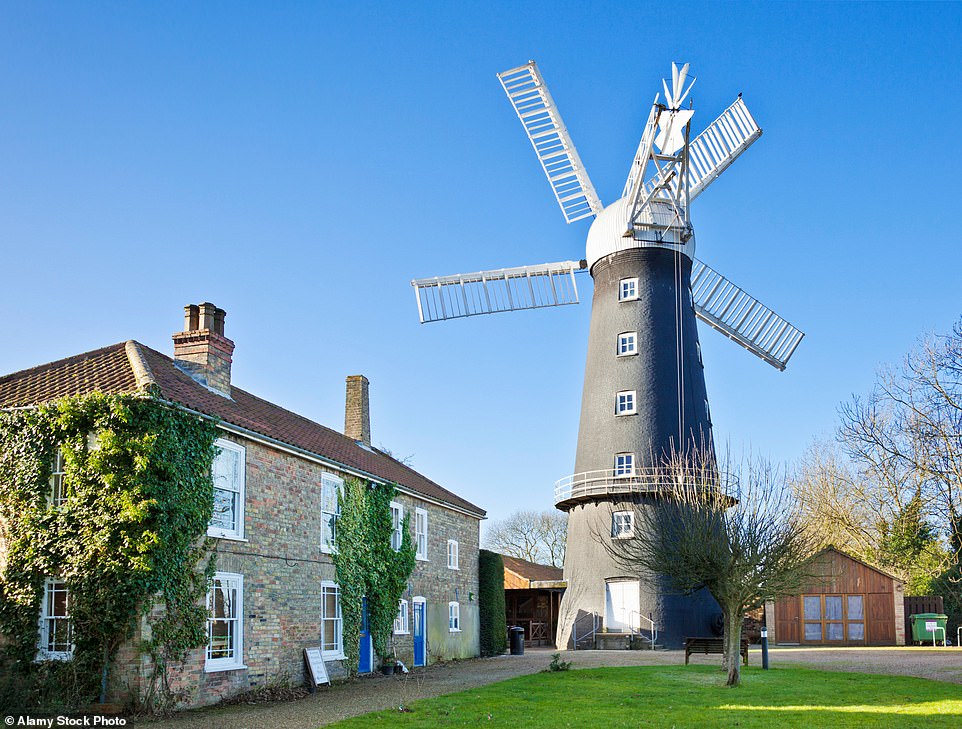 Flour power: The rare windmill with five sails in Alford, Lincolnshire, has been fully restored to working order 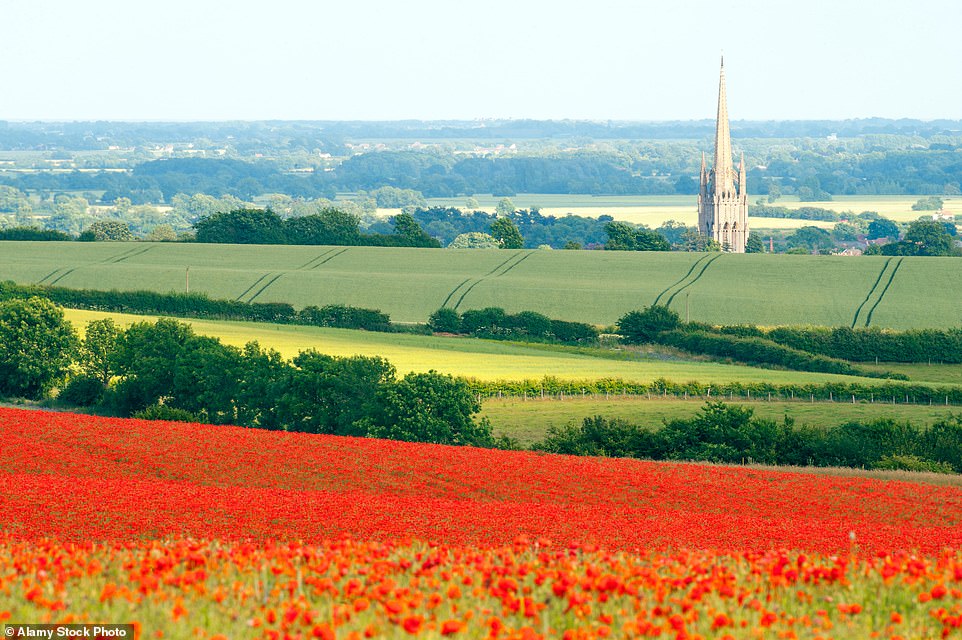 On a roll: A panorama of undulating fields outside Louth in the Lincolnshire Wolds

Lincolnshire: To the east of Lincoln the land begins to rise into the undulating chalk wolds, where a roaring wool trade gave the shire medieval prosperity.

The highest point of Normanby le Wold may be only 550ft above sea level, but when you look down you’ll see a series of furrows and gently folding landscape that’s been designated an Area of Outstanding Natural Beauty. It’s a favourite destination among cyclists as deserted lanes and canal paths take you past old churches, farmland and small villages.

You’ll also find stately homes, including the National Trust’s Gunby Hall (nationaltrust.org.uk), former home of the eccentric Massingberd family, from ‘Naughty’ Algernon, who got lost on the Amazon in 1885, to suffragette Emily, who married one cousin while having an affair with another.

The elegant market town of Louth has a pretty church spire and a delightfully measured attitude towards modernisation.

The Eve & Ranshaw department store has dominated the market place since 1781, while The Cheese Shop on Eastgate showcases the best local cheeses (including the acclaimed Lincolnshire Poacher) alongside its chutney and cakes. The Masons Arms in a sturdy Victorian building is a gastropub with B&B double rooms from £70 a night (the-masons-arms.com).

For walkers, the 147-mile Viking Way runs through the wolds, and highlights include Somersby, birthplace of the poet Alfred, Lord Tennyson, and the pretty village of Tetford. Alford has a rare thatched manor house (alfordmanorhouse.co.uk) and a five-sailed windmill.

At Claythorpe Water Mill there’s a cottage to rent and a gentle, Victorian ambience to soak up (claythorpewatermill.com). Like everything in the Lincolnshire wolds, it doesn’t shout about itself, but it knows how to delight.

At East Barkwith, the Grange has been in the same family for five generations and now offers B&B in its Georgian farmhouse. There’s a farmhouse trail and lake fishing available. B&B doubles from £82 a night (sawdays.co.uk).

There are also some stellar holiday lets around here.

Thorganby Hall has beautifully converted farm buildings, from two-bedroom Little Walk Cottage to the seven-bedroom Marris Barn (thorganbyhall.co.uk). Near Louth, Brackenborough Hall Coach House, stylishly converted from a stable block, is part of an 800-acre farm. Guests can help themselves to fruit and vegetables from the farm (brackenboroughhall.com).

Isolated gems that will send you back in time 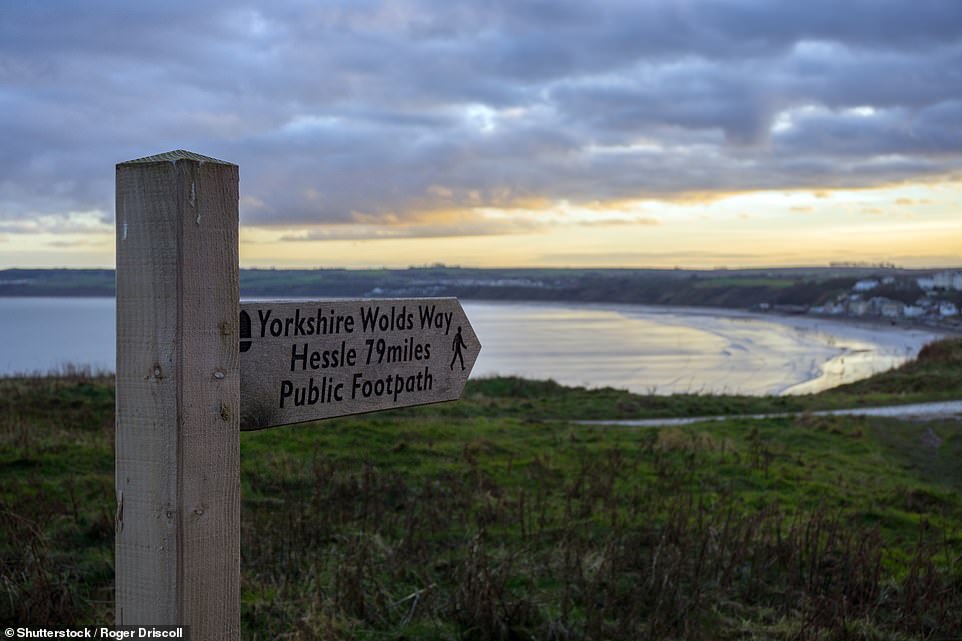 Wonders of the wolds: The heart of the Yorkshire Wolds is the 79-mile walking trail – dip in and out of it and uncover a series of gems

Yorkshire: In East Yorkshire, running from Hessle, near the Humber estuary, then rising to the east of York, the Yorkshire Wolds end at the cliffs at Flamborough Head. Their heart, though, is the 79-mile Yorkshire Wolds Way walking trail.

Dip in and out of it and you’ll uncover a series of gems. There’s the deserted medieval village of Wharram Percy, then Huggate, the highest village in the wolds, and Millington Wood, made up of ancient ash with carpets of bluebells, giant bellflowers and wild garlic. You’ll sense a back-in-time quality here – the village of Thixendale, in its own little dale, didn’t get television reception until 1997.

But it’s also in the avant-garde. The artist David Hockney had a home near the coastal town of Bridlington and has painted dozens of landscapes here. A self-guided walk available on visithullandeastyorkshire.com will take you to many of the locations, including Warter, where he painted a collection of 50 canvases of trees, and Woldgate.

Sledmere House, owned by the Sykes family for more than 400 years, is surrounded by glorious gardens designed by Capability Brown (sledmerehouse.com). The classic Wolds town of Beverley is a complete beauty. The delicate spire of the 13th Century minster looks out over meadows and there’s a medieval town centre that’s now studded with smart restaurants, boutiques and delis, plus a proper Saturday market. The Michelin-starred The Pipe And Glass (pipeandglass.co.uk) is a former coaching inn in nearby South Dalton with five luxury boutique suites. B&B doubles from £200 a night.

Also nearby, Tickton Grange (sawdays.co.uk), now owned by a second generation of hoteliers, has Georgian grace, 21 rooms, acclaimed food and a supremely well-stocked bar. B&B doubles from £150 a night.

To embed yourself further, there’s a choice selection of holiday lets available. Broadgate Farm Cottages, just outside Beverley, has won numerous awards. Light and stylish, they are also suitable for those with limited mobility (broadgatefarmcottages.co.uk).

The market town of Malton, home of the spectacular Castle Howard, also has a strong foodie reputation, as well as influxes of farmers for regular livestock auction. Amid the lifestyle shops and markets, Leoni’s serves some of Yorkshire’s best coffee and cakes. The Old Lodge is a 17th Century mansion set in parkland with 28 bedrooms. Doubles from £78 a night, including breakfast (theoldlodgemalton.co.uk). 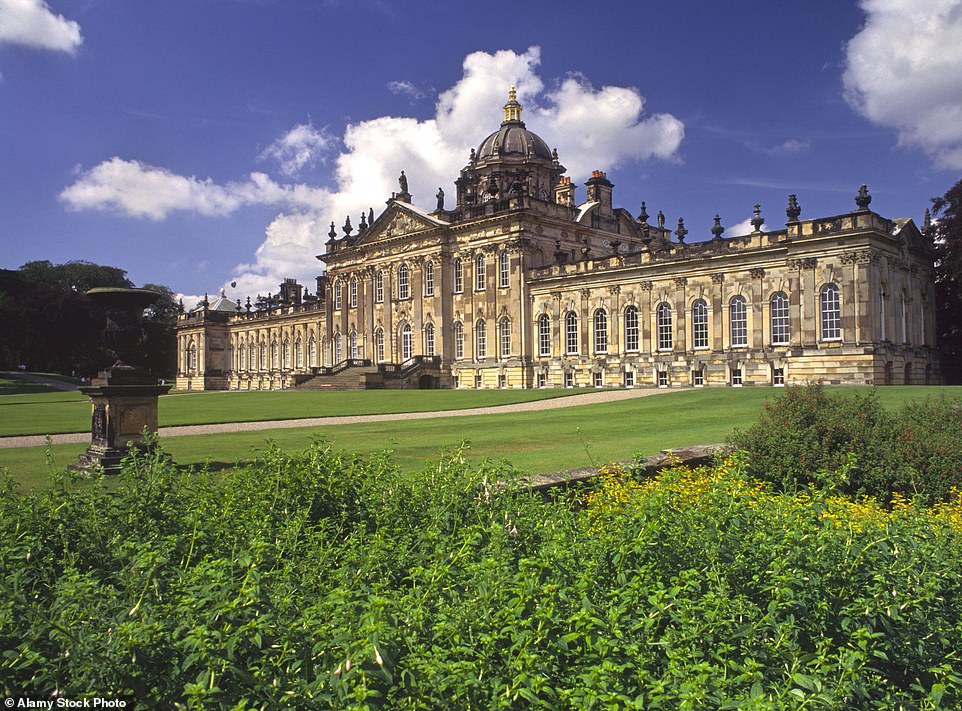