Not every cabin in the wood is the stuff of horror films, as a beautiful new coffee table book reveals.

How To Get Away: Cabins, Cottages, Dachas and the Design of Retreat, by Laura May Todd and published by Lannoo, sheds light on the world’s most spectacular ‘escapes’, from cabins in the woods to chic coastal cottages.

The escapist spaces that feature in the book include an artistic property built into a mountain in Lebanon, a 1960s haven on New York’s Fire Island, and an off-the-grid retreat just outside Marrakech, Morocco. Todd interviews the owners and designers behind each property, guiding readers on a tour through these unique homes.

The author says ‘there is room for flights of fancy’ in designing a retreat, offering the chance ‘to explore less conventional ways of living that wouldn’t fly in the day-to-day’.

She writes: ‘Whether your idea of retreat is a mud-walled hut in the desert or, like me, a simple cabin in the forest, each designer, artist or homeowner has something in common: once planted, the desire to escape is, put simply, inescapable.’ 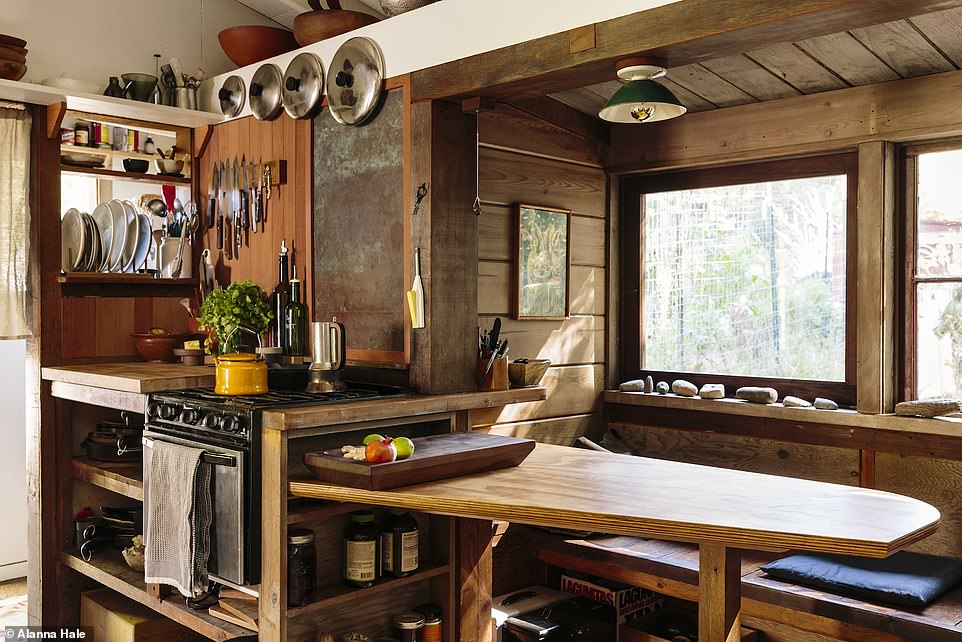 INVERNESS, CALIFORNIA: Pictured is a forest cabin built ‘from scratch’ in the 1980s by woodworker and sculptor Ido Yoshimoto. ‘Following in the footsteps of his godfather, the renowned sculptor JB Blunk, and artist father, Rick Yoshimoto, he has settled in a wild stretch of land at the end of a long dirt road within a verdant natural reserve,’ Todd writes. Yoshimoto tells the author: ‘When I took over, the building was uninhabited for many years and the forest had encroached onto the property’ 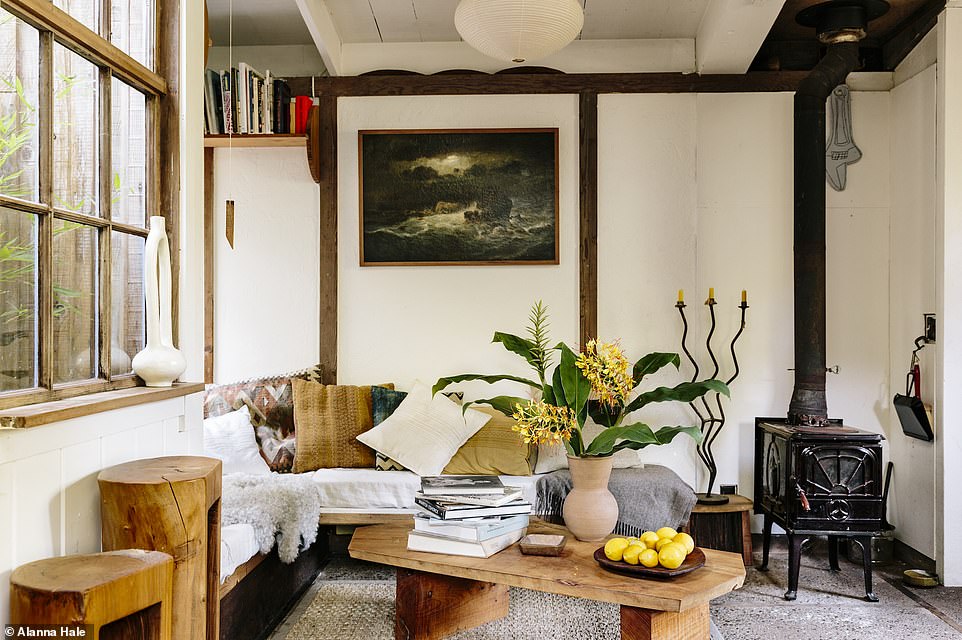 INVERNESS, CALIFORNIA:  According to Todd, Yoshimoto’s ‘original construction project saw him slowly building up the home entirely by himself, fashioning the shelves, lights, tables and stools for the humble cabin in his nearby workshop’. The artist tells her: ‘My goal was to create something comfortable and liveable while applying my aesthetic and using the materials available, most of which were reused and reclaimed scraps from my art studio.’ The book reveals that almost everything in the home is ‘built-in’ to save on space 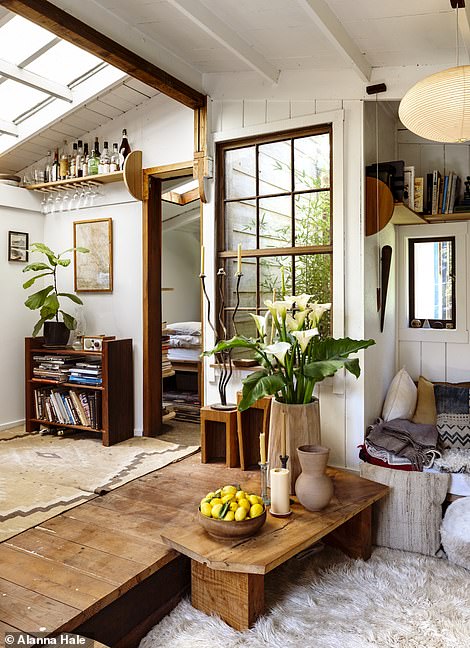 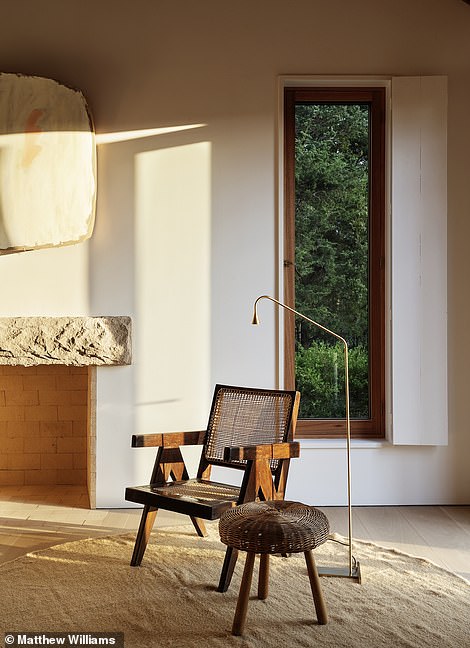 INVERNESS, CALIFORNIA (LEFT): Another room in Yoshimoto’s stunning home. Todd writes: ‘In furnishing the home, Yoshimoto turned to his community to source the domestic tools that would populate his day-to-day life.’ The artist tells the author that every plate, cup and bowl in the home is made by an artist he knows, or was discovered during his travels. SHELTER ISLAND, NEW YORK (RIGHT): The charming Shelter Island cottage owned by real estate entrepreneur Nick Gavin and his young family. Describing the location, Todd says: ‘A slightly slower and less ashy alternative to the nearby Hamptons, the bucolic charms of the island are what convinced Nick to purchase a simple cedar-shingled one-room cottage a short walk from the beach’ 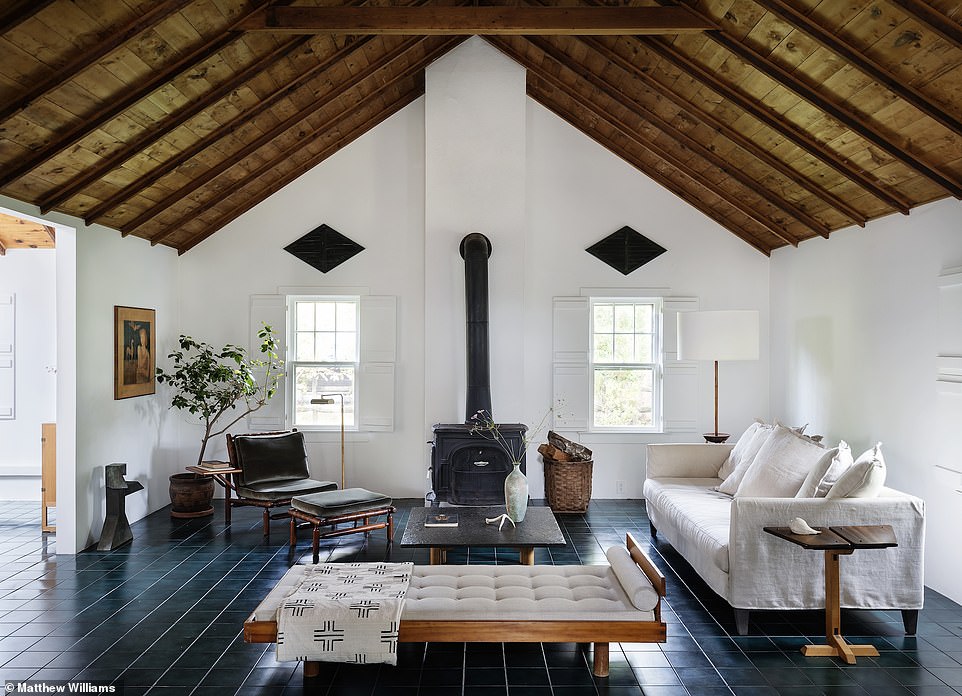 SHELTER ISLAND, NEW YORK: Another glimpse inside the island retreat. Todd says the choice of furnishings in the property ‘mesh well with the home’s quietly unpretentious aura’ 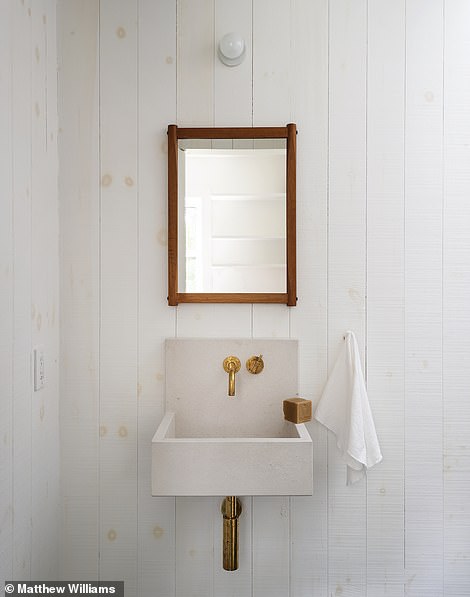 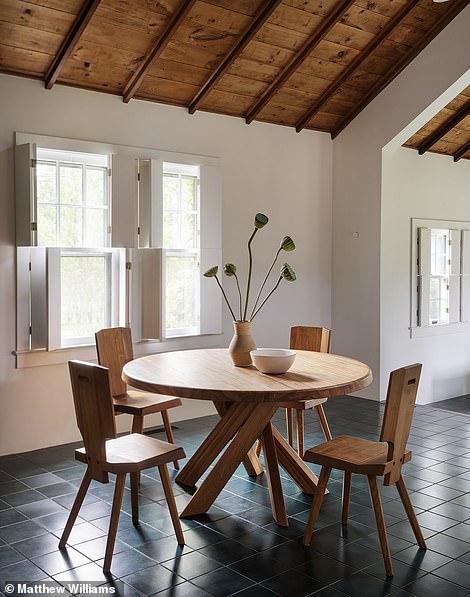 SHELTER ISLAND, NEW YORK: On the left is a bathroom in the cottage, which was originally built in the 1940s. ‘At first, Gavin was content to keep the space as-is, but a marriage and a baby later he knew some extra room would be required,’ Todd reveals. According to the book, the homeowner recruited Brooklyn-based design firm Workstead to modernise the building. ‘What they came to him with was a second structure, built in the same style as the original, that could house an all-new primary bedroom and bathroom suite,’ Todd says. Workstead designed a glass passageway to connect the original property to the new structure. According to Todd, the family ‘left the common areas as simple and uncluttered as they found them, choosing furniture, such as a Pierre Chapo dining table (pictured on the right)’ 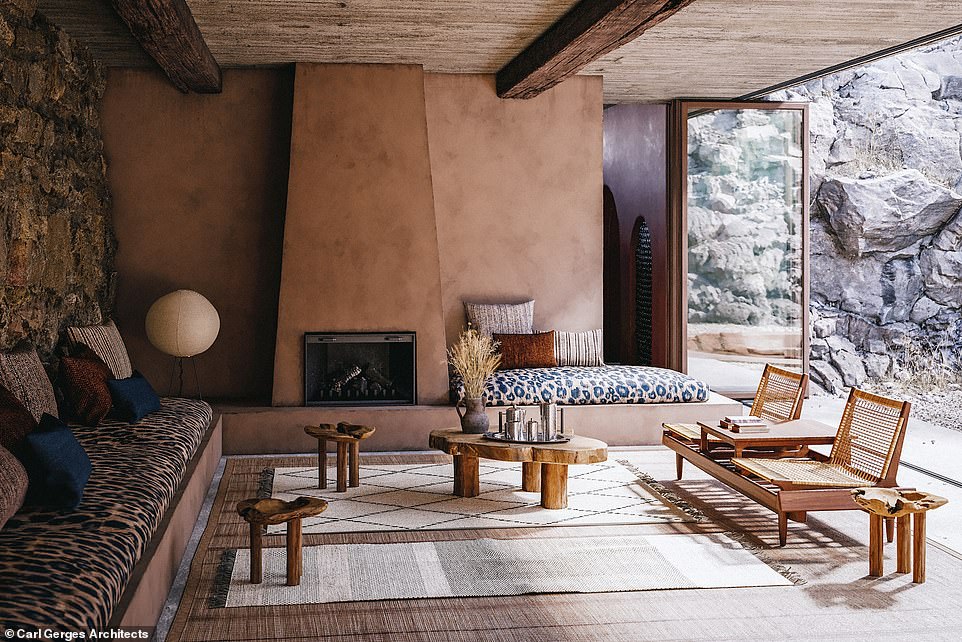 BHAMDOUN, LAMARTINE VALLEY, LEBANON: Todd describes this beautiful property as ‘a stone guesthouse hidden within a mountain’. She says: ‘Hidden in the rugged peaks overlooking Lebanon’s Lamartine Valley, a vast and remote region straddling the main road to Damascus where Phoenician tombs and ancient rock formations have sat undisturbed for millennia, is this monolithic stone guest house designed by Beirut’s Carl Gerges Architects’ 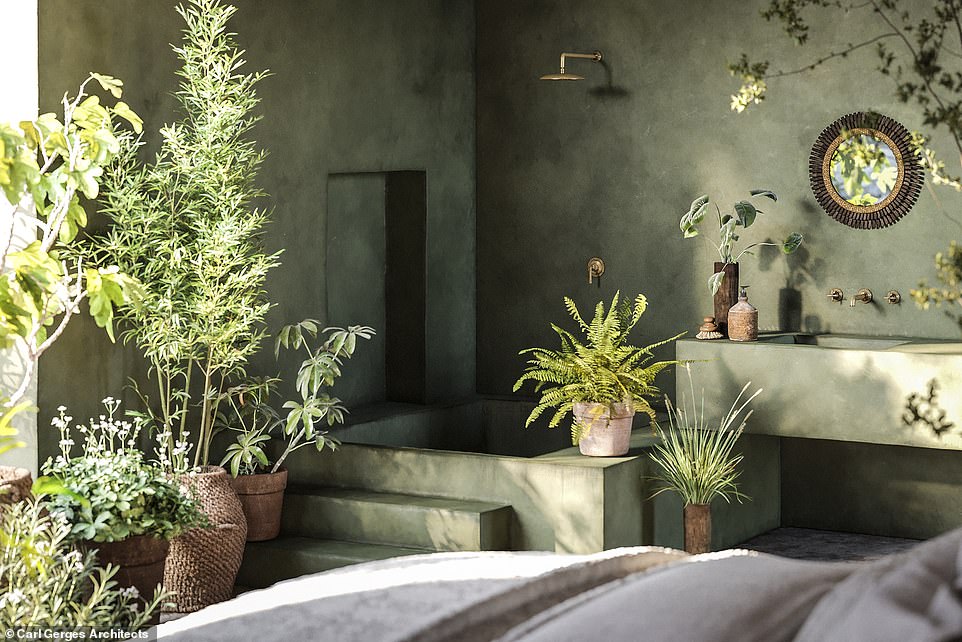 BHAMDOUN, LAMARTINE VALLEY, LEBANON: The olive-green walls, pictured, are finished in ‘Tadelakt’, a form of waterproof plaster first used in Morocco over two millennia ago, Todd explains. According to the book, the mountain retreat – which is set in an area famed for its vineyards – ‘has an imposing facade that gives way to a bright and inviting sanctuary’. The author writes: ‘Warm natural materials such as reclaimed timber ceiling beams, organically shaped wooden furniture and textiles in the form of thickly woven Berber rugs provide a gentle foil to the harsh surroundings, which are integrated into the design in the form of natural stone interior walls – rendering the structure almost indistinguishable from its landscape’ 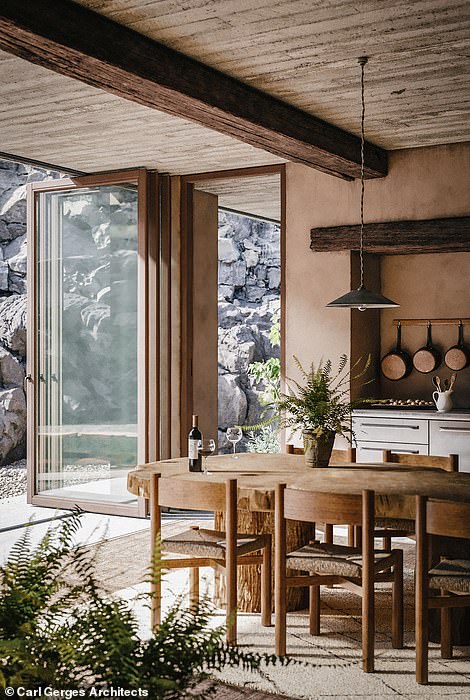 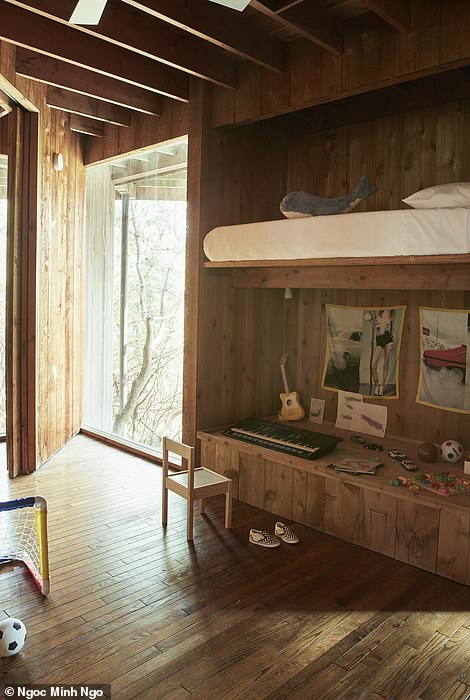 BHAMDOUN, LAMARTINE VALLEY, LEBANON (LEFT): A third picture of the stylish Lebanon property. The book reveals that Carl Gerges Architects turned to traditional North African building techniques when designing the primary bedroom and bathroom in the home. Todd adds: ’But the real secret weapon in this home’s arsenal of features perfectly envisioned for entertaining is the underground tunnel that leads to a cavernous wine cellar, holding barrel upon barrel of locally harvested wine.’ FIRE ISLAND, NEW YORK (RIGHT): This beautiful property was designed by the US architect Horace Gifford. It’s owned by James and Hara Perkins, who have a ‘mutual love for modernist architecture’. The book reveals: ‘When they took possession of the property in early 2020, just before the first pandemic lockdowns, it had been in the same family since it was first built in the 1960s. They spent the early months of quarantine renovating the space themselves, stripping back the layers of time to restore it to its original glory’ 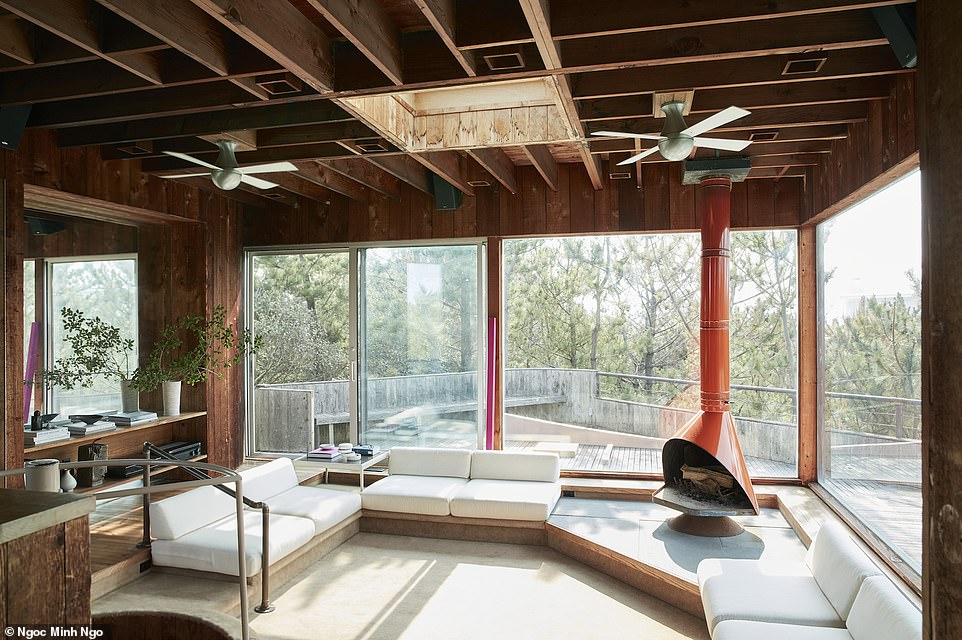 FIRE ISLAND, NEW YORK: The living area in the island retreat. Todd says of the design: ’The Perkins’ house boasts a number of striking features – including a sunken living room with built-in sofas and floating fireplace; floor-to-ceiling windows that look out onto the ocean and a wraparound deck; curved walls and clever multifunctional bedrooms that can be divided or opened up at will – all lined with natural cedar planks constructed by legendary local carpenter Joe Chasis’ 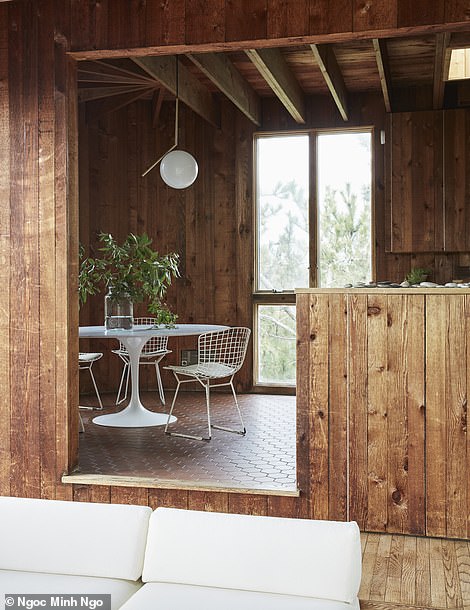 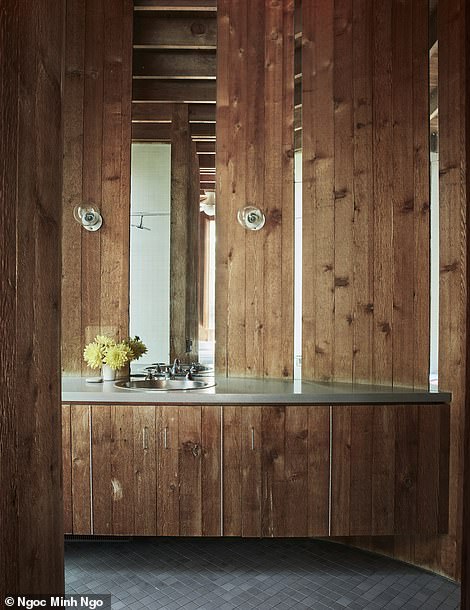 FIRE ISLAND, NEW YORK: Describing renovating the historic property, James Perkins tells Todd: ‘I think of the house as a vintage Porsche or a watch that has this beautiful patina you don’t want to touch, so doing these projects alone we had to be very careful not to damage any of the beautifully handmade rooms.’ Pictured on the right is another carefully curated room in the Fire Island property – the bathroom 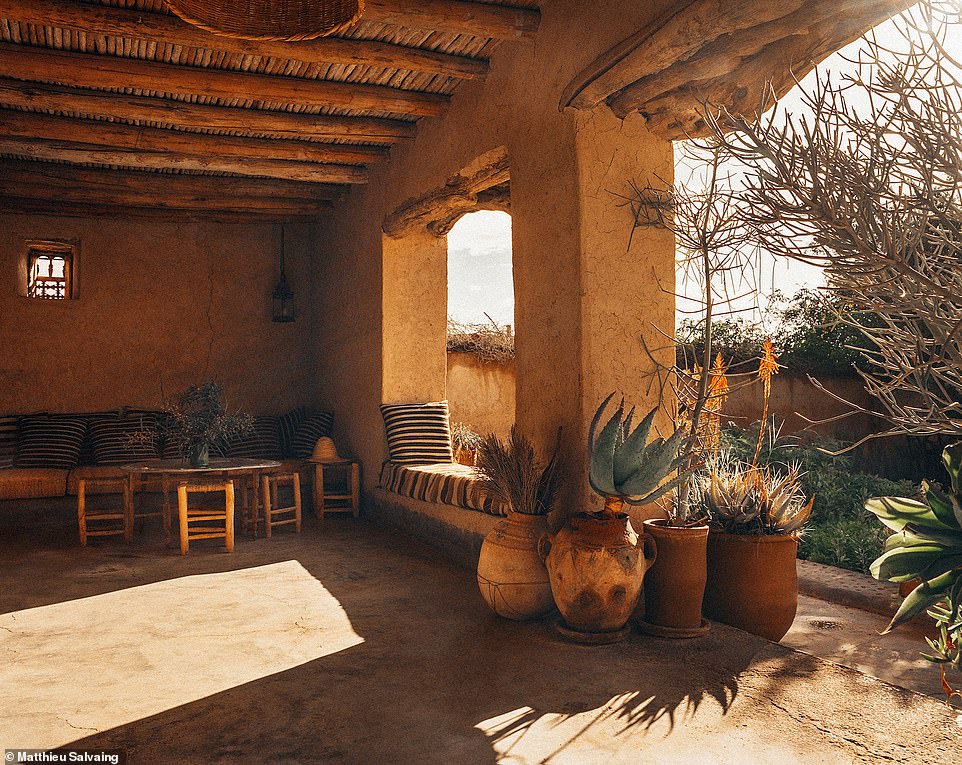 MARRAKECH PREFECTURE, MOROCCO: Todd sums up this spectacular property as ‘an off-the-grid escape in the Moroccan hinterlands’. It’s owned by Karl Fournier and Olivier Marty, who first met as students while studying architecture in Paris. ‘What was once a farmhouse owned by a Sahrawi family, a people native to this region of North Africa, had fallen into disrepair by the time Fournier and Marty were introduced to the former owners through a mutual friend,’ Todd explains. The couple acquired a 99-year lease for the ‘adobe-walled structure’ and then set about restoring the property 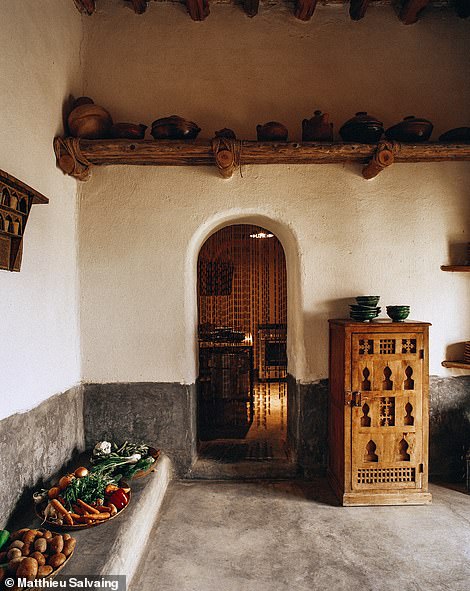 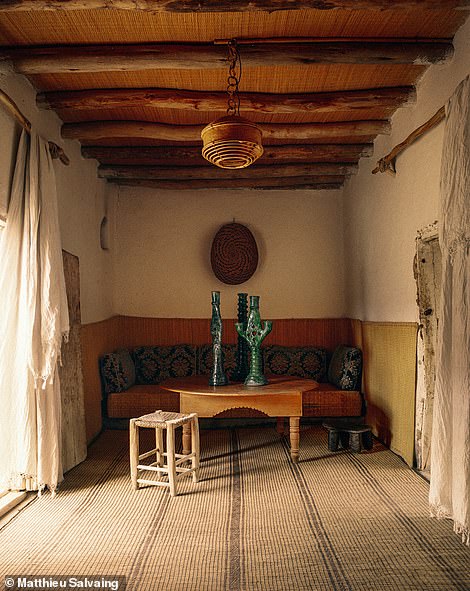 MARRAKECH PREFECTURE, MOROCCO (LEFT AND RIGHT): According to the book, the couple were intent on ‘keeping many of the vernacular architectural elements intact’ in the building. Todd says that the ‘heart of the house’ is a ‘large courtyard with four bedrooms, the hammam, the kitchen and the winter lounge.’ Fournier and Marty tell Todd: ‘We designed some things like the beds inspired by Moroccan “koursi”, which are small stools made of laurel wood and straw. Others have been found locally, like the chests of drawers and the desks’ 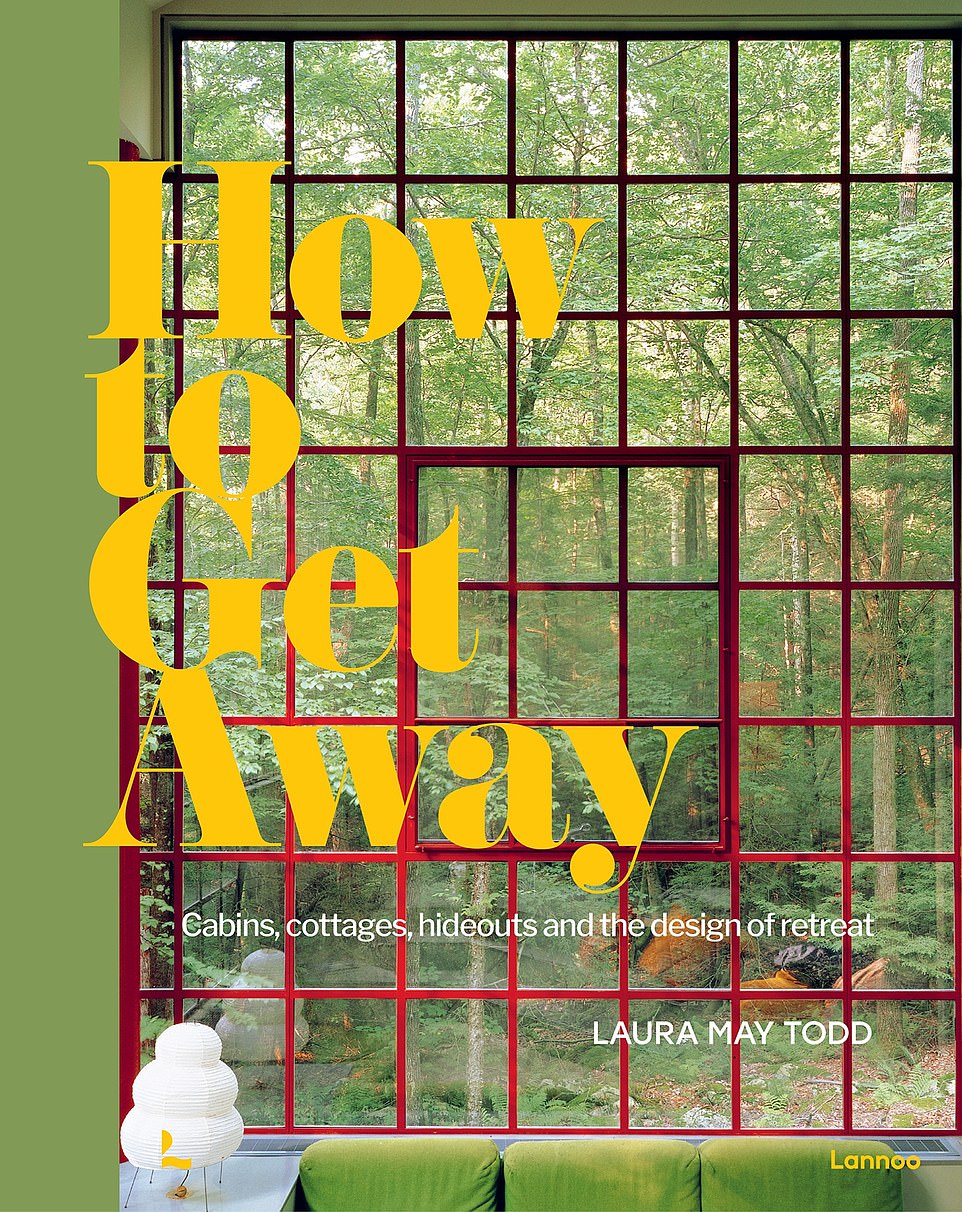 How To Get Away: Cabins, Cottages, Dachas and the Design of Retreat is written by Laura May Todd and published by Lannoo

Revealed: Airbnb's most-liked homes on Instagram in 2021
Greece hotel boasts overwater bungalows that cost much less than the Maldives
Aspen chic: Vacation like Mariah Carey and Beyonce at The Little Nell
Ryanair launches flash sale with over 200,000 flights to Europe from just £3.49
Spain holidays: Benidorm wants to scrap restrictions like England – ‘eliminate obstacles’