On a slow boat to Norfolk: Taking the helm of a 40ft craft and discovering the absolute delight of watching the world chug by at 6mph

When you’re cruising on a boat at a stately six miles per hour, the last thing you’re fearful of is being caught speeding. Yet 6mph is the fastest speed you’re permitted to go on the Norfolk Broads, Britain’s largest protected wetland and third-largest inland waterway.

But why on earth would you wish to go any faster? This tranquil quarter of East Anglia is awash with enchanting scenery such as fen, carr woodland and grazing marshes, the biggest blue skies and a wealth of wildlife.

Perhaps the most daunting part for first-timers on the Broads are the boats themselves. 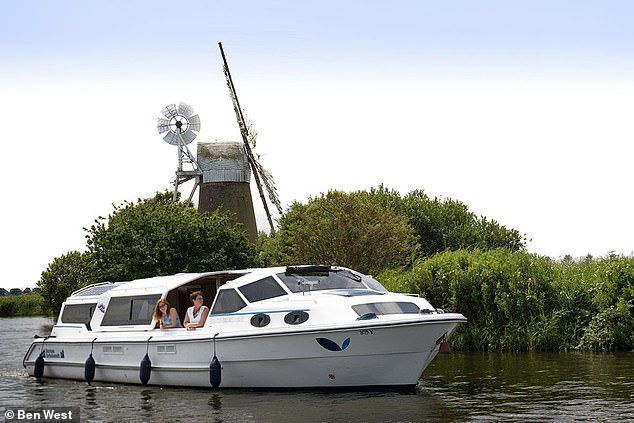 Taking life easy: A Serenade class boat that was used by Ben during his trip to the Norfolk Broads

At the Wroxham marina of hire boat company Barnes Brinkcraft, the one I tried was not small at nearly 40ft long. Yet it is surprising how easy these vessels are to use. Apart from steering, there’s a gear lever to move forwards or backwards, and bow-thrusters for fine manoeuvring in more demanding situations, such as mooring. Mooring stern-on (like reversing a car) can be especially taxing.

The Serenade class boat we chose was almost new and spotless. What is lost in character is gained in practicality. The boat cost £150,000 to build, and it seems remarkable that the company lets complete novices loose on them. ‘We maintain and repair them ourselves, and they go so slowly that accidents are very rare,’ explains the company’s Sara Thwaites.

Our boat contained a bedroom with a double bed in the bow, another bedroom with two singles in the stern, and a generous lounge and kitchen area with the possibility of converting the seating into two further beds. The two bathrooms were ingenious, cramming a shower, loo and basin into a space not much bigger than a double wardrobe. There was hot and cold water, heating, a fridge, hob, microwave, TV and wi-fi.

Before exploring the 124 miles of navigable waterways – the result of 12th Century peat extraction – we were given instructions about manoeuvring the boat, filling up with diesel and water, and using the mud weight for anchoring.

Most Broads newbies no doubt consider it marvellous to be able to cruise the peaceful waterways within an hour, without having to endure a long boating course. 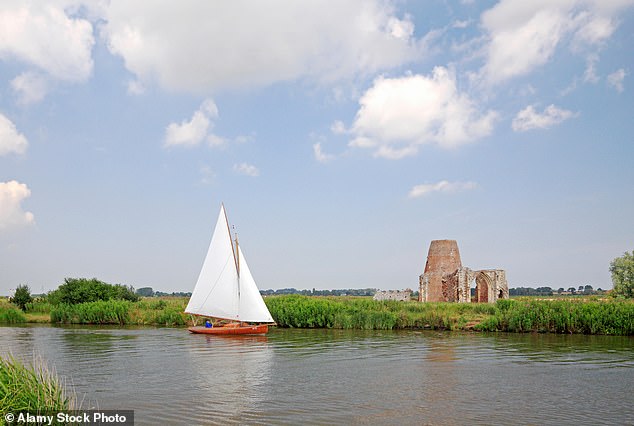 The ruins of St Benet’s Abbey, which are located along the River Bure in the Norfolk Broads 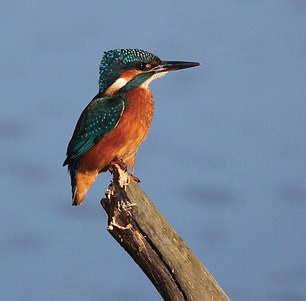 On the lookout: The Broads teems with wildlife, including kingfishers

If you head along the River Bure to the village of Horning, you’ll pass rows of cute little timber waterside homes, often with their owners watching the world go by from their tiny, neat gardens.

Swathes of unspoilt countryside follow, a feast of reedbeds, forest and fields. Wind away the electric roof and windows, and the Broads open up even more.

Horning has three pubs and is also near the fantastic Bewilderwood theme park (handy for children who want to get off the boat for a few hours).

However, moorings are in high demand here and so are those near other pubs and villages.

At peak season, you definitely need to think about mooring up in the early afternoon at popular places, or book ahead when possible, otherwise it will be like trying to find a supermarket parking space in the run-up to Christmas.

As well as the Broads Authority’s free moorings, there are those typically attracting a £5 or £10 nightly charge, and you can stop along the banks in many places, although you’ll often be next to reed beds or deep mud and away from dry land.

Tiny Salhouse Island, near Hoveton Great Broad Nature Trail, where you can learn about the local habitat and wildlife, is a good spot to moor up.

It’s glorious to sit on deck in almost complete silence with a glass of wine as the sun goes down and is replaced by a smattering of twinkling stars. Indeed, whenever you turn off the engine, it is lovely to hear no more than birdsong or laughter from a passing boat. 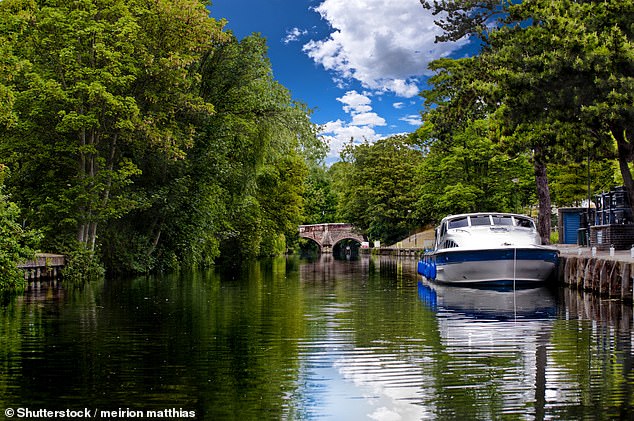 If you’re lucky you may even hear a bittern, but you are unlikely to see one as they are rare. You may even encounter pirates invading the boat: I found three mallards parading the deck on our boat in search of bread or some other treasure.

For a city-dweller, it was a real treat to examine a duck in such detail, just three inches away on the other side of the window: the gleaming, colourful feathers, inquisitive eyes and bright orange webbed feet.

In the distance, three swans flew past in a formation the Red Arrows would envy.

Along the River Bure you’ll also stumble across the pretty ruins of St Benet’s Abbey, and one of the Broads’ numerous attractive windmills. An atmospheric place, with no roads or other settlements, it’s an ideal spot for a walk.

Cycling is another popular option, with the flat terrain mercifully unchallenging. Broadland Cycle Hire (norfolkbroadscycling.co.uk), near Horning, charges £13 for half a day for an adult bike, and has several suggested routes. The Broads By Bike (thebroadsbybike.org.uk) has even more options.

The Broads’ narrowest river, the Ant, is worth a detour and offers one of the prettiest waterways. You’ll breeze past charming villages such as Ludham, with its pub, tea rooms and shop, then peaceful Irstead, with its thatched medieval church. 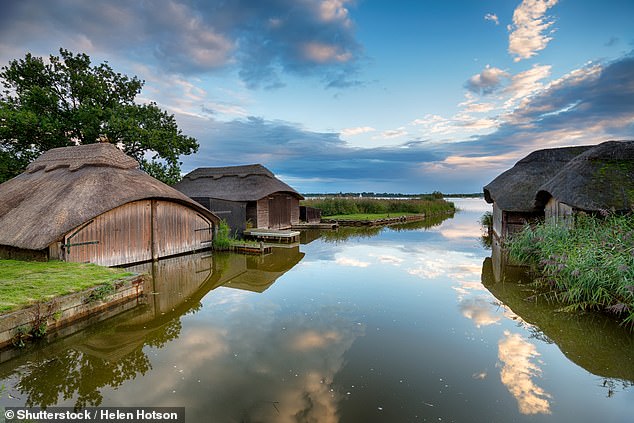 All along the Broads, signs indicate the maximum permitted speeds, which vary from 3mph to 6mph

Don’t miss the traditional marshman’s house, Toad Hall Cottage at How Hill, and get a fascinating glimpse into life here a century ago. There are also nature trails and landscaped water gardens.

All along the Broads, signs indicate the maximum permitted speeds, which vary from 3mph to 6mph. As tempting as it is to have a glass of wine with a picnic lunch, even at 3mph you need to have your wits about you.

Not concentrating for a few seconds could mean you are heading for an oncoming vessel. As fines for speeding on the Broads can reach £1,000, it’s important to keep to the limits. They are there to stop erosion of the banks, protect those on board moored boats, and to prevent disturbing nesting birds at water level.

The Ant opens up to a large expanse of water, Barton Broad, where you can head for the White Horse at Neatishead, a delightful traditional village pub which brews its own beer and uses local suppliers. The pork and apple burger hits the spot after a morning at the helm but there are plenty of wraps with veggie crisps and slaw on offer too. And Neatishead Public Staithe is a good place to settle for the night.

You don’t need to be particularly fit to enjoy a boating break, although the layouts and different levels on most boats make them tricky for anyone less mobile to navigate.

If you are unsure whether you’d like a boating break for a whole week, try out a relaxing weekend visit instead and follow a short itinerary (and there’s no need to leave your dog at home – they’re allowed on board).

The secret to a wonderful holiday here is not to try to do too much or attempt to travel the length and breadth of the Broads.

Keep your daily voyages modest and this can be one of the most relaxing places on Earth.

Ben West was a guest of Barnes Brinkcraft. Serenade class boats, sleeping six, cost from £719 in low season to £1,436 in high season, plus £40 fuel and damage waiver for three nights.