Back to the bush: Safaris are open again – and the elephants in Kenya are among the biggest on earth. Best of all, this lodge doesn’t need a jumbo wallet

Within a few hours of arriving in Tsavo East National Park we are surrounded by a herd of bull elephants with enormous tusks.

They are turning and tossing their heads, jostling for places at the water hole, chasing off buffalo, zebras and reticulated giraffes for the prime spots at the water’s edge. Clouds of Tsavo dust hang in the air. It feels great to be back in the African bush on safari.

By modern standards these are big tuskers, some looking like their ivory weighs 80 lb a side. In the old days, before poachers took out most of the large tuskers in Africa, anything under 100 lb a side was seen as common. Nowadays most elephants bear modest toothpick tusks, so these big Tsavo bulls are a rare treat — and a sign the area is in good shape. These are some of the biggest bull elephants I have ever seen. 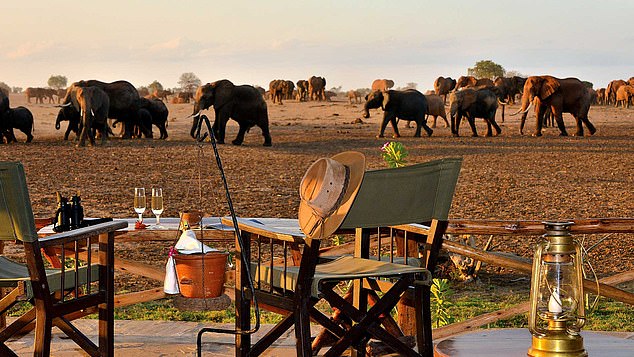 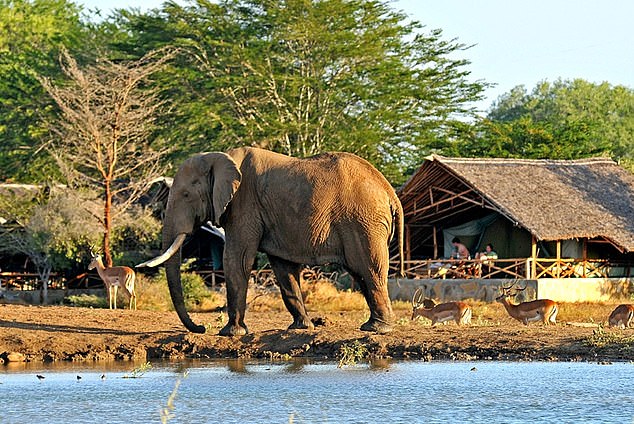 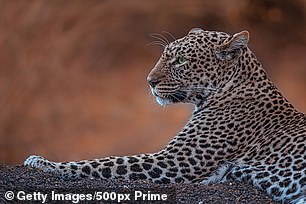 The other notable, and equally rare, treat is that there are hardly any other safari vehicles in sight.

Since the scourge of Covid all but obliterated international safari tourism more than 18 months ago, Kenya has been able to welcome a mere trickle of intrepid travellers prepared to run the regulation gauntlets.

In 2019 around 180,000 Britons travelled to the country. It is estimated that the country lost almost a billion dollars in lost tourist revenue in 2020.

However, the absence of traffic through the parks has not, as expected, led to a spike in poaching, according to security experts. Protection of the most vulnerable animals — elephants and rhinos particularly — has been maintained thanks to continued international NGO support for Kenya Wildlife Service patrols. 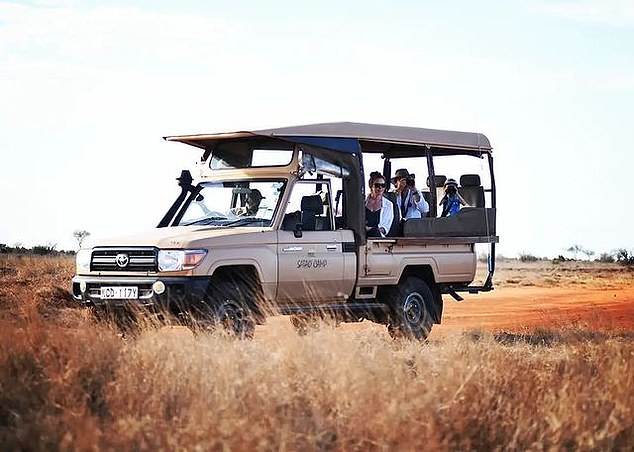 Satao Camp visitors on a safari trip. Graham says that the Tsavo East elephants ‘view the presence of humans in Land Cruisers with some suspicion’

The lodges stayed open and were run on skeleton staff, with locals the main source of visitor traffic. Now that the restrictions have been lifted and Kenya is off the Red List, they are expecting a surge of Westerners in the safari camps across the country and are anticipating a full-on Christmas.

And why not? It is exhilarating enough just to breathe the crystal-clear air, to contemplate the endless horizon and to be viscerally connected to wilderness. But to have the bonus of an endless procession of wild animals swirling around you makes an African safari a trip of a lifetime.

My companion is Nick van Gruisen, founder of the Ultimate Travel Company and a former licensed professional guide in Botswana.

As the elephant herd moves away from the watering hole and the sun begins to set across the plains, we drive back to Satao Camp where we are based, accompanied by small squadrons of carmine bee-eaters on both sides of the Land Cruiser, flying alongside the vehicle and feeding on the insects disturbed by our transport bouncing across the dirt tracks. Apparently, it is common in Tsavo and is a vivid and profound display of the adaptability birds and animals exhibit in the wild. 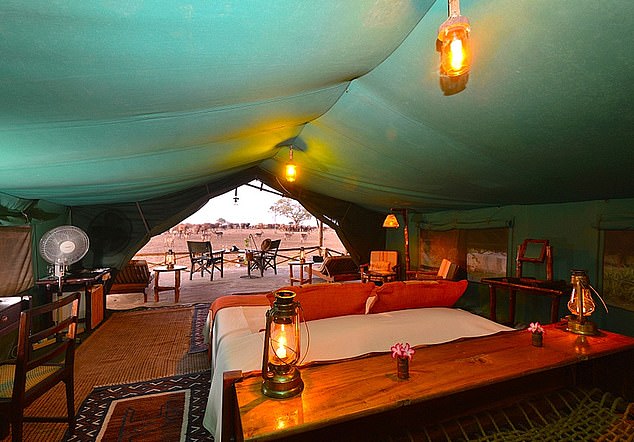 Safari suite: Tented comfort at Satao Camp. A stay there can be booked through The Ultimate Travel Company 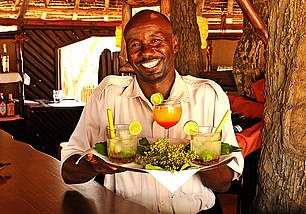 A warm welcome at Satao camp

I’ve never seen anything like it, and it is affirmation that the splendour of the African bush experience isn’t all about the large signature animals such as elephants, rhinos and lions.

The survival of the African wilderness and the flora and fauna within it depends enormously on the kind of adaptability and resilience shown by these carmine bee-eaters.

Fifty years ago, Tsavo was being written off as a disaster area and a portent of the ultimate demise of wild Africa. The famous American artist-photographer Peter Beard, who died last year, dubbed it ‘Starvo’ and cited the massive elephant die-off in 1971 — a result of drought and over-crowding — as a portent of things to come not only for Kenya but for the African wilderness as a whole.

He flew over this national park in a light aircraft for days photographing carcasses scattered across the Tsavo plains, and used these images to dramatic effect in his 1977 edition of his book End Of The Game. 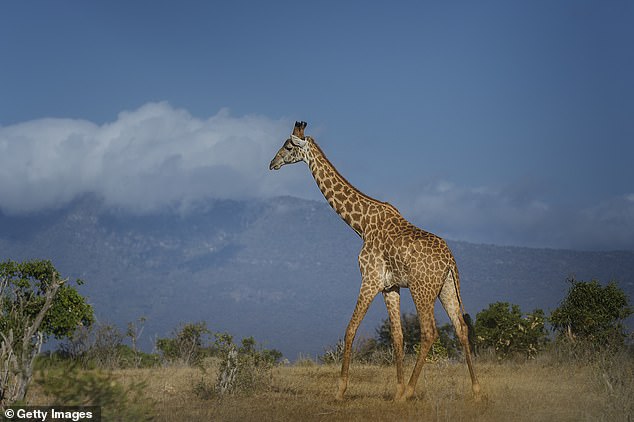 Fifty years ago, Tsavo, pictured, was being written off as a disaster area and a portent of the ultimate demise of wild Africa

Beard’s bleak assessment of what he regarded as man’s mismanagement of nature did not go down well with the country’s wildlife authorities and he was subsequently banned from the park, although this was more for his general dissidence than his philosophical stance on conservation.

However, although he was prescient about many things, mainly that if you crowded elephants into a confined space they would destroy woodlands and have a profound impact on biodiversity, he was wrong about the inevitable destruction of ‘Starvo’.

More than 10,000 elephants died in the 1971 drought. Today, however, the elephant population has, to some extent, recovered and is stable at around 12,000, while this landscape of semi-arid grasslands and savannah is now regarded by modern conservationists as a biodiversity stronghold.

That night, back at Satao Camp, which is a delightful 20-tent encampment set among tamarind and acacia trees and populated by a large, habituated herd of relaxed impala, we are joined by the Woodley brothers, Danny and Bongo.

Their father Bill was one of the founding wardens of Kenya’s national parks, a highly respected conservationist who was also one of Peter Beard’s closest friends.

Over dinner, the sons of Bill confirm that the rise of Tsavo is testimony to the ability of nature to rebound. Not only had there been the 1971 drought and die-off but also a decade later there was a poaching pandemic of epic proportions that left the grassy plains filled with elephant skeletons minus their tusks.

A military anti-poaching campaign, driven by then President Daniel arap Moi’s shoot-to-kill policy, put an end to most of the poaching. 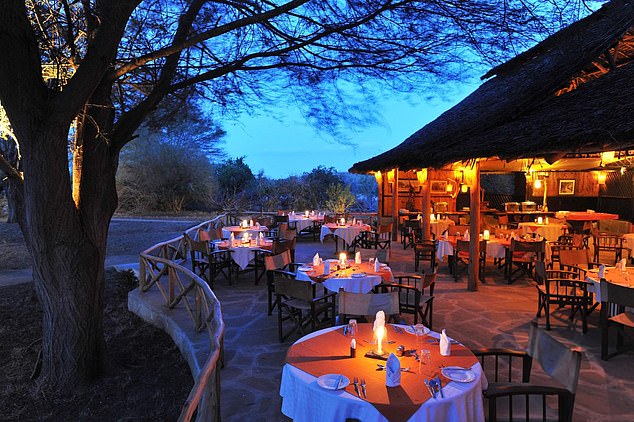 The Ultimate Travel Company (theultimatetravelcompany.co.uk, 020 7386 4646) offers a seven-day Kenya safari trip that includes four nights in Tsavo East National Park at Satao Camp and one night at Hemingway’s in Nairobi. Includes all transfers, full board, AMREF insurance, park fees and B&B at Hemingway’s for £2,085 pp. Flights with BA from £544 return (ba.com) or Kenya Airways from £540 return (kenya-airways.com) are extra.

Bongo Woodley points out that the greater Tsavo conservation area, which includes neighbouring Tsavo West National Park and surrounding conservancies, covers an astonishing 45,000 square miles, which is half the size of the entire UK.

This means there is more than enough room for the elephant herds and, as we discover, gives visitors such as ourselves the impression that one has an eternal and endless landscape to oneself.

There remains, however, some evidence of human-wildlife conflict. These Tsavo elephants tend to wander beyond the great park’s boundaries into rural communities and raid crops in local villages. On many of the big bulls we see evidence of poison arrow wounds. All seem to have healed, but this probably explains their unsettled behaviour.

These are not like the placid, habituated elephants of the Maasai Mara. These are spiky, tempestuous animals that view the presence of humans in Land Cruisers with some suspicion, and it gives this safari a welcome frisson.

At night, we sit out under the stars in canvas chairs watching the animals come to the camp’s waterhole. Elephants, zebra, baboons, hippo, giraffe — all wander up, jostling for places at the edge.

In the darkness the resident lion pride roars, reminding us that these are the descendants of the famed man-eaters of Tsavo, the wild mane-less lions that killed and ate many workers constructing the Mombasa railway line in the late 19th century.

We will see some of the pride on the following day’s game drives but it seems apposite that their chilling roars echo through the inky black Tsavo night.

After four days of recuperative safari we return to Nairobi for two nights so we have time to enjoy the ramshackle pleasures of the Kenyan capital.

We are staying at Hemingway’s, a colonial-style hotel in luxurious gardens in the city’s Karen suburb, named after its most illustrious resident, scribe Karen Blixen, and it provides a sumptuous retreat after the dust and sweat of a full-blown safari.

We are just a mile away from the Karen Blixen Museum, a few miles from Peter Beard’s famous Hog Ranch encampment, and on the horizon we can see the fabled Ngong Hills of her Out Of Africa story looming over the Rift Valley. It is a perfect ending to this Kenyan adventure.

FROM SAVANNAHS TO SNOWY KILIMANJARO – FIVE OTHER KENYAN SAFARIS

Given the uniqueness of the safari experience it offers, Kenya is great value for money.

This is an outstanding reserve, a perfect expanse of savannah that runs along Kenya’s border with Tanzania. Famous for its wildebeest migration (usually in July and August) and lions.

Speke’s Camp is a small eight-tent camp located along the banks of the Olare Orok River. The canvas structures are furnished with reclaimed wood, animal bones and African fabrics, thus ticking all the green credential boxes. Cost: £275 pp per night sharing, plus £58 community conservation fees, (spekescamp.com).

Cottars 1920 Camp at the furthest south-east end of the Mara is a ten-tent luxury camp on its own 7,500-acre private conservancy. It is owned by the oldest established safari family in Africa — the Cottars — and plays a major role in local community conservation. Cost: £715 pp per night sharing, plus £85 community fee, (cottars.com).

The Il N’gwesi lodge is a prize-winning conservation initiative run by locals. More rudimentary than other camps. Cost: £220 pp per night plus £48 community fee (ilngwesi.com).

In southern Kenya and known for both its significant elephant herds and magnificent views of Kilimanjaro.

Tortillis Camp, named after the flat-topped tortillis thorn trees that dominate the area, is a small, elegant camp situated on a private concession accessed from within the park. All the tents have spectacular mountain views. Cost: £298 pp per night plus £45 community fee (elewanacollection.com).

Located on the banks of the Ewaso Ng’iro River, It was here that George and Joy Adamson raised Elsa the lioness.

Elephant Bedroom is a 12-tented camp on the riverbank. It is a birder’s paradise with more than 450 species recorded there. Cost: £285 pp per night plus £58 community fee (atua-enkop.com).