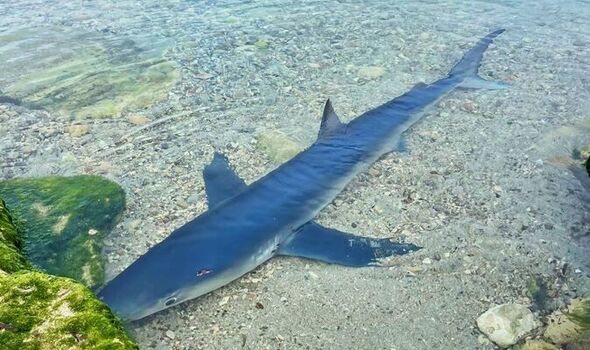 Locals and holidaymakers took video footage of the big fish by rocks by Calo des Moro, a cove in the urban area of the party resort of San Antonio, this morning.

The shark, believed to be a tintorera or blue shark, appeared to be disorentated.

Local council environmental officers have gone to the area.

Earlier this month lifeguards issued an urgent warning for bathers to get out of the water after a shark circled a beach in Majorca.

They were ordered out of the sea after its fins were seen breaking the surface of the water at Cala Mondrago beach in the south-east of the island.

It was also described at the time as a blue shark.

The same type of shark was blamed for an attack on a holidaymaker in Elche near Alicante in July 2016.

The 40-year-old victim was rushed to hospital and given stitches to a wound in his hand.

First aiders described the bite as “large” and said he had come out of the sea with blood streaming from the injury.

In August 2018 tourists fled the sea in panic after a blue shark, among the most common in Spain, appeared off the packed Majorcan beach of Calas de Majorca on the island’s east coast.

Calo des Moro is reached by a pedestrian promenade that runs along the coastline, beyond the busy area of shops and bars in San Antonio where the crowds gather to enjoy the sunset.