I sometimes think of the Cévennes as the massive knuckles of a sleeping green giant. Insular, tough-minded and Protestant, our home for the last 30 years has sharp granite and limestone hills that here and there stretch up out of deep valleys into proper mountains. Much of it is felted in dwarf holm oak, the evergreen and often impenetrable stuff of southern Europe, which turns metallic grey in poor weather, yet glitters beautifully under clear skies, simultaneously dark and resplendent, as difficult for a painter to capture as olive trees.

There are Alpine touches, despite its closeness to the Mediterranean: pine and spruce in dark green swathes on the higher slopes, tumbling streams among the great boulders, and the odd solitary eagle eyeing you from the level of the peaks. Beech and chestnut thrive on certain slopes, the latter providing an important income and a source of vital nourishment to the peasant Cévenol over the centuries. We gather chestnuts in season, careful to stick to those tumbled on to the paths, heeling open their spiky hulls to the nuts nestling inside like glossy cubs.

The Cévennes national park – created 50 years ago – provides an over-arching protection to the area’s teeming wildlife and variety of plants, and is the only reserve in France to be, blissfully, free of any major roads. Equally uniquely, it is a home for people to live and work in. This is the main justification for its Unesco world heritage status: the survival of traditional “agro-silvo-pastoralism”, which is defined by mobility and transhumance: the sheep in unenclosed flocks, the shepherds walking alongside them or sitting and surveying their charges, knowing each by name, even when they number into the hundreds.

Now a different kind of natural threat is endangering shepherding itself: the wolf. Like the vulture that feeds on the kills, the wolf is protected. Hunters are forbidden to shoot it. Sheep and increasing numbers of deer make for an easy supper, and shepherds on minimum incomes are giving up under the strain. A wolf print was found by our friends Jeremy and Alexandra, who run a gîte d’étape of yurts, wooden cabins and home-cooked food three miles up a forest track (jeep pick-up possible) “with a 360km horizon from the composting toilet,” as Jeremy puts it.

We rarely go for a local walk without encountering a shepherd and that telltale tintinnabulation of neck-bells. Last spring, after weeks of rain, this had a natural backing in the rush of a stream’s waterfall. I closed my eyes and imagined myself back on the southern chalk downs of England, perhaps in Edward Thomas’s time, before chemicals and cars: “The past,” as he put it, “is the only dead thing that smells sweet.” 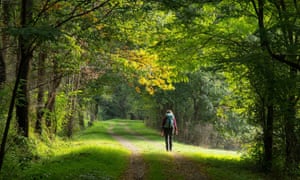 The Cévenol past, however, is riven with tragedy and violence, chiefly because of religion and a refusal to do the bidding of faraway Paris. “This land of persecution and reprisals,” as Robert Louis Stevenson called it in his classic memoir Travels with a Donkey in the Cévennes, thinking perhaps of the vicious aftermath of the Jacobin rebellion. The mountains certainly resemble the Highlands in places, with the most distant peaks fading into pale blue cutouts, like a Chinese silkscreen, layer upon layer. As poor as the capital was rich, apart from the local silk merchants and mine-owners (Alès, the Cévennes capital, still proudly displays its coal-waste hill), the area found solace in the puritan rigours of Calvinism, which, alas, has serious issues with art and just about anything pleasurable.

Five holiday regions of France you may not know

The good side is that those green knuckles became peculiarly tolerant of rebels, the rustic fist opening throughout history to those fleeing persecution. In the last war, the complex of valleys and concealed ways provided perfect cover for the resistance as well as for Jewish families sheltered by locals in the remoter villages. Back in the early 1700s, after much tit-for-tat violence and increasing oppression, some 10,000 Protestant rebels, mostly Cévenol and of a mystical, millenarian bent, held off some 200,000 troops loyal to the absolutist Catholic king, Louis XIV, using an intimate knowledge of the local terrain or what Robert Louis Stevenson called “their intricate hills” to harass and resist the enemy.

The Guerre des Camisards (the insurgents were so-called from their white shirts or camisoles) dragged on for years and remains resonant even now: our first rented house was the site of the local curé’s execution, the brambled, burnt-out ruins of his modest chapel lying just up the lane. Le Musée du Désert, in the farmhouse birthplace of Camisard leader Roland, in the village of Mialet, is as fascinating as the museum in a former silk mill in nearby Saint-Jean-du-Gard, homage to an industry killed off not by disease but by artificial textiles in the 1950s.

Saint-Jean-du-Gard was, in fact, where Stevenson ended his 12-day walk. The pretty little town boasts not only an excellent Tuesday market, where the local goat’s cheese, pélardon, flavoured naturally by Mediterranean herbs, can be bought in every condition from creamy fresh to mouldy hard, but also a steam train that puffs atmospherically across stone aqueducts with tantalising glimpses of the clear limestone river below, leaving genuine smuts on your face and clothes. To reach our secret bathing place nearby we have to pass through a long, dark tunnel, hopping from massive oak sleeper to sleeper, timing it to avoid being choked (or worse) by the train. Strictement interdit, of course, but it’s a useful shortcut. 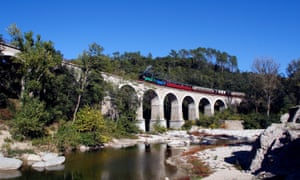 A professional walking guide from Britain reckons that the Cévennes hiking paths are as good as any in the world – if you’re up for a modest challenge: they are well-drained but often steep, rocky and loose-stoned, suddenly opening on to superb vistas where, on clear days in the southern Cévennes, you can pan across the shine of the Mediterranean, the toothy sheen of the Alps and, to the north, the great hulks of Mont Aigoual and Mont Lozère. A good place to start is the Stevenson path, roughly following the original 1878 route of the author and his faithful donkey, Modestine. Versions of the latter can be hired for several days and the trips include home-cooked food and simple overnight stays. Early booking is advised, unless it’s off-season. Details at chemin-stevenson.org and causses-cevennes.com.

A sunny trip through art history in Perpignan and Collioure

One ramshackle village on Stevenson’s route is an old family favourite: Le Bleymard lies at the foot of towering Mont Lozère, and we have holidayed there off-season to hike through the heather on well-marked tracks perfect for kids; there is a very modest ski station, too, and a cluster of no-frills gîtes in which to rest weary feet by the fireside. Somewhere in the forest around the village, Stevenson slept out “under the pines” in his self-devised sleeping bag, pondering the bright stars to the whiffs of a cigarette. The garage man in Bleymard knew all about the long-haired author. When I mentioned “that donkey”, he said, “Ah! Modestine!” and laughed as if at some personal recollection. I almost asked if he had met them. “Do you have any idea where he actually slept out?” Glancing around at the fir-clad slopes, he shook his head. “No one does. I slept out myself as a boy, dans la nature. It’s magic,” he added, through the petrol fumes. 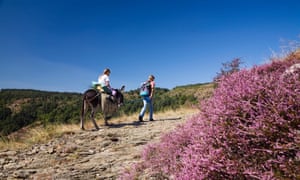 Petrol fumes were one of the reasons we abandoned London and secure (if modest) incomes for a sabbatical year. This stretched into decades, long after the novel I was here to write (Ulverton) was completed and published. Young enough to be foolish, we didn’t fancy going back to tube trains, stress and clamour. We first encountered the area when staying with friends in the 1980s, their schist-roofed granite mas (farmhouse) only reachable after a 20-minute slog up what felt like a minor cliff. We stood on their terrace and watched mountains being mauled by an approaching deluge, complete with echoing cracks of thunder.

We drew up a year or so later in a Citroën Visa packed to the gills with belongings and offspring at our small rented house, once an olive mill, whose stone walls stayed mostly cold – we hadn’t realised that southern France can drop below zero. We missed friends and family, of course, but solitude, as Laurence Sterne put it, enables the mind to “lean upon itself” and be strengthened. Instead of returning to London we bought a rough-stoned place even deeper in the hills. Although writerly impecuniousness meant we had to return eventually to the teaching grindstone up the (Roman) road in Nîmes, at least on weekdays, the stress soon dissolves in the sweet air of the Cévennes, where we can look out on fold after fold of calm forest fading into sheer distance.

• An edited extract taken from Notes from the Cévennes: Half a Lifetime in Provincial France by Adam Thorpe (published by Bloomsbury, £8.99). To order a copy for £8.39 visit The Guardian Bookshop 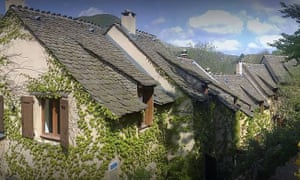 There is a row of stone holiday cottages just minutes from the historic centre of Le Pont-de-Montvert. Each cottage has a terrace that overlooks the valley with the River Tarn. Inside, the beamed ceiling and a woodburner create a rustic atmosphere, but there is also a modern kitchen. From the living area, wooden stairs lead up to the two bedrooms and a bathroom. It’s perfect for self-catering – but there is an option for an evening meal to be delivered by the host.
• €22pp a night or €45pp half board, cevennes-gites.com

La Ferme de Lancizolle, Saint-Germain-de-Calberte
This family-run farm, in the valley about 3km from Saint-Germain-de-Calberte, offers accommodation in gypsy caravans and wooden huts on the steep hillside. Each hut/caravan has a bathroom and a small terrace. Breakfast – a selection of homemade jams, toast and coffee – is delivered to the hut in a wicker basket or served in the farmhouse. Home-cooked dinner, using ingredients mainly from the farm, is offered (for an extra fee).
• Sleeps two, €70 a night B&B, causses-cevennes.com 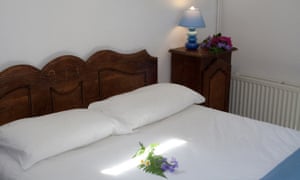 This former railway station turned guesthouse is a popular stopover for hikers. Its four bedrooms are simply furnished with dark oak furniture. The headboards are engraved with Robert Louis Stevenson’s initials – in reference to the long-distance trail that passes by the building. Buffet dinners can be eaten outside.
• €35pp B&B or €53pp half board. There are also dorm beds with shared facilities for €19pp or €45pp half board, relais-stevenson.fr

Chez Les Paysans, Florac-Trois-Rivières
This rustic restaurant in Florac offers simple, local dishes and its vine-covered terrace is a great spot for lunch or dinner. Popular with locals, the three-course meal is a must – salad followed by sausage with aligot (mashed potato with lots of cheese) and finished with a chestnut cake (from €17pp). The adjoining farm shop sells jam, cheese and other local goodies.
• On Facebook 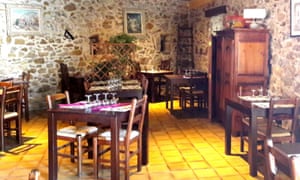 Simple local lunches and dinners are the order of the day at this restaurant – part of an inn – where the interior is dominated by stone walls and huge beams. Furnished with dark wooden tables and chairs, it is an ideal choice for a candlelit dinner. There are outdoor tables, too, for lunch or afternoon drinks in the sunshine. A three-course evening set menu highlighting traditional dishes starts from €16.
• From €60 a night room-only, logishotels.com

Looking for a holiday with a difference? Browse Guardian Holidays to see a range of fantastic trips

Cruise industry reacts as one company says passengers must be vaccinated
California Just Set up a Hotline You Can Call to Help Plan a Future Trip to the State
14 things you need to know about getting COVID-19 tested for US-bound international flights
Could Joe Biden reverse America’s railroad disaster?
Where will you travel when the pandemic ends? Readers share their post-pandemic trip plans