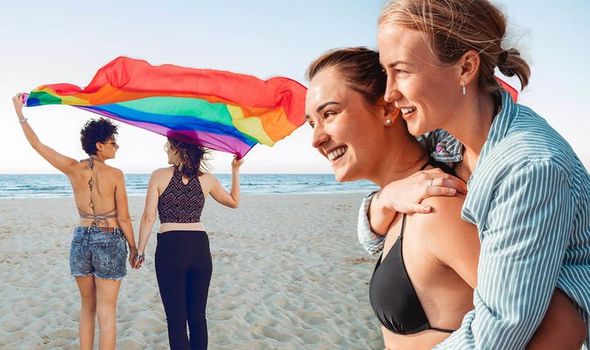 Travelling is an incredible experience for many of us. But for others, choosing a destination can be an incredibly stressful experience as many LGBTQ+ tourists could find themselves in unsafe situations depending on where they choose to spend their holidays. Spartacus has compiled a Gay Travel Index since 2012, ranking 202 countries based on whether they are safe to travel to, and Express.co.uk has mapped the best and the worst.

Jointly topping the list in the number one spot are Canada, Malta and Sweden.

Also in the top 10 spots are Austria in fourth, followed by Argentina, Spain, the UK, Uruguay and the Netherlands in joint fifth.

The UK scored a total of nine points, dropping -1 for the ‘religious influence’ and ‘intersex or third option’ categories.

Other popular tourist destinations included on the top of the list are Germany, Portugal and New Zealand in joint 10th place, Australia in 18th and France in 23rd.

Ireland ranks in 23rd place with five points, while the USA comes in at 31st with four points.

While Joe Biden may be hoping to champion a fairer society, America dropped -1 points for its lack of transgender rights, religious influence and the terrifying category of ‘murders’.

Four countries have been ranked the least safe, with Saudi Arabia and Iran scoring a staggering -18 and coming in joint 199th place.

Somalia scored -19 while Chechnya, at the bottom of the list, scored -20.

Of all of those bottom five, -5 of the points being lost came under the ‘murders’ category.

Other countries among the bottom of the table are the UAE at 195th, Indonesia and Egypt at 181st, plus the Maldives, Jamaica and Russia in 161st.

Full list of the 15 least safe countries for LGBTQ+ travellers:

You can find the Express.co.uk map of the safest and least safe destinations above.

One keen traveller spoke to us about their experiences of holidaying abroad as a member of the LGBTQ+ community, saying: “It’s 2021 and yet I still can’t go on holiday with my partner to dozens of countries, unless we want to pretend to be friends or cousins when in public.

“It’s something many people don’t consider – because they thankfully don’t have to – but for us, we have to do a lot of research before we decide to go anywhere. No spontaneous trips for us!

“I can’t wait for the day I can just go away and walk down the street holding my girlfriend’s hand without having to worry about the danger I could be putting us in.”

The UK Government’s Foreign, Commonwealth and Development Office advice reads: “Attitudes towards lesbian, gay, bisexual and transgender (LGBT) travellers around the world can be very different from those in the UK.

“However, you’re unlikely to have problems if you prepare well and research your destination before you go.”

The FCDO travel advice adds: “In some countries, homosexuality and/or homosexual relations are illegal and can be subject to severe penalties.

“In countries where homosexual relations are legal, levels of tolerance and acceptance within society may still vary hugely. In some places, it may be best for all couples to avoid overt public displays of affection so as not to attract unwanted attention.”