If you’re after the finest food… the REAL capital of Italy is PIEDMONT! It’s world-famous for truffles, cheese and wine. But now a new wave of gastro-hotels are taking the nation’s culinary champion to new heights

Carlo, Carlo!’ Maria’s lyrical voice carries across the wooded hills, calling her 88-year-old husband to come in for dinner. But Carlo isn’t listening. He’s busy in the forest, his trusty dog beside him, searching for truffles.

This evocative scene – drenched in the golden light of autumn – is brilliantly captured in a new film, The Truffle Hunters, by directors Michael Dweck and Gregory Kershaw. The American film-makers spent three years immersing themselves in the time-honoured ways of life in the villages of Piedmont, in the north of Italy, to understand the mysteries of truffle-hunting.

Now released in UK cinemas, its artfully shot depiction of a place seemingly lost in time has already won accolades at Sundance, Cannes and other prestigious film festivals worldwide. 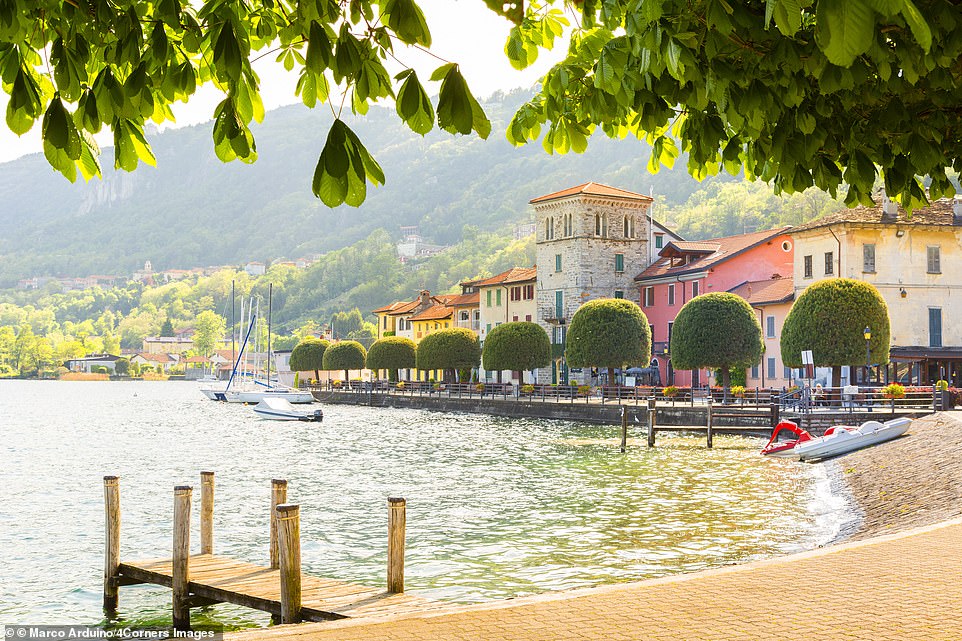 The sweet life: The peaceful village of Pella where you’ll find the super-stylish bolthole Casa Fantini

Its focus is a handful of men – old in years but young in spirit – who live around the tiny villages of Santo Stefano, Belbo and Roddino. Spending their days and nights hunting for the elusive white truffle, they are guided by an age-old culture and training passed down through generations, as well as by the noses of their cherished Lagotto dogs.

‘These communities still live in the world of their youth,’ says director Kershaw. ‘They listen to the same music they’ve listened to all their lives, they work the land they grew up on, they hunt for truffles in the same forests they’ve always known. It’s a very beautiful, simple life.’

As well as revealing a cast of often eccentric characters, The Truffle Hunters sets a painterly vision of Piedmont – of fairytale forests, of ramshackle but welcoming villages and of cosy homes where vats of pasta bubble away atop wood-burning stoves. 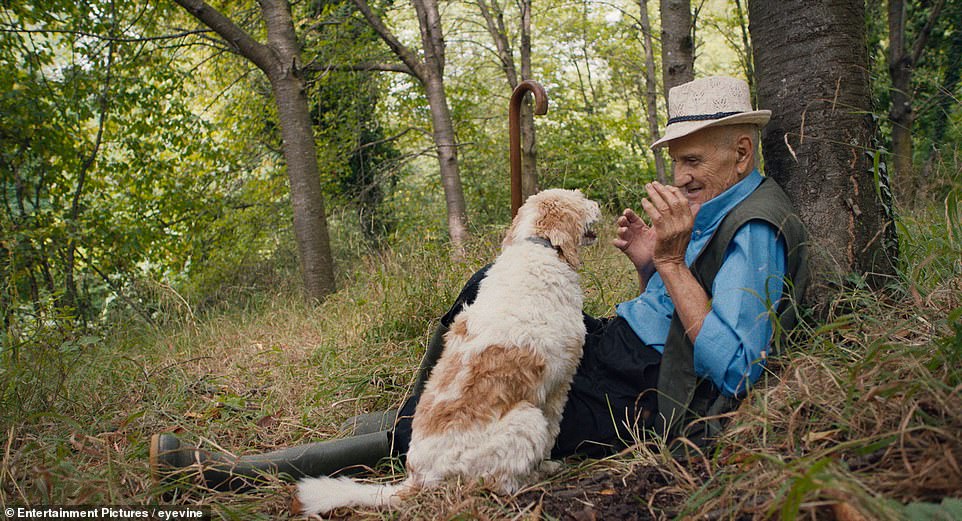 A scene from The Truffle Hunters film, which follows a handful of men who hunt for the elusive white truffle in Piedmont

It’s also an enigmatic introduction to the all-encompassing passion surrounding food which dominates life in this region.

Food is everything in Piedmont. Italy’s second-largest region after Sicily, it is framed by the Alps in the north, then sweeps south to encapsulate pastoral rolling hills, scenic lakes and vine-covered terrain.

The major city is Turin, but gourmet travellers will be most familiar with its food-focused towns such as Alba, Asti, Barolo and Bra.

Here truffles are sold for thousands of pounds, sparkling wines – some say comparable to champagne – are carefully cultivated and blood-red grapes are grown to produce classic vintages.

Nordelaia (nordelaia.com), a new hotel found in the untouched village of Cremolino, an hour’s drive south from Turin, aims to celebrate this food-fuelled heritage. Converted from an 800-year-old farmhouse, it now has soulfully rustic interiors designed by Rose Murray, director of hip London-based design studio These White Walls.

While the 12 rooms and suites are charming thanks to restful, nature-inspired details – stone and burnished metals softened with velvet throws and linen lightshades – it is the culinary offering which will truly wow, overseen by award-winning chef Andrea Ribaldone. From the Roccaverano cheese risotto overlaid with Fassone beef tartare to the delicate lemon tart with basil sorbet, Ribaldone’s dishes are all a riff on traditional Piedmontese cuisine using locally sourced ingredients.

‘Connection to nature and the local terroir [environmental conditions] is really important to me,’ he says, ‘and I have purposely reinterpreted classic recipes, passed on from nonna to mamma, which use the best of the region’s produce.’

There is also a more casual menu, with plenty of mouthwatering dishes on offer, including Nordelaia’s version of vitello tonnato, tajarin pasta (what the locals call the tagliatelle-like tagliolini) laden with sausage slices, hazelnuts and the most exquisite panna cotta made with figs and rhubarb.

As for room service, forget the bog- standard burger – instead, you can order a lavish charcuterie board featuring the best local cheeses and prosciutto.

Nordelaia guests can also connect to nature with walking trails around the 12-acre estate, foraging in the countryside or enjoying wine experiences in the surrounding pinot noir vineyard. If you want to know how those truffle-hunters find their treasure, you can try your hand at it with an expert’s help. 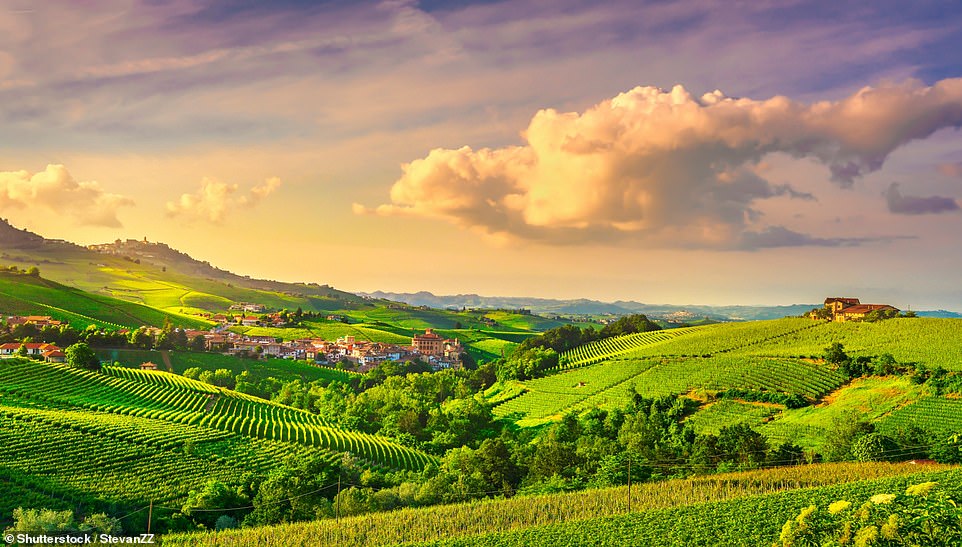 Gourmet travellers will be most familiar with the region’s food-focused towns such as Alba, Asti, Barolo (above) and Bra 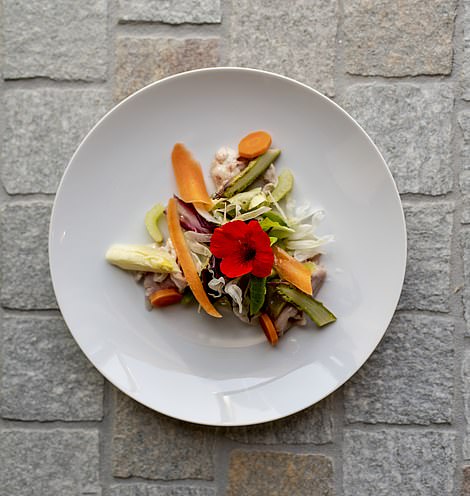 There are cookery lessons with Andrea Ribaldone or, for a real highlight, you can book a personalised tasting menu, eaten in the top floor of the three-tiered restaurant. Its glorious floor-to-ceiling windows are designed so that as guests dine, their eyes are continuously drawn to the views outside – it’s particularly compelling as the setting sun begins to casts its shadows over the valley.

There are also herb and wildflower gardens, a travertine-lined pool and a formal courtyard area with fragrant lemon trees in huge terracotta pots. Even the spa is inspired by the bounty harvested in Piedmont, with herbal remedies on offer as well as apitherapy – guests lie in a special ‘house’ above the resident beehives and breathe in the supposedly healthy honey-laden air.

Some 40 miles west, and also offering a taste of la dolce vita, or the sweet life, is the new Casa di Langa boutique hotel (casadilanga.com). From touring neighbouring vineyards on a vintage Vespa to taking lessons in farm-to-table principles, this is the place where you can deep-dive into a wealth of culinary experiences.

‘We have created a special truffle-hunting experience on our estate,’ says general manager Eva Codina. ‘Accompanied by a couple of trifulau [truffle-hunters] and their Lagotto dogs, you’ll go into the forest. Depending on the season, you’ll possibly find black or white truffles right on our doorstep.’

Based in its own vineyard, the 39-room Casa di Langa is located in the celebrated Barolo, Barbaresco, and Alta Langa wine-making areas. Understandably there is a focus on wine, with classes, tastings and visits to wineries on offer. For true wine buffs, they can even earn certification from the Wine & Spirit Education Trust, with Casa di Langa being one of the few WSET accredited hotels in Italy.

It all comes to the fore at the hotel’s star attraction: the Faula Restaurant. Chef Manuel Bouchard, who was born in Turin, is inspired by the age-old Italian custom of families and friends spending quality time together around a table. His menu is rooted in Piedmontese cuisine, with ingredients sourced from the hotel’s vegetable garden, orchard and local producers. ‘My passion comes from Piedmont,’ says Bouchard. ‘We have such a variety of products – from the mountains and lakes in the north to the hills of the south. I’ve become a connoisseur of many of the region’s recipes and believe that many don’t need any innovation to improve them – they are already perfect.’ 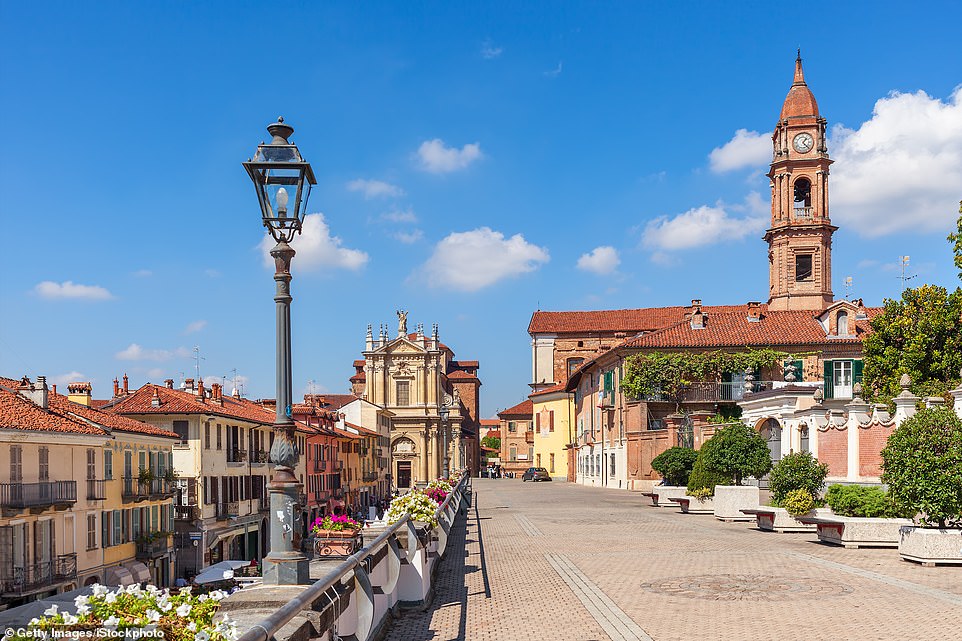 Appetising: The pretty town of Bra, where the Slow Food movement was started in 1986

Head north to Piedmont’s culinary heart. The Slow Food movement was formed in 1986 in Bra as a way to oppose the opening of a McDonald’s at the Spanish Steps in Rome and to champion ancient food production techniques. It has since spread across the world.

Nearby is Alba, a place where the mighty white truffle reigns supreme and where you’ll find one of Italy’s highest concentrations of Michelin-starred restaurants.

Just over an hour’s drive onwards, to the northern reaches of Piedmont, you’ll arrive at captivating Lake Orta. On its shores, in the quiet village of Pella, is the super-stylish bolthole Casa Fantini (casafantinilaketime.com). Owner Daniela Fantini says: ‘With just 11 bedrooms, the hotel is intimate. It’s a serene place, made peaceful because of the atmosphere of the lake. It is where you can truly taste the flavours – from the table to the landscape – of Piedmont.’ 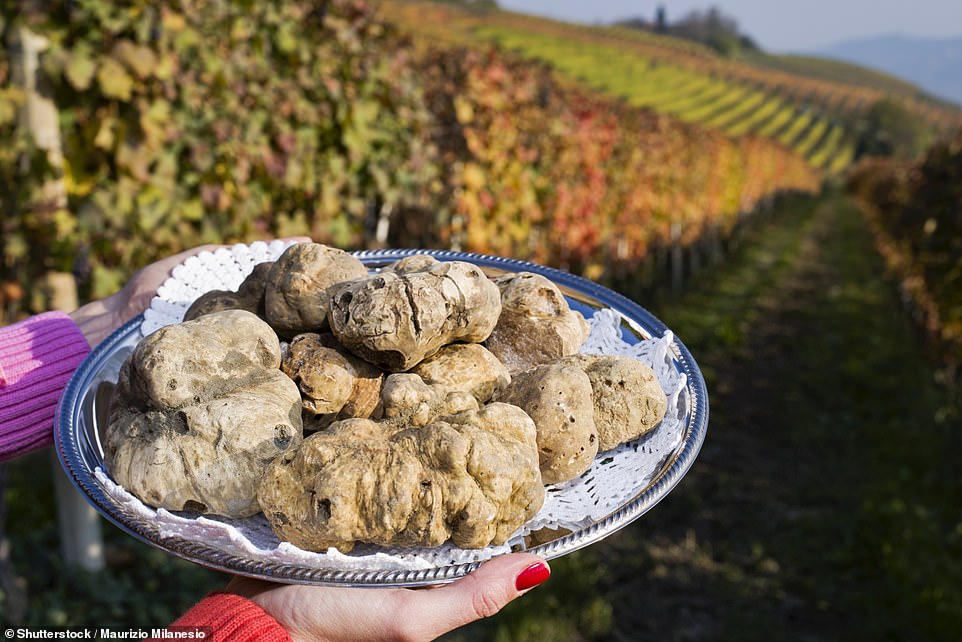 The kitchen at Casa Fantini is overseen by chef Paolo Bullone, whose specialities include his take on a regional pigeon and chicory dish that has been served in the nearby Vercelli area since 1860. There’s also tortellini with parmesan, black truffle and Breme onion (a local, large red onion); green tomato, lemon and red shrimp carpaccio; and a ‘famous’ apple cake – Bullone’s interpretation of a neighbourhood recipe.

By day, you can hop on the hotel’s boat and take a picnic to Orta San Giulio, perched in the middle of Lake Orta. Forget sausage rolls and limp sandwiches, Bullone’s lunch includes ‘tapas of the casa’ – caprese salads, fresh breads packed with mocetta (salted meat marinated with mountain herbs), and sausages.

When you return to Casa Fantini, Daniela, a convivial host, may invite you to have a glass of sparkling Alta Langa rosé at the bar. This might even turn into dinner with other guests at the long communal table. ‘Casa Fantini is a place where people tend to meet and bond – especially over food,’ she says. ‘What better way to celebrate the joy in life?’