Jonathan Simper is busy preparing his family’s idyllic farm on the sandy shores of the River Deben in Suffolk for the influx of weekend campers.

“We are in a beautiful place, down by the estuary,” he says. “We are fully booked this weekend.”

Simper is one of many farmers taking advantage of the boom in staycations by opening a campsite to boost revenues and put their businesses on firmer footings before the removal of EU agricultural subsidies, as well as an expected downturn.

The property agency Savills, which advises landowners moving into the tourism and leisure sectors, says the pandemic has accelerated existing holiday trends, with many more farmers and estates diversifying their businesses to cater for increasing numbers of tourists opting for camping, glamping sites and holiday cottages in the UK.

Simon Foster, Savills’ director of tourism, says that these are likely to be long-lasting changes: “Our view is that it’s here to stay,” he says.

“People are looking for somewhere safe, secure, secluded, where they can hunker down for a week, rather than staying in a big resort or a big caravan park or hotel.

“That trend for rural holiday accommodation, whether it be glamping or cottages, has gone through the roof in the last month or two – and will continue to remain strong.”

James Smith from the Cool Camping website estimates that there are twice as many new camping sites this year than last, with many of them on farmland. “Places are so booked up that people are struggling to find anywhere,” he says. “There are a lot of businesses that are seeing this as an opportunity and setting up sites pretty quickly.”

Simper, 54, decided to open the 70-pitch campsite after the government temporarily relaxed planning rules, allowing landowners to open sites for 36 days without planning permission. He hopes that the venture will make up for the farm’s losses during lockdown. 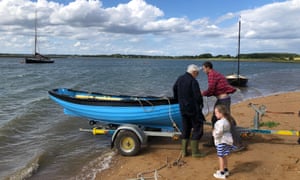 “It’s been a very difficult year,” he says, “We are fishermen as well as farmers. We stopped fishing for quite a while. We grow asparagus and our major customer is a wholesaler that sells to London restaurants, which were all closed.” Nick Moore is another farmer running a successful pop-up campsite for the first time. He opened a 10-acre meadow to campers on his beef farm, which sits on the edge of the New Forest National Park in Hampshire. “We are flat out at the moment,” he says as he oversees the Friday changeover of campers. “We are fully booked every weekend and even the mid-weeks are starting to fill out.”

Moore, 55, had been looking for alternative revenue streams for the farm ahead of Brexit. “The industry is undergoing a lot of change as we leave the EU,” he says. “We thought we’d give this a try.”

He plans to open the site again next year: “We are planning on doing this every year from now on.”

Other farmers have also had to change their diversification strategies quickly to cash in on the staycation boom. Charlie Taylor, 40, and his two brothers switched from using their farm in Banbury, Oxfordshire, as a wedding venue to a glamping site when all their 39 wedding bookings were cancelled or postponed. “We modelled cash flow and that went down pretty low so we decided we’d better do something,” he says. The site’s eight bell-tents and single shepherd-hut are fully booked each weekend in August. But the brothers, who grow crops and rear sheep, will still be down year on year. “It is peanuts in the grand scheme of things,” says Taylor. “One wedding gives us £10,000 whereas the bell-tent income is about £11,000 in total – we are expecting £25,000 when all is said and done.”

Large country estates are also planning to invest in the new holiday accommodation. Rupert Bathurst, the fourth Viscount Bledisloe, who owns the Lydney Park Estate in the Forest of Dean, is considering adding shepherd huts and a two-bedroom treehouse to the grounds. “There clearly is a much bigger appetite for country stays,” he says. “We already got a converted water station. I’m very keen on building a water tower on stilts up in the woods to continue industrial water theme. People are looking for a story and fun rather than just a box.”

Bathurst, whose family has farmed Lydney for generations, says that the estate needs to diversify as it is far too dependent on fluctuating milk prices, which fell when cafes and restaurants closed. “Our businesses have been hit quite badly. We were looking at getting 30p per litre for our milk. We got 24p because the demand just wasn’t there.”

Back in Sussex, Simper is already taking bookings for next August. He loves sharing his beautiful home with campers: “I am much more gregarious than most farmers. I love talking to people. I enjoy it.”